With every flow of the currents


Which novels written in Tagalog language deserve to be translated?  This was not easy to answer if, like me, one's reading of Tagalog novels was limited.

We could turn to prominent critics and translators like Soledad S. Reyes and Virgilio S. Almario whose literary criticism on the subject was extensive and authoritative. However, I have not yet encountered an essay from these two critics which discusses which Tagalog novels are most worthy of being translated and shared to a global audience.

An indirect answer to the question, however, could be find in an essay by Almario in Unang Siglo ng Nobela sa Filpinas (One Hundred Years of the Novel in the Philippines), published ten years ago. He came up with a "suggested reading list of novels for high school students" (mga nobelang kailangang ipabása sa mataas na paaralan). 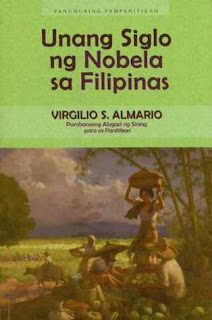 In the tradition of The Modern Novel and (the now retired) The Untranslated, I submit the list of books made by Almario. These are the 15 novels translators should be considering for their translation project, readers should waste their time with, and publishers should be commissioning.

Almario readily admitted that this is just a "starting list" and it is “incomplete”. He further stated that novelists such as Francisco, Pineda, Reyes, Lingat, and Arceo – those marked with asterisks above – "have to be represented by their other brilliant works so that they could be better appreciated as the leading Tagalog novelists of the 20th century" (nangangailangan ng iba pa niláng nobela upang higit na maipakilála ang kanilang talino bílang mga pangunahing nobelista ng ika-20 siglo). He then considered adding to the list Edgardo M. Reyes's other notable novels:


Almario, however, deemed his original list "sufficient enough" for readers to trace the development of the Tagalog novel in its first hundred years of existence.


(The list contains novels deemed excellent with every flow of their currents and that can stand alongside the great novels of the world. One may note that my reading list ends with the Martial Law period. If the investigation of the novel must continue beyond this, it is important to note the significant contributions of Lualhati Bautista, Jun Cruz Reyes, Jose Rey Munsayac, Abdon M. Balde Jr, Luna Sicat [Cleto], and Alvin Yapan.)


Half a dozen novels from the list were already available or forthcoming in English translation.

Note that three of these novels appeared in translation in the previous year – The Last Timawa, Timawa, and Canal de la Reina. I have read these three in either original Tagalog or translation. All were rendered in English by the same translator and brought out by the same publisher.

Another novel by Lazaro Francisco – The World Is Still Beautiful (1932) – also came out last year from the same university press. It is likely I will post reviews of these four in this blog.

Note that, in an assumed historical or linguistic context, "Tagalog" language and "Filipino" language may be interchangeable. Any error about this assumption was entirely mine. A recent essay by Almario (lengthy PDF) gave scholarly insight on this.