Stones are fluent in the language of stones

Sometime in the twenty-first century, the computer programmer and poet Marlon Hacla created the robot Estela Vadal--a machine who has the capacity to churn out poems in Filipino language. The poet had already edited and published the works of his 'protégé' as Ito ang Pangalan ng Aking mga Dila (Here Are the Names of My Tongues) (Magpies, 2017). 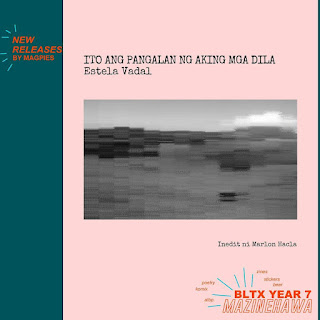 Human Hacla spouted lines that shocked the meta-critical Gedankenexperiment establishment. He produced unique combinations of words that seemed to hinge on an invisible engine or mechanism that made humans human.

(This clickbait intro may have overstayed its welcome at this point.)

This body, stuffed with nightmares
a nesting ground for hawks, swollen
with intractable blues, if only I could solicit
a new shape for you, if only you would scintillate
like a word. [p. 3]

The opening bars of Melismas by Marlon Hacla, translated from Filipino to English by Kristine Ong Muslim, began like an innocuous dark liquid seeking a new shape inside the body that drank it. The air itself was reeking with disaster or catastrophe. Each poem (or fragment) appeared to be a missive to someone, the self or a lover, like in this one addressed to this body, the self's body or a lover's or a poem's--there was a muse but his/her identity was a mystery. And it was not clear if the love was reciprocated or unrequited. Some poems were directly addressed to a certain "my love" in verses that fluctuate between antagonism and desire.

The bilingual collection dropped last year in the middle of a pandemic when the world was (still is) viral with inner frustrations and invisible agonies. The signs of times were weighing heavily on the poet's (and translator's) minds; even if the forms of tragedy were different and site-specific, the instances of mental civil wars were universal. The poems fumbled and ambled along through surprising images and detours, tonal shifts were abundant and jarring, and the conflicted poetic persona always circled back to his lover. The body stuffed with nightmares may as well be dead and decaying. But the speaker was trying his best to retrieve the worth or value of a word.

... This is how I will carry on:
lightning storm that enters a creek, dyed seraphim,
bottled scorpion. The times have been insinuating
scores of uprising, but how can I possibly turn my back on
you if I have not yet finished describing all your transgressions? [41]

Hacla's "love poems"--who dare say they were not poems of love? should one say love-hate poems?--were often checked or jolted out of traditional lyric poetry by a form of woke poetry. There were indications that the poet could not hold back his feelings due to the force of his enamoramientos (infatuations), and that the object of his affection held sway over his peace of mind with a hyperbole-inducing force.

... I have no more use
for you but each time I discard
the list that condones your utility,
a rice paddy's hue turns pale, blankets are suddenly blown away
to reach every layer of the sky. [53]

The tonal shift from lyric to 'woke', usually near the end of the fragments, was a paradigm shift from pure symbolic/imagistic poetry to a healthy dose of pragmatism and skepticism. The soundtrack of Melismas the musical was rehearsal music for unspecified and abiding terror or madness: "Across the street, / cellists carry on / with their exorcism" [73].

Everywhere, shaded areas are agitated,
stones are fluent in the language of stones.
From behind, the water is arching for a bite.
The sky is scattering bits and pieces of itself,
the birds are colliding tenderly,
the stars are assembling a mirror.
Through windows, children are watching
the night's pretension, no matter how weak
the grounds sustaining the source of this
continuity, nor will the flood
of luminaries in the country lead to progress
and strength of purpose in order to see
this radical shifting of the world.
For now, not far from here, these two are being honed:
the weight of the wind to enhance
its destructiveness and then a new song. [51]
There are things to unpack in the journey of that poem from dark lyricism (shaded areas; water ... arching for a bite; birds ... colliding tenderly) to a swipe at the flood of useless luminaries running the country to a "radical shifting of the world", and then to a final duality of destructiveness and music. Whatever meaning could be attached to this fragment had to be tied to the atmosphere conjured by spontaneous ideas and images. The poet worked his way by establishing associations and accumulating details that strive to "scintillate / like a word".
The riffs alternated between mundane observations and pragmatic pronouncements. Each of the poems was untitled, forcing the reader to take each composition not as an individual gesture of an image or sentiment but a part of the larger articulation of existential despair and struggle. The monochromatic black and white illustrations by Tilde Acuña were like a reprieve between the acts, dividing the fragments into manageable sections while adding their own apocalypsis flavor into the mix.
It was as if the robot was a huge influencer of his creator's method. The images used were plenty; they came from behind. Abstract concepts were bent into concrete significations. The words scintillated like stones, "fluent in the language of stones". Hacla seemed to have borrowed the enigmatic one-character-at-a-time ejection of poetical texts by Estela Vadal. His compositional blocks were air pushed out of a monolithic cave, the phrases flowing from the subterranean river-like consciousness. The cave was actually just part of a caves complex, which extends inland into a network of limestone formation. Melismas was a massif.

In the parallel universe, I imagined Estela Vadal creating a translator machine to rival Google Translate. This machine learned and adjusted her output through the compositional choices of translators before the fifth industrial revolution. Vadal called her machine Kristine Ong Muslim whose output was an experience apart from the original Filipino conception of meaning. The robot made bold choices, spurning literalness and interpreting the musika of language, shifting it to a new musical arrangement. Her lexical unit was not a word or a line but the entire fragment--creating fragmentary meanings. Her lexicon was the entire crescendo of the collection, creating a consistent voice for a translation that was not robotic but melismatic, not merely good but badass.

Take, for example, the poem excerpted in Bosphorus Review of Books (link: https://bosphorusreview.com/from-melismas). Music carried the poem despite the fear and paranoia and the threat of extinction.

... Suppose I imagine
birds, will that conjure birds?
If I visualize paradise,
will that render visible the wind's unseen machinery,
will that produce names for all kinds
of wounds to make plain the level of damage wrought
to the environment, to explain the water rise
going beyond the expected limits
assuming we can still consider as limits
the coiled ropes and upright pickets of my unease? [p. 79]

Melismas was an accretion of details that flowed into the structure of a modern musical (Hamilton, not Miss Saigon). Amado Anthony G. Mendoza III's introduction to the book made references to poets Arthur Rimbaud, the Indonesian Chairil Anwar, and Roberto Bolaño. I would like to propose Nicanor Parra's anti-poems as an additional pole of reference, not for the content but for the anti-establishment ring of truth. Hacla could make obvious the constructedness of a poem wherein a poet's imagining (or imaging) of birds was its own conjuring. And the acknowledgement of a poem's limitation (and by extension the poet's limitation), through the admission of the futility of words in the face of "coiled ropes and upright pickets" of personal unease, were an acknowledgement of the truth behind poetry's inability to save the world, whether to address climate change impacts, like sea level rise, or environmental degradation, or extreme events.

True to their title, the poems were characterized by jazzy, free verse musicality and in some lines even sustaining the prolonged riffs and runs into various movements. The short fragments that started the collection, with their stray images and fleeting conjuration of words, gave way to--or was terminated by--the last three poems which unfurled like freestyle rap-verse outpouring of lines. The short poems in the beginning were just splinters of open-ended thoughts, seeking the shape of the mind vessel. The final sequence was a succession of three to five pages-long poems that rhythmically hammered images upon images and thoughts upon thoughts, perfecting the riffs with a floodgate of emotions and unease and passionate love and almost undisciplined temper and intimate moans, the ones you utter or hear at night, when the body was stuffed with nightmares, and words conjure themselves out of a subterranean river of consciousness, building into a limestone massif.

My favorite piece was this:

Since it is once more the season of thorns,
the children are yet again wounded.
And in the absence of inclement weather,
rooms begin to dance, books
fling themselves wildly
across the floor.
Towards the end, lives are improved,
wounds dry up fast
despite the humid heat. The memories
have already settled down as wall pictures. [81]

I liked how in a few short lines, how in a short progression of images (thorns ... children running ... getting wounded ... books flinging ... wall pictures), time contraction was accomplished, radical transformations (lives are improved, / wounds dry up fast) took place in a single place, in fast-forward fashion. There was movement there. There was forward motion visible in the books flinging wildly across the floor. The verses were hurtling toward an outcome that in itself was a kind of regret. From children running around and getting wounded, to pictures on the wall memorializing the summer days when children ran around and got wounded. The articulation itself was the act of conjuring birds, when imagining things was the same as spinning them out into reality, as if "render[ing] visible the wind's unseen machinery" [79].

The poet acknowledged the limitation of metaphor and poetry to create the world firsthand, and it was that humble acknowledgement of the inability of poetry to express everything that made the lines ring true. The prolific Estela Vadal would approve of the image-pile, the ambiguity, and the lyrical conviction. She must be a proud mentor to her creator and his translator.

In some random multi-verse where an Estela Vadal creates a Marlon Hacla, an NI (natural intelligence) poet, the perennially clickbaited "sanaol" generation of consumers weaned on pop culture merch, digital products, and bingewatched K-drama series would be moved by poetry that could still hold a candle to the rhymed yearnings and universal pinings for a perfect musical love story.

Corollary. One must read and reread Hacla. 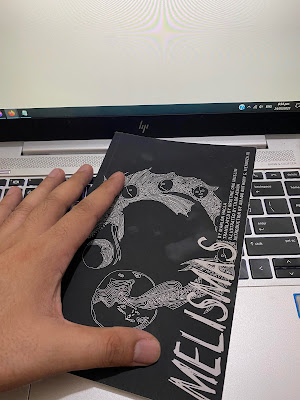