Resisting the aesthetics of resistance

In a survey of translated Philippine novels, I mentioned an extant translation of the 1906 novel Banaag at Sikat by Lope K. Santos, as mentioned by N.V.M. Gonzalez in one of his essays in The Novel of Justice. The translator was Mariano C. Javier who incorporated his complete English translation of the novel in an unpublished 1960 master's thesis from the University of the Philippines called A Study of the Life and Works of Lope K. Santos, with Special Reference to Banaag at Sikat.

Some eighteen years had passed since the writing of [Noli Me Tangere by José Rizal], and Tagalog intellectuals in Manila were following a newspaper serial entitled Banaag at Sikat (Glow and Sunrise). A long discursive narrative, it offered readers progressive ideas barely disguised by a contrivance of romantic events.

Its author, Lope K. Santos (1879-1963), was not a newcomer to romantic fiction in Tagalog. As a printer's son, he had worked on galley proofs and written several love stories for the trade. To Mariano C. Javier, he was to describe years later how he turned schoolteacher and newspaperman. Javier set down the story as a preface to a critical reading and a complete English translation of Banaag at Sikat, the first attempted in fifty years. To his firsthand experience in the labor movement, Lope K. Santos added the knowledge he had gained from reading some four hundred books by such authors as Vicente Blazco Ibañez [sic], Ruben Dario, Karl Marx, Victor Hugo, and Leo Tolstoi. Although Javier may be correct in saying that Banaag at Sikat is essentially a long definition of socialism, this novel remains the most ambitious single effort of its day in Tagalog prose. The work did not find readers too readily, and Santos' printers hounded the author.

The book did win a measure of recognition for its author, for it appeared when labor unions were beginning to be organized in secret and when it was nearly seditious to speak about mounting a strike.


Banaag at Sikat surprisingly did not figure in the canonical list of novels compiled by Virgilio S. Almario as recommended reading for high school students. Almario did mention that Lope K. Santos's novel was a pioneer of the so-called novel of resistance (nobela ng pagtutol). Perhaps the very monolithic structure of the novel, notorious for its ideological concerns, and despite its romantic pretext, was not easily appreciated by high school students but rather by advanced readers.

The subject matter of Banaag at Sikat (the title can also be roughly translated as "Dawn and Sunrise" or "Silhouette and Radiance") was labor unrest. Apparently a novel of ideas, the book was replete with Marxist rant and dialectics, in seemingly never-ending protest. It inspired some commentaries from novelists and literary critics, but aside from the biographical work and translation thesis by Javier, it was only recently that a book-length critical appraisal appeared: Banaag at Sikat: Metakritisismo at Antolohiya (2011) by Maria Luisa Torres Reyes. 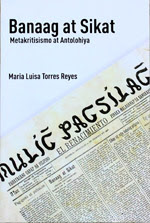 A Manila Times book review by Elmer Ordoñez of Torres Reyes's "metacriticism" and anthology can be read here. Ordoñez considered Santos's novel as the first proletarian novel in the country. His review provided a summary of the critical reception of the novel and additional background on the book:

As editor of Muling Pagsilang, the Tagalog version of El Renacimiento, Santos published in his weekly journal excerpts of his novel Banaag at Sikat for almost two years – read by the intelligentsia and the workers involved in struggle in the first decade of American Occupation. The novel was issued in book form (1906).

Lope K. Santos took over the labor movement, together with Crisanto Evangelista, Herminigildo Cruz, and others when Isabelo de los Reyes and Dominador Gomez were arrested for leading mass actions of workers in 1902 and 1903 respectively. Both leaders of the Union Obrero Democratico de Filipinas were “balikbayan” [returning from overseas] ilustrados who brought with them books on socialism which circulated among nationalists and labor leaders. Santos peppered his novel with discursive passages – uttered by progressive characters like Delfin and Felipe and in exchanges like those between Delfin and lawyer Madlang Layon — alluding to socialist thinkers like Marx and Engels, Bakunin, Kropotkin, Proudhon and Malatesta.

There was renewed interest in the 30s when Teodoro Agoncillo commented that the novel was a “socialist tract” implying it was propaganda and not “literary.” The ‘formal’’ weaknesses (e.g. the didacticism) of the novel were echoed in Juan C. Laya’s review in 1947, and those of Romeo Virtusio and Vedasto Suarez in the 60s, and Rogelio G. Mangahas in 1970. Epifanio San Juan, Jr. using the Marxist approach wrote that contrary to what critics had said about the long speeches, the latter were integral to the thrust of the socialist novel. [emphases added]


A new translation of Banaag at Sikat was recently commissioned by Penguin Random House as part of its curated Penguin Classics edition. This will only be the sixth Filipino book to grace the imprint, after the Harold Augenbraum retranslations of José Rizal's Noli Me Tangere and El Filibusterismo, José Garcia Villa's Doveglion: Collected Poems, reissue of Carlos Bulosan's America Is in the Heart, and Nick Joaquín's The Woman Who Had Two Navels and Tales of the Tropical Gothic.


Danton Remoto will translate the novel. His translation work includes the Filipino version of The Fault in Our Stars by John Green and Tuesdays with Morrie by Mitch Albom. In two articles in his column in Philstar.com, he shared the challenges expected from translating this novel and his approach to translation, describing the old debate on foreignizing versus domesticating approaches to translation. In the first article, Remoto quoted at length from Bayani Santos Jr.'s essay (which prefaced an English translation of the first chapter of the novel). The full text of the essay and translation can be found here (pdf). Bayani Santos Jr. was the grandson of Lope K. Santos.

I disagree with Bayani Santos Jr's conjectures (quoted by Remoto) that "Western authors and critics of recent contemporary leanings are against long essayistic remarks of characters that tend to reflect the position of the author with the arguments presented and represented by the characters. The translator is faced with the choice of adhering to the original text and intent of the author, or resorting to the simplification or corruption of the text, with the expurgation of long dialogues" [emphases mine]. The first statement is a hasty generalization, the second is a poor practice of translation.

I also have reservations on the path Remoto wanted to take in his translation:

I will have to follow the route taken by the late ambassador and writer, Leon Maria Guerrero, when he translated Noli Me Tangere and El Filibusterismo “for a contemporary audience.” His translations were published by Longman Publishers in the UK during his tenure as our ambassador to the Court of Saint James. To ensure the smooth flow of the narrative for the modern reader, Ambassador Guerrero edited the prolix scenes with long dialogues that sound like speeches and essays. Since the translation I will be doing is for the modern readers, challenged as they are with limited attention spans and an aversion to slow scenes, I will go for a faster pacing by pruning sentences that do not move the story forward. [my emphasis]


As a modern reader, I am sometimes challenged with short attention span and oftentimes averse to long-drawn-out scenes. But I would not mind reading a slow-paced work.

Remoto's model in León María Guerrero may be misplaced. In an essay from The Spectre of Comparisons: Nationalism, Southeast Asia, and the World, Benedict Anderson handed down a harsh assessment of Guerrero's translation of Rizal's novels.

Translations of Noli Me Tangere into most of the major languages of the Philippines were bound to fail, not merely because of the absurdity of the many Spanish characters "speaking" in Tagalog, Cebuano or Ilocano, but because the enemigo readers automatically disappear, and the satirical descriptions of mestizos and indios speaking bad Spanish, and Spanish colonials slipping into bad Tagalog, become untranslatable. The most important American translation, done by the alcoholic anti-American diplomat León María Guerrero in the 1960s—still the prescribed text for high schools and universities—is no less fatally flawed by systematic bowdlerization in the name of official nationalism. Sex, anticlericalism and any perceived relevance to the contemporary nation are all relentlessly excised, with the aim of turning Rizal into a boring, long-dead national saint.


Anderson's full essay, "The First Filipino", first appeared in London Review of Books. His more detailed criticism of Guerrero's translation approach could be found in "Hard to Imagine", another essay from The Spectre of Comparisons.

In the second article, Remoto reiterated his general approach to the novel to cater to "21st-century readers":

Written in long and florid Tagalog in 1904, the novel skewers the capitalist system introduced by the Americans, and advocates a strain of socialism to level the playing field in the land. The executive editor of Penguin said that they have asked around and my name kept cropping up as a translator “whose works sell,” that is why they are offering me the job. I answered that my last translation work was “Tuesdays with Morrie,” the gut-wrenching novel about a teacher and his student and, yes, my translation did well in the box office, I mean, the book stores. But it’s no guarantee that the next one will also fare as well.

Nevertheless, I read through Banaag at Sikat again, this tome of more than 600 pages, and decided that I will write a translation for the 21st-century reader. Thus, I will telescope the characters’ long debates and speeches into short bursts of digestible prose, with the point and the sharpness intact. [emphasis mine]


Not to give a preemptive strike on the process and the product, but the strategy sounds like just the recipe for a watered down version of the novel, less difficult, less demanding, less stylish, less powerful.

While I am not expecting a novel in the same vein as The Aesthetics of Resistance, volume 1, by Peter Weiss, translated by Joachim Neugroschel, I am at least expecting a faithful rendition of the dialectical forces that shape the novel's form. Maybe Remoto might reconsider his translation strategy and consult Joachim Neugroschel's labor of translation, so uncompromising and yet so rewarding.

I have a copy of Banaag at Sikat in the Tagalog original, a recent reprint, all of 600 pages. I will at least try to read this slow-paced, sentimentally romantic, difficult, and boring novel. Given the approach Remoto was contemplating for the translator's task, I may already have given up on the translation. The fault is in the stars.