Eight Muses of the Fall 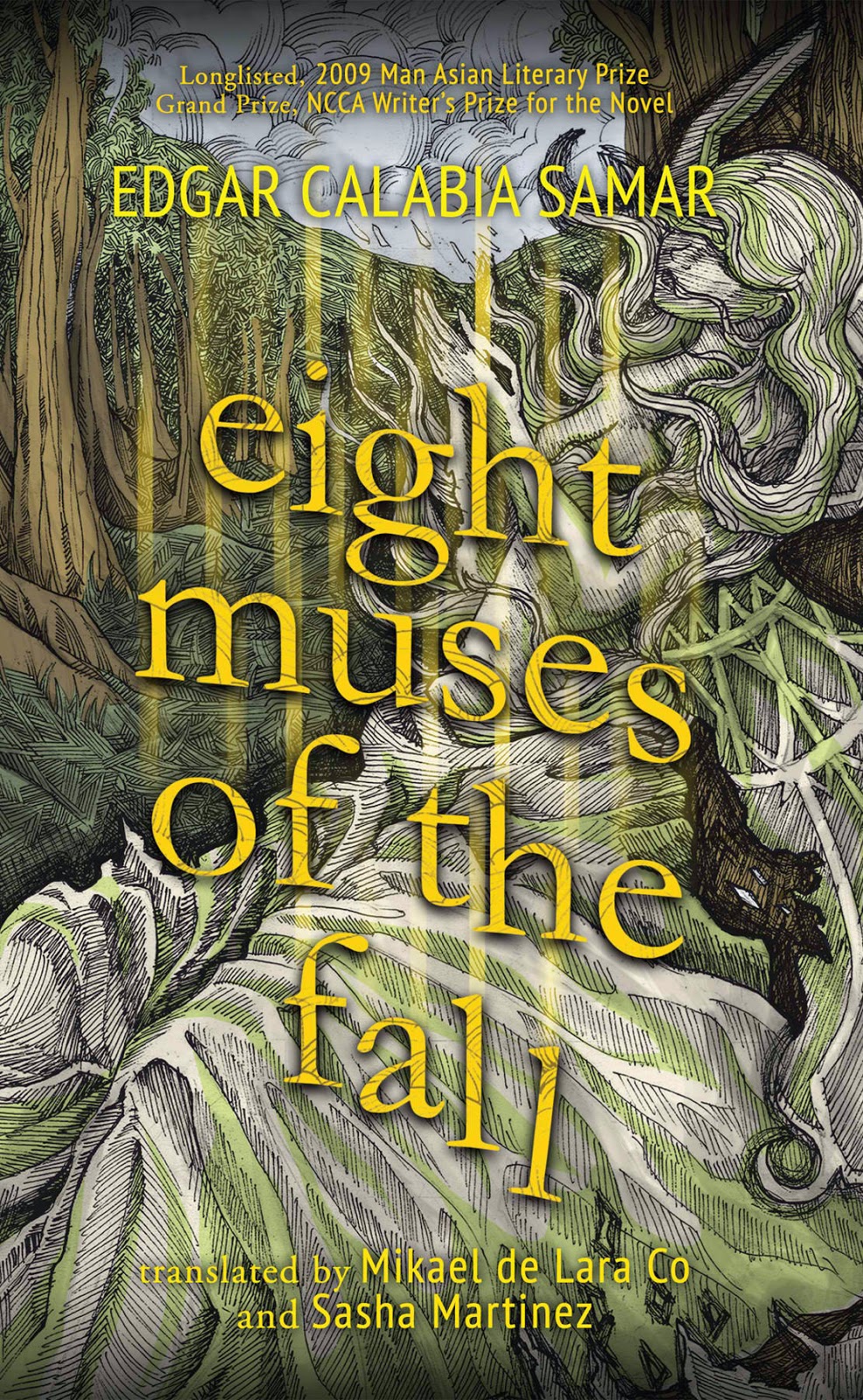 Maybe now, he thought, he'd have the confidence to begin writing his novel. He had written a story, after all. A story that, even though it had nothing to do with Atisan, was a story nonetheless.

Eight Muses of the Fall (translation of the novel Walong Diwata ng Pagkahulog) was a first novel about a writer trying to write his first novel. In the process of thinking about his plot and characters and being diverted into many plot strands, and being fundamentally conscious about his efforts in writing and discovering if his true vocation is as a writer, the writer miraculously finished his work. The novel I was reading and holding in fact was the product of such roundabout telling about some young adult adventures and first love and local myths and legends. Yes, it was that kind of story, told in a dry, humorless tone of a first person narrator whose utter self-absorption was a perfect stand-in not so much for the selfie but for the meme phenomenon.

The "fall" in the title pertains to the literal free fall. The "muses" were the writer's creative inspiration although the original Filipino word (diwata) is closer to "fairies" in meaning, in the sense of mythic female beings with magical powers. The "eight" was a reference to the eighth life of a cat with nine lives, apparently hinting at the final act of an artist producing his life work and living his last life on earth. For a true artist, every creative work was a leap of faith into unknown territory. A kind of metaphorical death awaited him after his latest creation was ended by the final period. To produce a work of fiction is to escape the realism of reality. To freely fall into the abyss, to embrace the exhilaration of freedom.

It was only when he was sure that there would be no escaping the fall that Daniel felt a sense of loss, of regret. Why now, he thought, why did he have to die now, when, finally, he had a story to tell.

The story, to the novelist's credit, was told in a non-linear, spontaneous manner that recalled experimental writing. The materials of the novel were being excavated and found on the spot, or told on the spot, becoming the immediate constituent parts of the novel itself.

"Only water can mirror the skies. I will give you the earth, earth that could reveal the faces of sky that are hidden from water." The thought made Daniel happy, despite the fact that, still, he had no idea how to give the earth to Orange. He wrote it down in his journal, knowing that one day, he'd be able to use the line. If not in some love letter to Orange, some forlorn conversation, then maybe in the novel he was planning to write.

[Daniel] just told his Uncle Tony that he was not yet done with the story [he had just shown his uncle to read; a story that preceded this conversation with his uncle], and he was not just trying to make a version of a legend. That it was actually a part of the novel he's writing.

"Here we go again," smiled his Uncle Tony. "One day, I hope to finally see a chapter of that novel."

Who would have thought that that line and that story, the passages that the budding writer Daniel could not get out of his mind, would find its way into the novel that I am currently reading?

Even though there were nights when lines from this poem would rouse him from sleep—"We forgive the sadness of others/ when they don't mean it, we nudge/ their loneliness as we hurry// to cross streets, or find/ them looking over cliffs/ as we do..."—he never got up to write these lines. He would let sleep carry him off. The next day, as he woke, the lines would be lost, and not even a memory of the poem would be left in his mind.

It was too late. The writer had already written the lines, so the act of forgetting was here a mere artifice. The act of writing had preserved the lost lines of the poem, safeguarding it for posterity. In fact, the lines were now a component part of this species of novel-about-a-writer-writing-his-first-novel. The novel's studied aimlessness was a literary feint. It simulated journal writing when it recalled with a somber voice the young writer's friendships and disappointments. It was a raw, naturalistic style, mired by characteristic redundancy and much belaboring to make its point.

The character Daniel was known by many names. His monikers and nicknames were like masks worn to test the various fantastical stories he would invent. Every character he encountered was treated like a character in his novel. Every variation or double of a character was a composite character. Every plot point was plot point he wanted to insert into the fictional fabric. Because we are actually reading the novel he was trying to write, because he was stitching  the story he was at great pains trying to unleash into being. Because character. Because novel. Because story.

Thence, Daniel's self-absorption became the archetypal portrait of a young artist, the clichéd search for one's identity, one's place in the world. Again, to his credit, Edgar Calabia Samar used the (my) favored framework of spontaneity to tell his storyteller's story. He used language as a distancing medium to temper the contents of (or answers to) what practically amounted to long form slam book.

It was difficult, not being able to drag other people into this world of his.

By his own admission, Daniel recognized the limitations of his "experiential" storytelling even as he marched on to tell what he had started, what he had set into motion by dreaming up an unwritten novel and attempting to carve it out from blank page after blank page. He took Murakami Haruki as his literary model, even quoting the writer, "But life is, more or less, a waste of time." Their aesthetic was certainly similar. Daniel even copied elements in Murakami's fiction such as cats, wells, and twins.

Like Murakami, the narrator was holding up the trivial and the non-political. Like his own protagonist, Samar is providing an alternative reading material, or an alternative template of the novel, that resisted the themes and preoccupations of "great torrential works of art".

He just needed to eat, to sleep. To write. Sometimes, to be able to write is enough. But when did politics seep into the way he saw things? And did this really happen? The truth was that he thought of little more than his own life, his own survival. Everything revolved around his own life. No social forces, no class struggle. His life would not have failed the realistic criteria of the great works. Unlike the great novels of the Russians in the past centuries.

Perhaps that was why he found it hard to write. He had turned his back on the material conditions of his life. He lived exclusively in the world of the imagination.

However much he extolled the freshness and rawness of stories children tell as opposed to stories by adults whose stories are already "whole", Daniel would soon discover that it is very hard to escape the politics of existence. And so one can not escape from the tyranny of history and adult experience. And it would indeed be very bleak and boring to only celebrate the trivial and the ordinary. And fragmentary or not, raw or formulaic, stories are a whole unit of feeling. And the writing of a novel is not an act of writing but a discovery of soul.

I read the English version of the novel a year after reading its original, Walong Diwata ng Pagkahulog. The two collaborating translators—Mikael de Lara Co and Sasha Martinez—successfully reproduced the tone and lyricism of the original work in English. But I thought Daniel is a bit more likeable and less self-absorbed in the English translation than in his original counterpart. They were not really the same person even though they were immersed in the same story they set out to know and discover. Because reader.