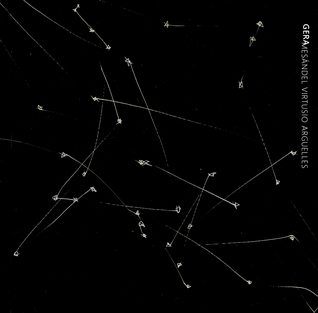 The title Gera was abbreviated from Gerilya, the 2008 novel of Norman Wilwayco. The poet Mesándel Virtusio Arguelles prepared his black highlighter pen and attacked Wilwayco's novel. Like what he did in Pesoa (2014), derived from Rene O. Villanueva's childhood memoirs Personal, he crafted yet another constellation of erasure poetry, redacting to his heart's content, assiduously leaving out extraneous  material, contracting blocks of narrative into floating words. He ruthlessly deconstructed Wilwayco's novel and murdered the past. He declared war against semantics to construct a new monster.

Arguelles made gera with all but one part of speech. The leftovers were highly selected verbs. He verbed the novel into submission. He prosed the lines into annular eclipse-like concealment. He warred against the notion of novel(ty) to produce poetry. And then, after doing the deed, as with Pesoa, he then set out to print a book where verbs appeared on white pages, with the original black redactions now dissolving into the white spaces. He hid the telling evidence of his heinous crime. White stone on a black stone. A humument to humeri. Readers who have no copy of Gerilya at their disposal would have no way of ascertaining the veracity of erasure. They would just have to take the poet's word for it.

Write with nouns and verbs, exhorted Strunk and White. The poet Arguelles took it to another level. He fixated on verbs, verbatim from Wilwayco's transgressive novel. Whether verbal abuse or verbal ruse, the unpaged verbs were clothed in a continuity of variegated tenses – past, present, future, past perfect. The process was bared without map or compass. I would have to take the invisible on faith.

In poetry, context was useful. But here context was a mere pretext. It was not the end-all. Experimentalism was the subtext. The violence of erasures left yawning gaps of white spaces that buried the subjects and predicates. The seemingly random placements of verbs evoked the feeling of dislocation. All words may be verbed, said Stan Carey. But I must tell you the experience of reading an all-verb book was quite an un-verbing feeling.

Below is an excerpt from a random page. I could not say what exact page since, as mentioned, the book was not paginated. The word locations are only approximate.

I suppose I do not need to translate the specific page of Gerilya book to translate the above passage from Gera. No matter how I see it, replicating the process of erasure – this time on the translated page – would not produce a good approximation since the exact placement of the above verbs in the original would never correspond to spatial orientation of the verbs in translation. Talk about the impossibility of spatial alignment in translation, no less than the impossibility of perfect translation, the impossibility of Walter Benjamin's dream. (The poem's preface quoted Walter Benjamin: All language communicates itself.) The complete translation would breed another warlike species of monster. Anyway, a translation of the above would read: conferring ... commencing ... comes ... drinking ... weighing ... tell ... discuss ... Suppressing ... gnashing ... watered ... savaged ... sat. Yet another page can be translated – without reproducing the jumbled positions – as: waiting ... covered ... Palpitating ... boiling ... chose ... sided ... robbed ... lighted up ... rising ... starting. It was obvious to me that the original verbs were more forceful and thrilling than their translation.

The Filipino word for verb is pandiwa. Diwa means spirit. As constituent elements, the verbs were the vital life force that gave rise to the book of poetry. The book's epigraph, borrowed from Anne Carson, announced that Verbs are savage. But the aftermath of savagery is what? Beauty? Redemption? Regret?

Imagine pages and pages of this silent verbosity. The violence was staggering. I planned on taking pictures of a few pages but I have no camera on hand. You will have to take my word for it.