I remember sometime in March having watched an interview of a French government official who wants to pass a bill in their parliament about the compensation for victims of nuclear testing in the Pacific atolls in . This will pave the way for recognition of accountability of a nation of their previous harmful activities and will serve as a strong warning of the dangers being posed by nuclear arms.

The word ‘mass’ has punning and permutating meanings. The scientific (physical) definition is debatable but we commonly understand it as the property that measures how heavy an object is. Newton, in his second law of motion, equated force as the product of a particle's mass and its acceleration. Einstein, on the other hand, in his general theory of relativity defined rest energy as the energy of a particle equal to its mass multiplied by the square of the speed of light. The speed of light itself – roughly equal to 300,000 m/s – is so large that it's hard to believe that it defines the upper limit of how fast a particle can be accelerated. Any particle accelerator is bound to approach the value of the speed of light but not the exact value.

Are we all the better then for the achievement of Einstein in improving upon Newtonian mechanics and ushering in modern physics?

Here lies the great paradox in Amis’s collection of stories, the perfectly titled Einstein's Monsters: that men has advanced scientific knowledge, but applied it to ever backward, unethical, and immoral pursuits. As Amis pointed out in his preface to the collection: Einstein's monsters refer not only to nuclear weapons but also to ourselves. “We are Einstein’s monsters, not fully human, not for now.” Amis's criticism of the present nuclear world is short of a criticism of intellectual human heritage. It is a powerful criticism of human nature in the face of self-destruction.

This is not to blame Einstein for conceiving and setting into motion a paradigm shift from a pre-nuclear world to a nuclear world. In synthesizing the behavior of particles and pulling the rug from under Newton’s nose to produce what has to be the watershed theory in physics, Einstein unwittingly(?) altered the behavior of man. It is the interpretation of his theory, its demonic application and perverted disposition that has put us in a quandary of global insecurity among nations. , , , , . These nations are the most forward and the most backward at the same time. We can’t blame Einstein, but we can blame his monsters, ourselves in fact. It is not too late to hope that we, potent 'weapons' in our own right, can be fashioned into articulate dismantler of nuclear weapons. 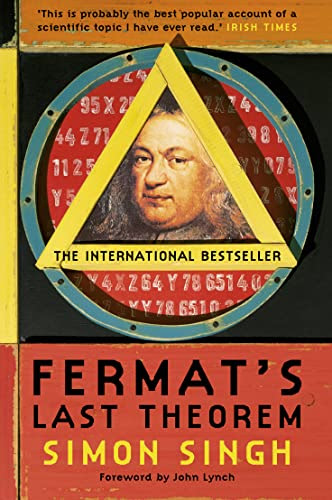 Yesterday I finished reading Fermat's Last Theorem. I plan to write a glowing review of the book but the space of this blog is too limited to contain it.
Posted by Rise at 7:02 PM 0 comments

The latest conquest (more than a week ago) in the ring by Filipino fighter Manny Pacquiao reminded me of the third part of Roberto Bolaño's novel 2666. The segment, called "The Part About Fate," is about one sports journalist, Oscar Fate, sent down to Sta. Teresa, Mexico, to cover a boxing bout. He was commissioned to cover the fight as a last minute replacement of a colleague who died.

What particularly struck me between the two fights (the real and the fictional) is the similarity with which they prematurely, and definitively, ended. The report by the Los Angeles Times contained this one-paragraph summary of the fight:

The fight summary is one paragraph. Pacquiao knocked Hatton down twice in the first round, dominated the second and caught Hatton with a vicious left hook as the round ticked down. Hatton's eyes rolled back and his body fell, like a sack of potatoes, flat on his back. Referee Kenny Bayless knelt over him for several seconds, then waved his hands, with one second left in the round, to signify that the fight was over.

Here is how the fight transpired in Bolaño's book:

The fight was short. First Count Pickett came out. Polite applause, some boos. Then Merolino Fernández came out. Thundering applause. In the first round, they sized each other up. In the second Pickett went on the offensive and knocked his opponent out in less than a minute. Merolino Fernández’s body didn’t even move where it lay on the canvas. His seconds hauled him into his corner and when he didn’t recover the medics came in and took him off to the hospital. Count Pickett raised an arm, without much enthusiasm, and left surrounded by his people. The fans began to empty out of the arena.

Both fights ended in the second round via a knockdown. In both instances the boxing watcher and the novel reader, after relishing every bit of the swift action, asks himself, That's it? That's the fight? One couldn't help shaking his head at what Pacquiao in the ring, and Bolaño on the page, just accomplished. It's as if the climax of the two matches is also its anticlimax.

The effectiveness of Bolaño's single paragraph is evident from its deadpan delivery and impeccable timing. The context of this passage is similar to the lengthy hype prior to the Pacquiao-Hatton tilt. A documentary by HBO, “24/7,” featured the rigid training of the two fighters, their daily regimen, their personal lives, and the assessment of their respective combative trainers. In the book, the hype also builds up as Oscar Fate interviews the fighters, their trainers, and the bettors ready with their fearless forecasts.

The paragraph is all the more telling because it announces the meeting of Oscar Fate with Rosa Amalfitano, the daughter of Prof. Amalfitano, the main character of the second segment of the book. From then on, there is no more talk of boxing in the rest of the story.

In the same way that Pacquiao emerged as the best pound-for-pound fighter in the sport, does Bolaño carve for his own a portrait of the artist as a prizefighter? Why not? The boxer and the writer are tacticians in their respective fields. If they are any good, they have the instinct to smell it and then go for the kill. It’s just a matter of the right combinations of feints and punches deployed not a second too late. In the ring, as in the page, perfect timing is the key.

So the day before I finished The Island. I finally had time to read the verbiage. There is too much philosophizing and painstaking narration which can weigh down the interest, though I must say that the prose is often imaginative. There’s lots of awesome descriptions and amusing digressions (on astronomy, physics, Christianity). Eco’s agility as a storyteller is evident from his skillful juggling of too many scientific, historical, and philosophical ideas.

The book explores some of the foundations of scientific thought, and most of it is presented as a drivel by Father Caspar (speaking like Master Yoda), who doggedly adheres to the geocentric view that the Earth is the center of the universe. There are already indications of the nascent thinking of Copernicus, Einstein’s relativity postulates especially on the frame of reference, some hints of present-day debates on intelligent design and creationism.

The book in parts is, to mimic its double-edged mannerism, technically exasperating or exasperatingly technical. What is exasperating is that the science is too old-fashioned and too outdated. That, for me, is what is admirable with it. I liked the way Eco attempts to role-play arguments of mad philosophers and mad scientists (they seem to be interchangeable).

Eco seems to be documenting the naiveté in scientific thinking and approaches in 17th century, and it is religion that is often the culprit in contaminating the progress of astronomy and natural sciences. Indirectly, the absurdity of religion influences scientific methods and approaches. Religion kills the objectivity of science and yet it propels it to invention, experimentation, and discovery.

On the literary front, The Island has too many to offer. The playfulness of the free indirect style, the double (In some ways, the reader is The Other too), the (slightly) intrusive narrator who wrote this novel as an ‘interpretation’ of Roberto’s writings, the open-ended conclusion. It has something to say about time, the nature of time, direction of time, the arbitrariness of scientific theories, the subjectivity of science. For a book about “emblems and devices” it has masterfully crafted symbols, most notably the Orange Dove and the unattainable .

Overall the book is impressive not so much for the writing (which is often boring), but for the ambition (which is vaulting). It has moments and passages that come alive like jewels. It is, in some ways, a tropic novel of sunlight, not the dreary old-fashioned novel bathed in darkness, although it is old-fashioned, perennially old-fashioned.

Email ThisBlogThis!Share to TwitterShare to FacebookShare to Pinterest
Links to this post
Labels: book review, The Island of the Day Before, Umberto Eco
Newer Posts Older Posts Home
Subscribe to: Posts (Atom)