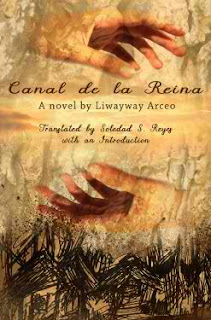 As with most Filipino novels that saw print in the Philippines in the 20th century, the novels of Liwayway Arceo (1924-1999) were serialized in a magazine of weekly circulation. Readers patiently waited for weekly chapter installments of novels in vernacular language, which at that time still commanded huge following from avid readers, when "popular culture" still had not been colonized by audio-visual media.

Published in 1972 after the Martial Law declaration, Canal de la Reina had the usual marker of Arceo's writing: narratives of family relationships and the intertwining of domestic and societal issues. The novel centered on an act of dispossession and a prayer for justice.

Caridad de los Angeles was visiting the property bequeathed to her by her parents. She was accompanied by her son, daughter, and husband. The house and lot was situated right beside a river canal. Unfortunately, Caridad found out that the property was illegally acquired and occupied by the 60-year old Nyora Tentay, a notorious usurer and opportunist in the area, who would not budge from the place. Osyong, the caretaker hired by Caridad's family to look over the house, illegally sold the property under his care. It was a battle of wills and character.

Caridad did not see the humor. The terrifying image of Nyora Tentay clung to her mind, and she could hear the harsh words spewed by the old woman. Salvador met them and he helped [Caridad] step down. "So?"

"Someone is occupying the land ... she [Nyora Tentay] claims she is the owner." Caridad was on the verge of breaking down. And she recounted what happened. "It's pointless to argue!" She complained. "Osyong made fools of us!"

"What now, Ma?" Leni asked as Caridad settled in the front seat. "Has Mang Osyong sold the property to the fake claimant?"

"That's how it looks, Leni," she was barely audible.

"Oh, she's a tough cookie," Junior joined in. "You'd imagine she's a tiger! She was full of hot air ... as if she's immune to bullets ... she looks the part of a villain through and through!"


Caridad the rightful owner versus Nyora Tentay, a foul-mouthed force to reckon with, the singular matriarch, the unwavering queen of the canal. The senyora was the dragon breathing fire into the novel's cauldron of conflicts.

From this first encounter, the novel unfolded into legal wrangling and morality play. For her part, Nyora Tentay firmly believed in the justness of her occupation of the land. Even if she used illicit means to acquire the property, her cause was valid and justified because she paid for the land.

Strange gurgling sounds were coming from the old woman's throat. She was either gathering phlegm to spit it out or about to cough. "Well ... well ... she'd [Caridad] better be careful! I worked hard to have this land. I spent so much in bribes. Anywhere I looked, I saw lots of people asking for something ... goodness! To spare myself all the paper work, I did what everybody else was doing, cut corners for a fee. So, it's not right for me to let go of this land!"


The justification for land-grabbing here was that she took the trouble of bribing people to get what she wanted. Everyone was doing it. In fighting for Caridad's right to the land, Salvador, her husband used the same method and justification as Nyora Tentay's when he resorted to the same illegal means in bribing someone.

"It's a matter of who moves first, dear ..." and he pulled her towards him. [...] He was gently squeezing here fingers. "Our lawyer explained. That is the system in this country; it has sunk to this level. It's enough to make your stomach churn, but with the way things are, we have no choice."


Salvador's moral justification for expediting the case was no less grave than Nyora's. The whole system was corrupt. Patronage was the only recourse to get what one wants. There is no other choice.

In Nyora's case, another variant of the morality of her action was predicated on her economic dependence on usury and land-grabbing for her livelihood. It was the reason she continued to fight Caridad and desperately clung to the land despite the probabibility of losing in court.

"Ah ... uhm ..." and the old woman swallowed hard. Her forehead automatically knitted. She was bright enough to see how serious her problem was. "Well ... about ... about our case," she claimed. "Are we going to lose everything now? Our wealth came from this, Vic!" She could feel the nagging fear dousing her. "I won't ever let everything disapper like a bubble!"


In Moral Politics in the Philippines: Inequality, Democracy and the Urban Poor (Ateneo de Manila University Press, 2019), Professor Kusaka Wataru argued that right and wrong is a fluid concept from the perspective of the urban poor whose struggles in society were ever contextualized by marginalization and defeat.

In the mass sphere, livelihood and dignity are regarded as values that transcend the law. In other words, squatting and street vending are essential to one's livelihood, and hence morally justified, even if they are illegal.


Kusaka's analysis was applied in the contemporary times and the immediate past, and also with regard to the plight of the urban poor. However, the fictional plight of Nyora Tentay the usurer and land-grabber in 1970s Manila was already a novelistic symptom of Kusaka's "moral politics" that prevailed in the city as a result of moral fissures created by social inequalities. The survival of the fittest, dog-eat-dog culture subverts our traditional conception of rights and justice. Kusaka's argument was of course more nuanced and subtle than Arceo's black and white depiction of right and wrong.

That Caridad's land was now adjacent to a festering canal was a very obvious symbol of moral degradation and despoiling of values in a society wracked by poverty and inequities, the society that gave rise to Martial Law, its discontents, and its abuses. This symbolism was reminiscent of a similar estero in Rosario de Guzman Lingat's story. Tentay's villainy in turn was reminiscent of the opaque evilness of the mother in Austregelina Espina-Moore's novella Mila's Mother.

While Caridad sought redress for wrongdoing through legal means, the novelist intervened and decided to let Nature have her say. Arceo's default application of natural justice, of an act of God, to right the wrong, might feel like an evasion. The raging storm and flood that swept Nyora's house and devastate the whole community might as well be the dose of harsh reality to awaken the numb moral fiber of a society sleeping in the midst of human rights abuses during the Marcos dictatorship.

But the choice is the novelist's and her choice might be construed as inspired given the context of the need to cleanse the world of evildoing, to punish with the might of heaven. This was a not-so-subtle reminder that novelists could dispense justice and dramatize redemption transparently, sacrificing complex characterization in favor of didactic denouement.