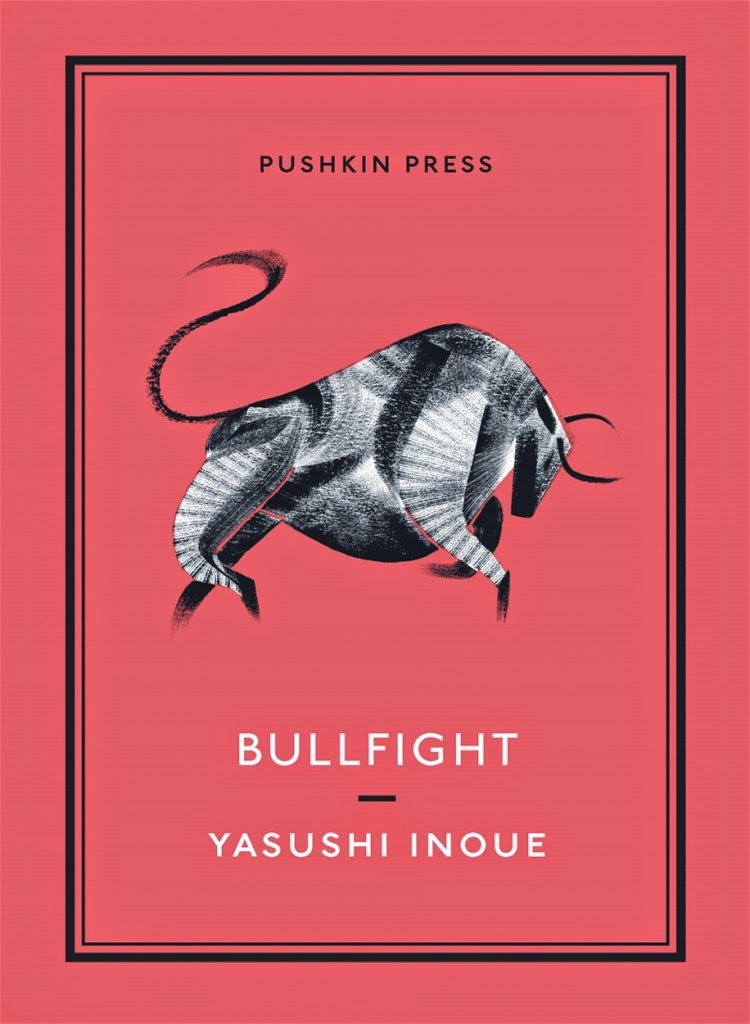 Prior to the bullfights that culminated this Japanese story, Mr. Tsugami, the bold editor-in-chief of the Osaka New Evening Post who risked to organized the event together with a gambling showman Tashiro, hosted a pre-tournament dinner for the owners of the bulls and his reporters. During the feast, he and his guests "found themselves witnessing a startling scene":

The owner of one of the bulls regarded as an obvious contender for first place, a woman named Mitani Hana, suddenly started shouting hysterically, kicked over her tray, and got up from her seat. She was a plump woman whose clothes revealed a certain flair that was hardly typical of a forty-something housewife from a small farm.

"As if I'd drink from a cup you filled, Mr. Kawasaki—you of all people! I've put my life on the line for this! Right about now my old man and the kids are dumping cold water over themselves back home, purifying themselves and praying that we win!"

Her expression was pleasantly taut, her face slightly flushed from two or three cups of sake; she leaned unsteadily against one of the sliding, paper-paneled walls as she yelled, her gaze roaming over the faces in the room. She was not drunk. The fierce intensity of her desire to see her bull win had stretched her nerves to the limit, pushing her into a state resembling temporary insanity. The Kawasaki bull stood right up there with the Mitani bull as a potential winner, and when that other bull's owner had filled her cup she had been unable to suppress the gush of antagonism that welled up within her, all the stronger because she was a woman and he was a man.


The fierce competitiveness overtly displayed by the Mitani woman was emblematic of the Japanese competitiveness that characterized the country in the years leading to the second world war. (This competitiveness was also present in Kawabata Yasunari's The Master of Go.) The setting of Inoue Yasushi's 1949 Akutagawa Prize-winning story was postwar Osaka where the residue of violence and combat still hangs in the air, albeit in the form of ruins and destruction. An altogether different set of social norms was in place. The former middle class used to luxury items had almost  been decimated; they would now be buying third-tier seat tickets in the bullring. Ringside seats would now be taken over by the “new salaried class.” As one character saw it: “Times had changed utterly since the war ended.” There was not a hint of irony in his statement.

In these postwar days, perhaps this was just the sort of thing the Japanese needed if they were going to keep struggling through their lives. Set up some random event for people to bet on, and everything would take care of itself: they would come and place their bets. Just imagine it—tens of thousands of spectators betting on a bullfight in a stadium hemmed in on every side by the ruined city…. In times like these, bull sumo was as much as people could manage.


Bull sumo or bullfighting. Just imagine it. A distraction for a people still hurting from their defeat in the war. Any story could easily take advantage of the economic realities and psychological downturn of a ruined city. Bullfight was a portrait of a society picking up the remaining pieces of lives scarred by firebombings. The reality of war hovered in every scene, haunting the air like a bad hangover. The city was charred in places. The inhabitants were in low spirit. The war was over. Japan had finally embraced pacifism. It may finally be an opportune time for some hard-earned entertainment.

The better part of Inoue's story described the logistical difficulties and the bureaucratic wranglings as Tashiro, Tsugami, and his assistants tried to hurdle many setbacks in putting up an ambitious, expensive three-day bull sumo event for the people to shell out money for. What seemed at first a straightforward preparation for a straight entertainment for the masses became an enterprise more and more quixotic as everything seemed to conspire against Tsugami and Tashiro's project. Tsugami already had an inkling of the economic risks; his pride and ambitiousness were tested as unforeseen problems cropped up at the last minute. His team had to skillfully negotiate with various stakeholders, including some shady and ruthless characters, to see the bull sumo project through. In requesting permission to hold a fireworks display, for example, postwar circumstances again made the request likely to be denied:

The town authorities were hesitant because this would be the first aerial firework display since the end of the war, and of course rules governing the use of gunpowder were very strict; they would do what they could to help, but they couldn’t say for certain that permission would be granted as a matter of course.


The wartime setting of story and the quick character sketches made for a fascinating combo. The bullfight was launching pad for Inoue's exploration of Japanese attitudes after the war. Tsugami himself was a man of complexity, tinged by an “unsavory side” according to his lover Sakiko with whom he shared an unstable relationship. He had a cold, icy character, reminiscent in some ways of the character of Shimamura in Kawabata Yasunari’s Snow Country. Tsugami's relationship with Sakiko was a reflection of the lead characters in Kawabata's impassioned novel. But where Shimamura was presented as nothing more than a cold aesthete, Tsugami was cold-blooded and calculating. Tsugami and Sakiko's love affair was on the rocks; they could either make or break it, depending on the outcome of their "mental fighting" which could be as decisive as two bulls locking horns together.

The translator Michael Emmerich was able to convey Inoue's crisp descriptions of characters. To stitch together Inoue's efficient prose, he often maximized the power of semicolon, a punctuation that does not waste a stray conjunction.

The creases in his pants were invariably crisp; he was nimble both in his interactions with visitors and in the manner in which he disposed of his work, and sharp to the extent that he sometimes came across as unfeeling…. They said he was loose with money, or smug, or an egoist, or a stylist, or a literature boy, and to an extent the criticisms they leveled at him hit the mark; but these very faults lent him an intellectual air that set him apart from most city news reporters.


Inoue managed to pack a lot of human observations in this elegant novella. The bull sumo was almost a side event in his exploration of the ethical aspect of human transactions; the lead up to main event was almost an excuse to investigate human profiteering and shady deals of businessmen. The novelist shrewdly introduced extreme situations to generate the responses he want from his characters.

“I have an urgent need for three hundred and sixty liters each of rice, barley, and sake.”

The quantities Tsugami named were much larger than was necessary. He was using this request as a way to plumb the depths of Okabe’s personality, his badness or his goodness—to take the measure of this man who, though this was only their second meeting, he had already discovered was peculiarly difficult to figure out. Tsugami was curious to see how Okabe would respond.”


Tsugami's opportunism in this instance was the same as the novelist's. Inoue plumbed the depths of his characters’ personalities, their quirks and weaknesses. He tried to figure out how they would respond considering the possible consequences of their decisions, the risky choices they made. It was what made Bullfight a beautiful, nuanced, often intense observation of human nature.


A selection for the Japanese Literature Challenge 8, hosted by dolce bellezza. My copy of the book courtesy of Lines from the Horizon and Pushkin Press.