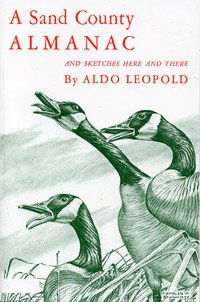 A thing is right when it tends to preserve the integrity, stability, and beauty of the biotic community. It is wrong when it tends otherwise.

So simple and so direct that one is struck by how obvious the above statements are, and yet these words seem like a newly discovered insight, especially as they come logically after a series of vivid expositions on nature and natural history. Nature is beautiful and if we preserve it, we truly deserve it. If we destroy it, we are killjoys. Simple as that.

A foundational text on environmental ethics, A Sand County Almanac by Aldo Leopold is a master statement of one who has spent a lifetime of thinking in terms of nature and who has meditated on the imperiled future of wildlife. Leopold's long experience in the subject made him a credible person to tackle the impending environmental crisis that resulted under the 'care' of man.

In the book, Leopold has presented a sound case for the protection of wilderness areas and the flora and fauna inhabiting them. Leopold’s philosophical ideas outlined and prefigured the major ecological strategies of nature tourism, economic valuation of environmental resources, wildlife conservation, biodiversity management, and environmental education. It is the latter that Leopold emphasizes as education (and research) is just the thing that can transform the old thinking of the use of natural resource base (utilitarianism) into a modern and progressive thinking of harmony between man and nature (co-existence). The book is a clamor for an intellectual revolution in ecology, its intelligence is deep and comes from a heart and mind so attuned to the daily cycles of birth, growth, vigor, death, reminiscence, and rebirth in nature.

The poetic language is actually a foil for the deep-set values that Leopold has harboured while staying in the Sand County. He builds up his hermetic ideas into an exposition of an environmental worldview starting from a monthly calendar of natural cycles of plant and animal journeys, to some of the best sketches of nature writing ever put on a canvas, and concluding with an ethical sequence which unfolds like a jamming session of a philosopher in the underbrush of trees.

During every week from April to September there are, on the average, ten wild plants coming into first bloom. In June as many as a dozen species may burst their buds on a single day. No man can heed all of these anniversaries; no man can ignore all of them. He who steps unseeing on May dandelions may be hauled up short by August ragweed pollen; he who ignores the ruddy haze of April elms may skid his car on the fallen corollas of June catalpas. Tell me of what plant-birthday a man takes notice, and I shall tell you a good deal about his vocation, his hobbies, his hay fever, and the general level of his ecological education.

This of course is a challenge from a proud man, and one can take it up without regret. Reading the prose is in itself a discovery of plant-birthdays when the natural curiosity suddenly flowered, took flight, and aspired for a higher education.

A very fine sensibility to and perception of the natural world, Leopold’s writing is filtered through a powerful lens of human-ecological experience and consciousness. There is a slow internal rhythm to the first two parts of the book (“A Sand County Almanac” and “Sketches Here and There”), but immediacy and freshness lend itself to some of the best passages of nature literature ever written. The prose poetry that alights on the essays here is simply awe-inducing.

The middle part is an on the road, freestyle riffs on some of the memorable but fast disappearing wild places in . Each place is unique for some reason, but really each place is the same. They are all found in one and the same location because they spring from the same idea of something good, something transient, and something we encounter with, even if only once in a lifetime, authentic and humbling gladness. They are “here and there”, all around us, and they are waiting for us. We need to commit them to memory, to record them indelibly, and to believe that they can be lived again.

The final section, "The Upshot", is a cogent argumentation for environmentalism that is not tainted by the usual gloom-and-doom rhetoric. It contains Leopold's aphorisms and dictums on what consists of right and wrong when it comes to human-environment nexus. The “Land Ethic” essay in this last section had been anthologized many times over in scores of books on environmental ethics. I think I own two or three other books where this essay was reprinted.

It is a further achievement of the book that it is able to integrate the principles and concepts of ecology, then a pioneering science, into a style of writing that will be appreciated even by a layman. I recommend this book (actually, shoving it) to nature lovers and naturalists, but really, to general readers who want to escape the inertia of urban living and retreat into the folds of wilderness.


(I had three copies of the book. One is a reprint of the original edition first published in 1949. Its cover is the one pictured here. My second copy is a special commemorative edition for the 100th anniversary of Leopold’s birth. This edition contains an introduction by Robert Finch. I got both copies from BookMooch. I found my third copy in a used book shop, a mass market paperback edition with additional essays and sketches. My first and third copies were given away in BookMooch also. But the edition I'm craving for is a recent illustrated hardcover.)