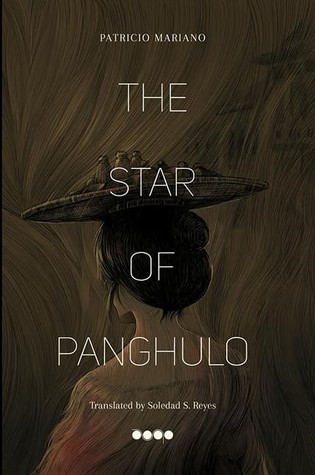 The Star of Panghulo, the translation of a 1913 novel by Patricio Mariano (1877-1935), was not the best book I read this year. It was a minor novel, but it certainly graced the best book cover I encountered this year. For a synopsis of the novel, I don't think I could improve upon what's in the Wikipedia page of the novel. It's a tale of contrasts: two women, two men, two love affairs.

Here we have Soledad S. Reyes doing the translation once again. This was her sixth translated novel from the Philippines since Macario Pineda's The Gold in Makiling in 2012, making her the record holder for the most prolific novel translator in the country.

I could not fault Soledad S. Reyes for which author she translates next. Other than her curation of Rosario de Guzman Lingat's novels and stories, the rest of the writers she translated were male. She seemed to be interested in how Filipino male writers of the first half of the 20th century portrayed women in their fiction. Hence, the novel (and several stories) of Macario Pineda, and then The Golden Dagger by Antonio G. Sempio, and then this novel. The latter two novels were hardly radical in their approach to the novel.

It would have been ideal if Reyes translated the works of better Tagalog novelists instead. For example, other novels by Macario Pineda, or those of Lázaro Francisco. Better yet, she could always select for her translation project the works of other women writers themselves. And why not take a look at the works of some excellent contemporary writers? I could not fault the translator for her chosen project, but how I wish she took some risks.

In any case, the novel in question, set in 1872, provided ample details about life in rural areas in the vicinity of Manila. The translator likely captured the cadence and richness of the Tagalog language in those days.

—Oh, what a terrible fate befalls a poor man,—Pedro interjected, appearing to mumble the words to himself. —Had I been a man of means, your father's violent objection to our love would not have reared its ugly head; and perhaps your parent would not have vilified my honor because of their desire to acquire tons of silver in exchange for your beauty ...

Since the quality of Tagalog as language had evolved between 1913 and 2018, Reyes was attuned to the register of the old Tagalog which must have proved to be slippery when it comes to rendering it in the English. The translator's project was clearly aimed at characterizing portrayal of women in a society steeped in patriarchy, class conflicts, and tradition. It was an era that idealized beauty of the fair sex.

Lucia was like the flower called alexandria, newly sprung in bloom; a flower grown in the country, a Filipina in whose veins flowed Spanish blood because one of her ancestors was the son of a Spaniard; Berta was the bud of sampagita, a flower native to the country, the flower inducing passion among the modest, delicate hearts of the Filipino race, the flower that embodied the love of the best of Filipino womanhood.

The sentimental mannerisms and romantic notions were here in abundance. It idealized Berta, the "star of Panghulo", not only for her beauty but for her compassion and devotion for the poor. In spite of her poverty, "no one would dare mock or cast aspersion upon her, terrified as these potential character assassins were of the barrio folk's collective revenge". The barrio folk had put Berta on the pedestal for her hard work and charity for the poor.

In contrast to the meek and kind Berta, Lucia was portrayed as a liberal woman who was in a lonely relationship with an abusive husband. In those days, the woman's code was to endure being with her husband no matter what. Both Lucia and Berta were subject to the "traditional values" of self-abnegation, how women should behave in order to retain her honor. Lucia for not breaking up with her husband, Berta for not openly declaring her love for a man lest she be labeled as a loose woman.

—Please forgive me, my love,—Pedro said, after I had regained my consciousness. —Forgive me if, because of the deep emotional wound caused by your refusal to say anything yesterday to convince me of your love, I have caused this upheaval. I know the gravity of my sin, that is why I am laying my heart bare, this heart that has caused untold misery; slash it, for each drop of tear flowing from your eyes is my life itself. Here is my treacherous heart. Drain each ounce of its blood to wreak vengeance and so drive away some of your bitterness ...

The syrupy dialogues in the story would probably constitute its greatest novelty. While definitely a flawed novel through and through, The Star of Panghulo was a historical product of the times. At times the narrator displayed some playful, modernist tendencies, at times the characters proclaimed some feminist ideas, but always the narrative was true to the stereotypical conception of women, the premium given to traditional mores, and the abiding patriarchy that shaped human relationships in the novel's time period.