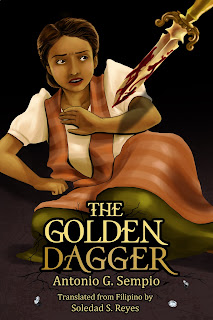 In her Bibliography of Filipino Novels: 1901-2000 (2010), Patricia May B. Jurilla noted that the most prolific novelist in Tagalog was Antonio G. Sempio (1891-1943) for having the most number of published novels in book form. Most novels in Tagalog/Filipino were first serialized in magazines or newspapers before being published in book form.

Between 1917 and 1942, Sempio produced 19 novels, including a translation. According to Jurilla, it was likely that most of these novels were self-published owing to the fact that Sempio was known for peddling his books as he traveled from town to town.

One such novel—Ang Punyal na Ginto (Nobelang Tagalog) (1933)—recently appeared in English translation by Soledad S. Reyes as The Golden Dagger. This novel was notable for being the basis of the first ever "talking" film in the country. In a way, this was the story which finally broke the "silence" of the silver screen.

According to Jessie B. Garcia in A Movie Album Quizbook (2005), cited by Video 48 blog (link), the exhibition of Punyal na Ginto the movie at the Lyric Theater on the Escolta "was made possible with the importation of American technicians and sound camera equipment by two American businessmen and promoters, George F. Harris and Stewart “Eddie” Tait of the Tait Shows carnival fame."


The plot of The Golden Dagger was a melodramatic and rather tragic treatment of the love between the poor girl Dalisay and the filthy rich boy Dante, with the boy's father, the despotic Don Sergio, doing everything in his power to thwart the affair. In the translator's introduction, Reyes cautioned the reader to look at the novel "against a specific sociopolitical context and an evolving literary tradition", for the reader to "retrieve the novel's original meaning on its own terms". Without the context to situate the novel in the American colonial period fraught with inequalities between the landed rich and the working poor, the novel would be easily dismissed as poverty porn.

The names of the characters were rich in meaning. Dalisay is the Tagalog word for pure and untarnished, and it was her destiny to erase the stain that marked her ill-fated association with Don Sergio and his son. Dante Villa Centeno was the only major character given a full name in the story. It was as if only the rich were the only ones entitled to a full name. Elias, Dalisay's cousin and the third corner of the love triangle, seemed to echo the noble character of Elias in Rizal's Noli Me Tangere. By the end of the book, Elias became like Simoun the jeweler in El Filibusterismo by being rich himself, and like Isagani by derailing Dalisay's plan of revenge. Elias then had the nobility of his namesake, the wealth of Simoun, and the righteousness of Isagani.

The tragic conclusion of the story was foretold in the beginning. What was left to ponder in the novel? The sentimental drama and the momentous, heart-stopping twists and turns; the Philippine sociopolitical background that informed such a story; the ingenious use of the reference code; the narrator's frequent intrusions, his ironic commentaries to the story, and his constant taunting of the reader at the end of the chapters; the verbal and psychological battle of wills between the rich boy and his father, and between the poor girl and the rich boy's father; time lapse and transformations of character. Somehow, too, the corrupt stench of patronage politics and partisanship of the 1930s pre-Commonwealth period still assaulted the nose of the present.

—Oh, no! I'm here to pay you a visit. I'd like to find out what you need and what you think. What can I do for you, friends?

—Ah, if that's what you want to know, there's a whole list—Mang Bastian replied. —First of all, there is only one artesian well that the democrats built at one end of the village nearest the street where their party mates lived; this is not enough. Secondly, the number of students is growing, but since the only public school is small, the students are forced to stop schooling because the school in the town proper is inaccessible.

—But what are your mayor, representative, and senator doing? Why don't you ask them for help?

—Naku! Those officials say they have the people's welfare in mind, that is, when campaigning, but the moment they are elected, they conveniently forget their promises!

—Let me handle this and I'll look into these needs and follow up on them until they reach the office of the Governor-General. We're friends, and I promise to facilitate what your elected officials fail to deliver! [...] But of course they will not dare disappoint me! Do you think the amount of money I donate to their campaigns during election is a pittance? They all entwine themselves around me! Start with Quezon, to the oldest senator, and the representatives, and you may add the secretaries of the various departments. Not one of them can afford to turn me down! They owe me a great deal, and they will not have the nerve to refuse me! Ah! Even the Governor-General has not failed me, not even once!


The proud speaker was Don Sergio, and his certainty of victory spelled the doom not only for the political trajectory of the country but for Dalisay's unwinnable love for Dante.

Don Sergio's "golden dagger" (a transparent metaphor for the unlimited power and resources available to the rich) was poised and ready to fight against Dalisay and her love for Dante. The golden dagger was designed for the systematic terrorizing and breaking down of poor folk who dare cross the path of the ruthless rich.

How would he make the young woman [Dalisay] withdraw her promise? How, ah, how? What if he offered untold riches? He was willing to pay her off since Dante's money was the sole motive driving both mother and daughter [Dalisay and her mother]. He would offer thousands of pesos, or however much it would take, to free his son's ensnared heart. Once she agreed, then there was no more need to talk. Just allow Dalisay to name her price, and he would pay her with alacrity, with a smug smile on his face. But if Dalisay remained firm despite her gentle pleading, he would unleash the terror—he would berate her, threaten her, and put the fear of the Lord in her. If she did not succumb to his entreaties, then he would resort to violence. Nobody who defied him was spared his deadly revenge. This scheme, this one plot was the only alternative that would probably lead to satisfactory results!


The rich were results-oriented, once they put into motion their best-laid plans. Using Plans A to C and other cruel contingencies, their quarry would not be able to escape.

After another round of furious exchange, the police van finally arrived. How could they afford to ignore the master's order? The chief of police was a friend of Don Sergio's, and sending a van over with alacrity was the least he could do.


With the whole political establishment at his side—the so-called "duty-bearers": legislators, judges and lawyers, the police force, the Governor-General!—it was no wonder that Don Sergio would not have the least trouble perpetrating his evil design on Dalisay. The "rights-holder"—the poor, the marginalized, the disenfranchised—would be easily robbed of their rights and freedoms. For her part, Dalisay—even before Miss Saigon—would be forced to perform the ultimate sacrifice. And even if it killed her trying, she would have her revenge, one way or another.

The Golden Dagger was one of the last publications of the De La Salle University (DLSU) Publishing House. According to a major online local bookseller I talked to, the press was no longer in operation. This was a tragedy, not least because the DLSU university press was one of a handful of progressive publishers of translated novels in the Philippines. In 2013, the press released, also in translation by Soledad S. Reyes, two remarkable novels by Rosario de Guzman Lingat.

I am not sure if the movie adaptation is still extant. If it is, I hope I will have the chance to watch this first ever Tagalog movie recorded with sound.