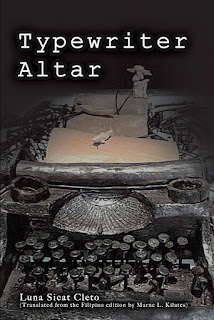 No matter how one approaches Luna Sicat Cleto's first novel, Makinilyang Altar (2002), the default reading of it as biographical and autobiographical would certainly be the one to generate a lot of meanings and ideas. Its writing was a form of confessional and, at times, even of exorcism. Rogelio Sicat (1940-1997), Cleto's father, author of the novel Dugo sa Bukang-Liwayway (Blood Spilled at Dawn) among many other writings, was the driver of the novel. In her preface to Marne L. Kilates's translation from the Filipino edition, the novelist admitted that "witnessing my father's passion to write was a painful experience, and writing about that pain was a mirroring exercise that could literally wound you with shards of broken glass." A wounding reading experience this novel certainly was, but it was almost a religious form of wounding, where the muse of creativity and inspiration was ever sought like a bashful deity to be worshiped at the altar of literature.

The novel began self-reflexively, with a lyrical dream and with writer's block.


Here was Laya Dimasupil, a writer tentatively testing the waters of literary creation, clearing the blank pages for whatever forms of expression would manifest themselves into words, sentences, passages, and chapters. She resolved to tell her journey into literature and "sing the elegy of the altar of the typewriter."

The typewriter generation of Laya's father was now anachronistic. Sometimes I think of those writers as the last literary craftsmen, the ones who first carefully weighed the words, completed their thoughts in their minds, before typing their sweat and blood. No delete and backspace for them. No tentative steps but an already instantaneous finality marking the words on paper. Laya's father, Deo Dimasupil, was a domineering father and writer to reckon with. He could not stand the noise of his children that would perforce stand in the way of his writing his masterpieces. A former activist, Deo was the quintessential revolutionary writer and professor in a state university, always combative and opinionated. The materials of his principled art were the proletarian struggle for equity and equality. He was the writer of the people, the writer who tasted poverty and hard work first hand and who was eternally frustrated by university politics and false righteousness and posturings among revolutionaries and rebels. Deo could never reconcile the (for him) hypocritical lifestyle of national leaders and supposedly creative class of writers with their (lip service) literary cause and vocation. His convictions were always eroded by the realization that the world was an unfair playing field.

Amid her father's frustrations, bitterness, and cynicism, Laya's literary consciousness slowly developed. Though her father had his fair share of quirks and impatience, hers was not a dysfunctional family although her childhood was not entirely lacking in neighborhood and domestic conflicts (from relatives outside the nuclear family). Her family experiences certainly marked her for life and shaped her critical and practical worldview. The discrete units of memory (hers, Deo's, her mother Gloria's) disrupted and invaded the flow of Laya's narrative. The reliance on unreliable memory was a novel device to get at the crux, at the essence or substance or point, of a writing life.

When will he write these memories into a novel? How will he draw out from his life the right words, and the words into a novel that would respond to these times? The blank page from his notebook stared at him waiting for his pen.


Like Edgar Calabia Samar's first novel, Eight Muses of the Fall (2008), this turned out to be a modern exploration of the fount of creativity and the ways with which lived and remembered and imagined and dreamed experiences colonized the writer's blank pages to produce the first novel of the would-be novelist. Samar and Cleto's protagonists were equally possessed by (literary) demons. They had to get the first novel out of their system if only to make sense of the materials they excavated from their personal experience. They had to make a report of their spiritual sojourns into literature and to publish their findings.

The same impulse and literary sickness afflicted Cleto's accountant mother, Ellen Sicat, who at the age of 57 decided to write a novel after the death of her husband Rogelio Sicat. Interestingly, to begin the literary conversation with her daughter's novel, she also named her character Gloria in her two novels Paghuhunos (Molting) and Unang Ulan ng Mayo (First Raindrops of May).

But since this was after all an elegy, or more like a homage, to a father, the onset and progress of Deo's fatal disease finally exposed the festering grief and loss in the novel's center. For the mortal Deo, brought face to face with his impending demise, this existential crisis was the closest he would get to an imagined holocaust or auto-da-fé. For the impressionable Laya, the loss of a parent was harbinger not only of pain but of the loss of her moral compass. A subplot concerned Laya's unfaithfulness to her husband. An affair with a co-worker was presented like a temporary bout of lust and insanity, a sacrilegious offense to the typewriter altar, symbol not only of the altar of creative minds, but of the spiritual moorings and moral groundings of a person.

By the time the novel inhabited Gloria's memory in the final chapter of the book, we were already used at following the episodic mind of a creative writer. The relationship between reader and writer was already secured, in the same manner Gloria appreciated being the first reader (and reviewer) of Deo's writings and feeling "privileged" because of it.

And I knew where it started—my own voice had been looking for its own space. I wasn't a writer but he let me feel the fulfillment, the exhilaration whenever he finished a work. And I admit, it was a privilege. I could tell him what I thought of what he wrote.


Perhaps like Laya's growth as a writer based on her close observation of and fascination with her father's explosive temperament as a writer, the incremental cultivation of Gloria's literary consciousness had its beginnings with the daily observation of her husband's habits and a close reading of his writings. Tentative and unsure like her daughter at the beginning of the narrative, Gloria was awakening from a dream of letters.

Would she be able to write her own narrative, her own story? She didn't know where these musings would lead. But she knew she had material that she could write, that she wanted to express. She removed her name and began the narrative again by using the gender nouns "woman" or "man," and the children were simply their family rank: eldest, second, youngest. In erasing their names she was putting back the story she knew. She was not aware that she was now creating her own parable.


In the altar of memory and grief, the creative mind wanted to assuage its pain. What better way to find comfort than to follow the source spring of inspiration: to try one's hand at creative writing. Give in to the compulsion to write, inhabit fictive memories and fictional personalities, temper the point of view, hone the technique, discover subtlety.

Since the writing bug bit her she neglected to scrub the floors, forgot all about the curtains that had been hanging at the windows for, perhaps, three years now. When Gloria was writing, it was as if time stood still, everything was suspended. She had no morning, no noon, no night, so on that desk was parked a pink-lidded tray. Inside were some fruit. She'd peel a ponkan orange or a banana whenever she felt hungry.


Laya and Gloria emerged as keyboard novelists after breaking out of the oppressive shadow of the father and husband. The "writing bug" that inspired them to tell stories proved to be a legacy just as lasting as the stories Deo Dimasupil typed in his typewriter, at nights when Laya and her sister would sleep outside their only room in the house so that Deo in deep concentration in his sacred altar would never be disturbed.

Typewriter Altar is part of the short reading list of Filipino women novelists in translation.