A Roomful of Machines

A Roomful of Machines by Kristine Ong Muslim (ELJ Publications, 2015) 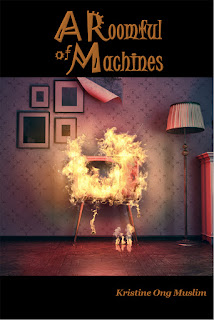 One only asks of a poet to be continually surprising and for her metaphors to be engaging and rad. Metaphors are fragile constructions. They weave together disparate things, and they easily break. How to make a single unit things that together sit unusually?

Like half a piece of July
on a girl’s barrette.
Would have bent double
in the drawer when whisked
with the other outcasts, the ones
assuming a distinct
shape and configuration
when used accordingly.
Could be a fortune told
by the lines of woven cotton.
Could be a crescent moon
or a miniature sphinx.
Could be a forced smile.


Socks and moon, socks and sphinx, socks and a smile. There is no end to socks comparisons. Ultimately, the wearer has to declare the fit and snug. The poet has to make a point even if, just like a forced smile, she seems to have forced her metaphor. The enigma of socks lies in the weaving.

It’s only a reconstruction, the curator insists.
I do not believe him. I know that

the reptilian bird waits—the predatory
posture intact through the years.

And it will raze again. For now, it quiets
down, stays close to the ground where

the weak ones scuttle past. The glass box
only keeps its hunger, keeps it small.


In a natural history museum, the visitor gazes at a small specimen encased in glass. For him it is the real monster awaiting its time, ready to pounce on the "weak ones". The restoration of an ancient bird accepted as the bird itself, there is no higher praise for the "taxidermist".

I have missed this: the upturned trough
where the white chickens bend down

to drink. All the mythical elements
blend at some point. Art books sum it up

with the laws of perspective. The red
wheelbarrow is smeared with cow dung.

It is drought season, and the cows
graze what is left of the grass.


So much depends upon a recreated poem, glazed with an inverted season (drought vs rain water), and filled with new details (trough, cow dung, cows, grass). In retrospect, this is not deconstruction but homage. This is still life. Art books sum it up: The blending of the elements is a matter of perspective. Another example of this blending: the way the evidence collected from a "crime scene" speaks loud.

A leaf with a portion of a boot imprint,
a hammer, a chipped coffee cup,

a rusted knife, a glass shard—
tell us your story, teach us how

a wreckage calls out
to its survivors.


This is the general tendency of the poet—to speak after the fact, after an accident or crime or tragedy. We know something tragic or unforgivable happened because the lines of poetry had to call out to its subject to tell the whole story: a wreckage calling out to survivors to bear witness. As in the opening of "From Scratch": "There is no way / to stop me from / confessing to murder / in poetry." The images are silent with something inherently violent in them.

... The doors
of houses are flung wide open—
the throats of two hundred
ventriloquists stitched end to end.

from A family room that doubles as camouflage

Underneath the glass, the deathless
butterflies are pinned in place.
Death has not altered their symmetry.


The art of Kristine Ong Muslim's poetry borrows from the art of the detective story, with the right amount of guilt and paranoia. Hers is a performative act—the very act of deciphering in poetry. It is to her credit that her lines are devoid of self-consciousness and self-absorption.

Hers is the sometimes violent act of deconstruction and reenactment of sordid images and crimes. As in the poem "Blasphemy" where the lines began with the ending so that the entire poem loops back on itself and intimates the vicious cycle of violence. Perhaps what encapsulates Kristine Ong Muslim's general feel for metaphor is the doctor's diagnosis, in "P is for Phyllis", of what appears to be the ailment of a mental patient.

It’s your fear of the ordinary
that brings out the strangest of things.


It's not all violence and the aftermath of a murderous rampage though. She is so great and versatile, sometimes she reminds me, in her plainspokenness and matter-of-factness, of Wisława Szymborska, as in "Soul".

It slouches or stretches
to resemble me
down to the tiny mole
at the back of my left hand.

It has the invisibility
of a polite guest,
the will of an intruder,
the dreams of a child.

Barefoot, it glides
and hides behind the vase.
It waits for years
to catch me empty-handed.


I read the second edition of A Roomful of Machines. The first edition was published in 2010 in the UK. My copy of the book is courtesy of the author.

Email ThisBlogThis!Share to TwitterShare to FacebookShare to Pinterest
Labels: A Roomful of Machines, Kristine Ong Muslim