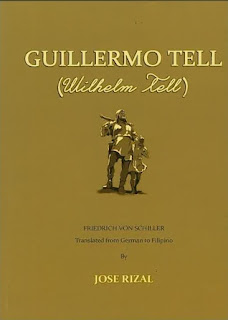 Can a Swiss (European) national epic about a revolution inspire another revolution halfway round the world? Maybe it could. But it should be translated first.

Friedrich Schiller (1759-1805) supplied the prefatory lines to José Rizal's (1861-1896) Spanish novel of revolution Noli Me Tangere (Touch Me Not). They are taken from the parody poem "Shakespeare's Ghost". The German original of the extract from the poem appeared on the left; the Spanish translation was on the right.

"What? Does no Caesar, does no Achilles appear on your stage now?
Not an Andromache e'en, not an Orestes, my friend?"
"No! There is naught to be seen there but parsons, and syndics of commerce,
Secretaries perchance, ensigns, and majors of horse."
"But, my good friend, pray tell me, what can such people e'er meet with
That can be truly called great?—what that is great can they do?"


Rizal translated Schiller's final play on 1886, a year before Noli Me Tangere was published in Berlin. Hence, it came to be that the first great Philippine novel was written in Spanish, printed abroad, and partly influenced by a Swiss dramatist. Rizal was a polymath of languages. From German, he translated Wilhelm Tell into Tagalog. The recent version printed by the National Historical Commission modernized Rizal's Tagalog into contemporary Filipino.

The translation was published in the Philippines posthumously, in 1907 and 1908, almost a decade after Rizal was executed by Spanish authorities for sedition. Schiller's revolutionary thinking influenced Rizal's thought and the writing of his twin magnum opus, Noli Me Tangere and its sequel El Filibusterismo (Subversion).

Like Schiller, Rizal depicted a nation in chaos and under the grip of terror from imperialistic and militaristic powers of the state. The empire and its cohorts were terrorizing the land, seeking to control the populace and enrich themselves by land grabbing and stealing other people's properties. The people were incensed by the endless malevolence and abuse of authorities, by their lack of freedom, the unjust social conditions. From apathy, they were awakened toward resistance, toward social organization, and toward the use of force. Blood accompanied their revolt.

Rizal learned from Schiller how to dramatize the fight for freedom, for independence, and self-determination. Revolution against prevailing authorities was ever justified if their representatives ("parsons, and syndics of commerce,/Secretaries perchance, ensigns, and majors of horse") use their power perversely to thwart natural and divine laws, the laws that protect human rights and basic good. In the most famous and very effective scene of the play, Guillermo Tell was told by one of the emperor's men to shoot with an arrow the apple placed on top of his own son. Who could blame Tell, who at first seemed reluctant to join the brewing revolution against the empire, if after a first-hand taste of an unjust attempt to kill his own child (by his own hands!), he decided to stamp out the enemy?

Throughout history, subjugated peoples reached saturation points, enabling them to unite and band together and to act decisively against totalitarian rulers who eventually suffered the fate of their folly. Accompanying such wars and revolutions was the emergence of nationalism and a new world order. The resistance in Schiller's drama came from people of all classes, from the working classes (fishers, shepherds, hunters, farmers) to the bourgeoisie (rich landowners, barons, heirs). In Rizal's time and in his fiction, the rebels were a mix of the workers and commons with the landed class and the ilustrados (educated elite); in Noli: the disinherited Elias and the disenfranchised Juan Crisostomo Ibarra, the novel's idealistic protagonist who will later metamorphosed into the vengeful figure of Simoun due to the abuses he suffered from Spanish clerics and authorities.

It was possible Rizal borrowed lines and ideas on radicalism from Schiller in a climactic encounter in Noli where Elias had a conversation with Ibarra. This scene was a turning point for the novel for this is when Ibarra had an epiphany, the "eye-opening" scene where he admitted his previous error in sympathizing with the authorities. Ibarra's lament might as well be a synopsis of Tell's revolutionary awakening.

“You’re right, Elias, but man is a creature of circumstances! Then I was blind, annoyed—what did I know? Now misfortune has torn the bandage from my eyes; the solitude and misery of my prison have taught me; now I see the horrible cancer which feeds upon this society, which clutches its flesh, and which demands a violent rooting out. They have opened my eyes, they have made me see the sore, and they force me to be a criminal! Since they wish it, I will be a filibuster, a real filibuster, I mean. I will call together all the unfortunates, all who feel a heart beat in their breasts, all those who were sending you to me. No, I will not be a criminal, never is he such who fights for his native land, but quite the reverse! We, during three centuries, have extended them our hands, we have asked love of them, we have yearned to call them brothers, and how do they answer us? With insults and jests, denying us even the chance character of human beings. There is no God, there is no hope, there is no humanity; there is nothing but the right of might!” Ibarra was nervous, his whole body trembled.

[The Social Cancer (1912), tr. Charles Derbyshire, emphases are mine] 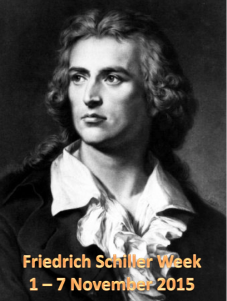 The debate on the use of violence to fight for what is right is at the center of Schiller's drama. In Schiller, the image of a blindfolded man suddenly seeing very clearly was present in the (trembling) words of Rudenz, an erring nephew of a baron who formerly sympathized with an abusive judge from Austria.

My people I forsook—renounced my kindred—
Broke all the ties of nature, that I might
Attach myself to you. I madly thought
That I should best advance the general weal
By adding sinews to the Emperor's power.
The scales have fallen from mine eyes—I see
The fearful precipice on which I stand.
You've led my youthful judgment far astray,—
Deceived my honest heart. With best intent,
I had well-nigh achiev'd my country's ruin.


The trajectory of the apple (and the arrow) follows the Newtonian laws of physics, but to deny laws governing "the chance character of human beings" is to tempt fate and to test the patience of man. "Papanain sa ibabaw ng ulo ng anak! Kailan ma'y walang nakitang katulad na utos sa isang ama!", exclaimed a fisherman who learned of the scene with Tell and his son.

To level at the head of his own child!
Never had father such command before.
And shall not Nature, rising in wild wrath,
Revolt against the deed? I should not marvel,
Though to the lake these rocks should bow their heads,
Though yonder pinnacles, yon towers of ice,
That, since creation's dawn, have known no thaw,
Should, from their lofty summits, melt away,—
Though yonder mountains, yon primeval cliffs,
Should topple down, and a new deluge whelm
Beneath its waves all living men's abodes!


The act was not only against divine law (ungodly), but also against logic (unreasonable); not only against human nature (inhuman), but against nature itself (unnatural): "And shall not Nature, rising in wild wrath, / Revolt against the deed?" This was to overturn all sacred beliefs and to run counter against natural instincts. This was universal stuff and felt by many. The personal (interest) seems to be a major force to reckon with when it comes to the political (matters). 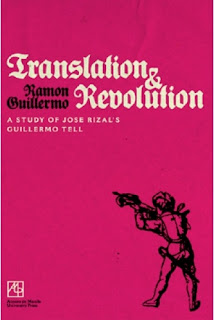 Tell is somehow one of the composites, a template, for the filibuster character of Simoun Ibarra in Rizal's El Filibusterismo. In Translation and Revolution (Ateneo de Manila University Press, 2009), Ramon Guillermo's book-length study of Rizal's translation of Schiller's play, Guillermo dissected Rizal's several word choices and exposed the nuances in the translator's grasp of the necessity for bloody revolution to quell slavery and to protect life, property, and family. I discovered reading Guillermo's book how the "modernized" version of Rizal's Guillermo Tell produced by the National Historical Commission of the Philippines may actually have done violence to the work by unduly renovating Rizal's Tagalog and paraphrasing too much his (old) Tagalog expressions which to me were still relatively understandable. An example was the famous passage quoted by Ramon Guillermo.

[modern Filipino version by the National Historical Commission of the Philippines (NHCP), based on Rizal's translation]

Yes! there's a limit to the despot's power!
When the oppress'd for justice looks in vain,
When his sore burden may no more be borne,
With fearless heart he makes appeal to Heaven,
And thence brings down his everlasting rights,
Which there abide, inalienably his,
And indestructible as are the stars.
Nature's primaeval state returns again,
Where man stands hostile to his fellow man;
And if all other means shall fail his need,
One last resource remains—his own good sword.
Our dearest treasures call to us for aid,
Against the oppressor's violence; we stand
For country, home, for wives, for children here!


The most obvious tinkering done by NHCP was to transform the poetry lines into prose format. The "modern" paraphrasing, furthermore, was arguably different in tone and content from Rizal's original version. It's a translation of a translation. I'm no longer sure if I'm actually reading Rizal's version!

Ramon Guillermo's study of Guillermo Tell provided a lot of background information and context into Rizal's creative process, his theory of translation, nationalism (c. 1890) and ideological background of the work. He used computer-aided discourse analysis, quite technical and academic and stiff in many parts but the insights he extracted were fascinating, based on the few pages I read and browsed.

Going back to the original question posed at the start of this post, it appears that Rizal was inspired enough by the revolutionary ideas of Wilhelm Tell to create his own revolution in his novels. Novels which inspired the outbreak of the 1896 Philippine Revolution against three centuries of Spanish rule in the Philippines. Novels that "survive" and "live on".*


I read this for Week 1 (Friedrich Schiller Week) of German Literature Month V, generously hosted once again by Caroline (of Beauty is a Sleeping Cat) and Lizzy (of Lizzy's Literary Life).


* In his concluding chapter to Translation and Revolution, Guillermo introduced the idea of translation as a lifeline.

At the beginning of Wilhelm Tell, Konrad Baumgarten is being pursued by soldiers for killing Count Wolfenschießen who had made indecent advances on his wife. He arrives running at the bank of the raging river and pleads with the reluctant boatman to bring him across the river to safety. Baumgarten exclaims:

Save me from sure death! Bring me across!


It can be observed here that the German verbs for "taking across" and "translating" has the same form: "übersetzen" (though the verb "übersetzen" which means "translation" is, strictly speaking, not separable into "über-" and "setzen"). This pure coincidence creates the possibility for playing on two possible meanings of "übersetzen." It could therefore be read as either as "Save me! Bring me across!" or as "Save me! Translate me!" Walter Benjamin's (1985) much cited philosophy of translation, in fact, looked upon translation as the means by which a literary work succeeds in "living on" (Fortleben), or "surviving" (Überleben). The translated work achieves this not by remaining simply as it was but by being transformed and renewed in translation. If Baumgarten's life was saved by Tell who had the courage to bring him across the raging river, the text of Wilhelm Tell could in turn be made to "live on" by being translated across other languages and cultures. Jose Rizal's Wilhelm Tell translation can therefore be considered as one example of this "living on", though it is actually one translation, which almost never made it across.