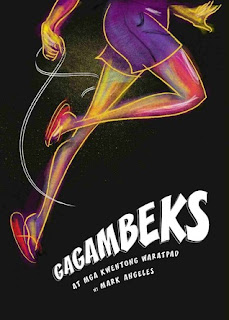 
Entertaining is the story of Angelo/Gelo aka Gagambeks, an orphan and a poor boy who grew up with his grandma in a shanty. Gagambeks is a combination of the words Gagamba (Spider) and beks (for beki, slang for gay), and a reference to a local television series Gagamboy (Spiderboy) and, dare I say, the Marvel hero. Gagambeks, hence, is the spunking new hero Spidergay. Waratpad is a play on the reading site Wattpad. Warat means torn or broken. Waratpad stories are stories going against the grain of local romance stories (chick lit, fan fiction) through thematic and linguistic play on love stories.

The novella started with our hero searching for his 'future boyfriend'. Poverty and hard luck forced him to work his ass off in a garments factory owned by a greedy merchant. In this factory Angelo became exposed to noxious chemicals and unjust workplace regulations. Angelo was branded Gagambeks because of his long, thin legs and effeminate behavior. His strength and beauty were tested when he was forced to fight in a mud wrestling/kickboxing event. From there, Gagambeks' advocacy to fight for the rights of the factory workers began when he started to make a speech against the factory owner's anti-worker policies. There was a big commotion, and then the lights blacked out. Suddenly Gagambeks was kidnapped by a hunky guy who looked like Enrique Gil. Angelo was not even sure the man was a villain or a sympathizer. Could he be the future boyfriend he was looking for all along?

Mark Angeles combined entertainment and a not-so-subtle proletarian message in a story couched in playful language and riotous plot. It's the kind of story relished by those who are not after serious, as in serious, works of fiction. For this was the territory of postmodernism. And the postmodern is perverse, to paraphrase J. Neil Garcia's cultural criticism in The Postcolonial Perverse. It is perverse because it does not take itself seriously though its message is just as heavy-handed. It punches the holes of conventional storytelling and reader expectations.

The writer's acknowledged novelistic influences were Ang Huling Dalagang Bukid at ang Authobiography na Mali (by Jun Cruz Reyes), Si Amapola sa 65 na Kabanata (Ricky Lee), and Lumbay ng Dila (Genevieve L. Asenjo). I could detect JCR's novel's influence in the effective integration of activism in a novel. But I don't know about Lee and Asenjo's books. I would love to read Lumbay ng Dila (Tongue's Loneliness), it's on the wish list, but I failed to finish reading the unconvincing pyrotechnics of Ricky Lee in Amapola.

Angeles brings sensitivity to his characterizations of the marginalized and the challenged persons in Gagambeks and in the rest of the stories. Onoda in "Samurai" was a great recreation of the actual Japanese soldier who hid in a Philippine island for decades and refused to surrender even after the war was already ended by an atomic bomb. Stories like "Mata-Mata" were not as successful because the juxtaposition of historical events with a contemporary violent crime seemed forced. Stories like "Casafuego" and "Lazarus" were notable for the successful application of magic and miracles (i.e., of metaphor) to personal and historical struggles.

Mark Angeles started with writing poems. Now he has come out of the closet, so to speak, with his unique fictional style of blending fantasy and wit to proletarian issues. His colloquial approach to the story was fresh. As in "Lazarus", the final story of the collection, where one character learned the truth coming out in the open just like the biblical character emerging from the closet-like cave of death after hearing the thunderous voice of a god. Similarly, the truth of fiction writing from a writer of sharpened senses has now emerged from the dark cave, revealing vital and sharp imperatives.