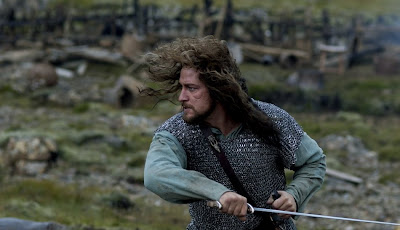 So. In the midst of this fiendish fun-book,
monsters flit to and fro, the hungry blokes.
Heaney's translation exhales and breathes.
It brooks no comparison mayhaps.
Old English’s boon is drinking in its words,
delivering blow by blow as swords clash
bilingually. The movie grays beyond
compare to the verses that believe
in the breast where the chain-mail protects
our hero’s blood, and flesh. The chain-mail cloth
is everything to the brave wolf’s safety net.
To the adventuring prince Beowulf, it brings
the bad bad wolf into the epic
big big.

Ho! The villain comes to town
to slay a lot of warriors, to orphan boys
and girls. Beowulf to the rescue, fasten
your seats. The ride’s rough but blood
is plentiful. Holy smack! The brutal
arm-of-monster is ripped-torn from
the sharp shoulder blade. It demands big-eyed
wonderment: the hero’s bare-hand handiwork,
He was unarmed, yes, yet he prevailed, leaving
a one-armed monster with a big wound
to lick. Thus ended the evil ambushing,
the terror-monger's terrible monstering.
The ligaments were showing, the wire of nerves.
Blood drip-dripped, the bad monster’s life’s snatched
as the arm was un-armed. While our insouciant hero
Beowulf was unharmed! Hurrah!

The death-den is inviting men to the death.
God-Messiah we pray for the strength of one man:
the macho muscles of the brawn Beowulf.
He was the stoic power of the people. He must
have crunched up to the bone, built strength
to the marrow, exercised fastidiously, lifted
weights, then aghast, his enemies
must cower and declare their sincere cowardice
else their heads fall to the side, leaving
headless necks atop headless bodies.
Heeded, less and more, the call of poetry -
Heaney was bold to use words that build
realism of battle scenes and gruesome gore.

Act Two was the jolly vengeance of angry ma.
Grendel was grand yet his mother was grander.
Monsters extraordinaire, the twosome trolls
haunted the lands of Denmark, mark it.
The battleground was ever wet, the sea.
Beowulf brought his diving gear and
dived to the bottom of the muck where
the ugly wicked momma sat femme fatally.
Nothing was as risky as that, cannibally,
a truesome truth that grew out of some
pure greed and gluttony, an evil hue.
The underwater skirmish would make
the non-swimmer squirm in his skin.
Beowulf emerged from the water victorious,
the aqua-monster was victimized,
drowned by her own amphibious lungs.

Ha! Enter the dragon breathing fire
in each cranny and nook. The cave of treasure
was thieved and dragon went berserk.
The gold must be returned by hook
or by crooked ways. The reader on edge, at the precipice’s
edge, suspense suspended, hanging by threads.
Spiderman’s finally defeated, crawling on all fours
after inflicting the draconian wound to his enemy.
Testosterone’s elevated to the throne,
Pure energy, pure pyre and fireworks.
The visual effects eye-popped and thrown
the reader out of balance watching
with bated breath, as the hero bathed in sweat.
The ring-leader was un-ringed, the hero
was un-kinged, escaped his final escapade,
delivered his final feeble speech. The people
were aggrieved by this smashing turn of events.
Exeunt knifed dragon and slain dragon-slayer.

Before the blogger forgets, via dismembered
memory, the rating is waiting: five out of five
stars. And may it shine as it brings
a shiner, a result of a hardline punch.
The hard lines of poetry were not by an epigone.
The poet had versed-translated them epically
with the spirit, mayhaps, of nobility,
of Anglo-Saxon succession of virtues
and vices that continue to this day.
Contemporary reader wasn't held at bay.
The interest waxed and did not wane.
It was bloody and disarming.