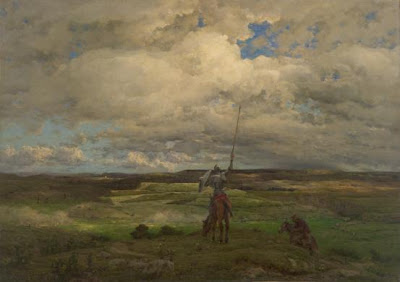 I’ve started Don Quixote for windmills for the mind, a group readalong that's being organized by Stu at Winstonsdad's Blog. I had the book with me since last year and was only searching for an opportunity to tackle it. What better way to read this millennial object than with a group of readers. Millennial in terms of scope, importance, and length (i.e., running at almost 1,000 pages or more). I don't know where I'll find the gumption to read this all by myself.

Reading started on July 19 and discussion begins July 26. Most of the readers will be reading the translation of Edith Grossman (Vintage, 2005) though other translations of the Quixote will do. I will be reading the text of John Rutherford (Penguin Classics, 2003), 1032 pages in all, including endnotes. That will be some 100 pages per week, for 10 weeks.

In an essay called "One Master, Many Cervantes," Latin America scholar Ilan Stavans said that there are 18 different English versions of the book (19 if one includes Pierre Menard's unusual "translation"). In the past decade alone, 3 translations of the book came out, from Grossman, Tom Lathrop, and John Rutherford. Earlier translations were by Samuel Putnam and Burton Raffel, among others. As to which translation is likely to be the most faithful, there are varying opinions. I particularly sought out the Rutherford translation in the bookstore on the basis of Margaret Jull Costa's indorsement of it:

Don Quixote makes huge demands on the translator: there is comedy, broad and subtle, poetry, good and deliberately dire, there are proverbs and puns, and, above all, there is Cervantes' own wry, playful voice as narrator. Both of those "anniversary" translations [Grossman's and Rutherford's] were good, but it seems to me that John Rutherford's translation (the one that was largely ignored) most satisfyingly meets the challenge to the translator and does what all fine English translations should do, breathing English life into every sentence. If you don't know Spanish and have never read Don Quixote or are thinking of reading it again, then this is the English translation I would recommend, recreating as it does the novel's vibrant (and, to the modern sensibility, sometimes cruel) humour, and doing equal honour to its pathos.

I'll take Jull Costa's word for it. Her translations of Javier Marías and José Saramago are among my favorite books from Iberia.

On the other hand, Stavans loved the version of Grossman who transformed Cervantes' prose into "a deliciously postmodern American hodgepodge." "What makes the translations superior," Stavans notes, "is the symmetry between form and content. More than anything else, what makes them an endless source of curiosity is the way they connect with readers across time. Grossman makes Cervantes look good. What else can an author wish for from a translator?"

There is another opinion about this matter of Don Quixote translation. If you ask Roberto Bolaño, he wouldn't care whose English version he will be reading. Not least because he knew Spanish but because of some interesting conjectures. He said something to that effect in an interview (collected in Roberto Bolaño: The Last Interview, and partly quoted here):

A work like Don Quijote can resist even the worst translator. As a matter of fact, it can resist mutilation, the loss of numerous pages and even a shit storm. Thus, with everything against it—bad translation, incomplete and ruined—any version of Quijote would still have very much to stay to a Chinese or an African reader. And that is literature. We may lose a lot along the way. Without a doubt. But perhaps that was its destiny.

He went further in an essay ("Translation Is An Anvil," translated by Guillermo Parra) from Entre paréntesis (Editorial Anagrama, 2004; forthcoming in English translation by Natasha Wimmer):

Cervantes, who was underestimated and disdained while he was alive, is our greatest novelist. There is hardly any disagreement about this. He is also the greatest novelist – according to some the inventor of the novel – in lands where Spanish is not spoken and where the work of Cervantes is known, above all, thanks to translations. These translations can be good or not, which isn’t an obstacle for the Quijote’s reason to impose itself or fertilize the imagination of thousands of readers, who don’t care about verbal luxury or the rhythm and force of Cervantean prosody which any translation, no matter how good it is, will undo or dissolve.

Sterne owes Cervantes a great deal, and in the XIX century, the novelistic century par excellence, Dickens does too. Neither one, it’s almost too obvious to say it, knew Spanish, from which we can deduce that they read the adventures of Quijote in English. What is marvelous – and yet natural, in this case – is that those translations, good or not, knew how to transmit what in the case of Quevedo or Góngora they didn’t and probably never will: what distinguishes an absolute masterpiece from a dry masterpiece, or, if it’s possible to say so, a living literature, a literature that belongs to all mankind, from a literature that merely belongs to a specific tribe or to a segment of that specific tribe.

There are two radical ideas here. One is that a translation is not an obstacle to "fertilize the imagination" of a reader. The other one is that any translation, without exception, undoes or dissolves the "verbal luxury or the rhythm and force of Cervanean prosody." Still, a residue of the living masterpiece will rub off on the reader. Perhaps, if Bolaño's theory will hold, only a work with a capacious vision as the Quixote can get away with the conceit, nay, treason of translation. (Which leads me to think whether the great Latin American novel Grande Sertão: Veredas by João Guimarães Rosa, the Brazilian Ulysses, also survived its botched translation.) Perhaps also the active reader of Don Q, in any language, is its best translator, with the passages being received by the brain and converted in a visual basic program code of imaginative interpretation, or whatever happens in the critical faculties, ghost in the shell. The converse, at least, is generally accepted to be true. That is, the translator as one of the closest readers there can be.