I didn't think I shall ever finish The Seven Madmen, Roberto Arlt's infamous novel, in time for the end of the world. I tried to pace myself, reading a few pages at a time, but the virus of desolation spread rapidly to contaminate my buoyant spirit. I'm far from the finish line on this one. I'm hardly halfway through the novel. Definitely not your average picker-upper read.

Remo Erdosain, the protagonist, might as well be frolicking in purgatory. At the start of the novel we found him down and hard on his luck, having been accused of stealing money from his company and being given an ultimatum to settle the money he stole. As he walked the streets of Buenos Aires, trying to find a way out of his sticky situation, he encountered a gallery of characters, in various states of derangement. How bleak the outlook for Erdosain. The very air he breathed seemed saturated with depression and desperation. Erdosain was fucked. The novel was packed with an emotional wallop.

Let us say, for the sole purpose of comparison, that Erdosain is a citizen under the regime of Kim Jong-un. In this case, of course, Buenos Aires is Pyongyang, and Argentina is North Korea. That was an unoriginal approach. But you get the drift.

What's being paraded were hollow, cartoon characters, defined only by their anguish and revulsion. Characters wallowing in monotony and boredom. Even their flashes of paranoia and distrust were predictable. Wretchedness piled on top of wretchedness. What's worse than a damned soul?

He felt as though blood was pouring from every cranny of his soul – as if it was being torn by a drill. With his powers of reasoning numbed, stunned with anguish, he set out on a wild search for a brothel. It was then he experienced the horror of empty nothingness, that luminous horror like the dazzling brilliance of the sun as it bounces off the curved surface of a salt-flat.


The novel was full of these brilliant metaphors of light and darkness. The same light that blinded Meursault in Camus's L'Étranger or Tajomaru in Akutagawa's "In a Grove". In fact the novel was swimming in perverse metaphors.

Here's another example: "It seemed to Erdosain that each worry was an owl that flitted from one branch of his suffering to the next." That was the formulation of translator Nick Caistor who said he tried to avoid straightening the repetitions, lack of grammatical accuracy, and wayward logic of Arlt.

Los sietes locos was in fact translated twice in English, the first one in 1984 by Naomi Lindstrom, published by Godine. She translated the same sentence snappily as: "He felt each spasm of grief hopping like an owl from branch to branch in his misery." That sounded more wayward to me.

Lindstrom:
Like a horse with its guts torn out by a bull, mucking around in its own viscera, every step he took drained his lungs of their lifeblood.

Caistor:
Just as horses who have had their guts ripped out by a bull slither about in their own intestines, so every step that Erdosain took left him with a little less lifeblood in his lungs.


The violence in that sentence was palpable and exact and scientific. At the level of a sentence, Arlt conjured the devil in the details. One's life was at stake in each Arlt sentence. A bullet fired into the chest, close to the heart, gave a life or death sentence: "His life was saved only due to the fact that this organ contracted at the precise moment the bullet whizzed by." Whew!

What Erdosain was longing for was redemption for his soul, but we were almost sure he would not get it in this life.

"What am I doing with my life?" he would ask himself, trying with that question to shed light on the origins of this anxiety which led him to long for an existence where the next day would not be merely time measured out in a repetition of today, but something different and totally unexpected, like in the plots of North American films, where yesterdays tramp suddenly becomes today's secret society boss, and the gold-digging secretary turns out to be multimillionairess in disguise.


Let us say, it was a fictional fulfillment of desire. Erdosain was longing for fiction, for something unpredictable, "something different and totally unexpected". Wasn't that an existentialist objective?

Arlt's world was a beehive of lowlifes in the entrails of Buenos Aires. Whores and gangsters and tormented souls rubbed shoulders with pseudo-anarchists and terrorists. There's a fuzzy destabilization plot to rid the world of the bourgeois army. Society was a sewer connected to the latrines of emo individuals. Still, the perplexity and the questioning mode of Erdosain made for a novel of pathetic grandeur.

Lindstrom (81):
“I’m nothing in everyone’s eyes. But still, if tomorrow I throw a bomb or murder Barsut, suddenly I’m everything, the man who exists, the man for whom generations of criminologists have prepared punishments, jails, and theories… That’s really weird! And yet, only crime can affirm my existence, just as evil is all that affirms the presence of man on earth.. Really, this is all so weird. Still, despite everything, there is darkness and mankind’s soul is sad. Infinitely sad. But that can’t be how life is. If tomorrow I figured out why that can’t be how life is, I’d pinch myself and disinflate like a balloon spewing out all these lies I’m filled with.”

Caistor (88-89):
I'm nothing to anyone. And yet, if tomorrow I throw a bomb or kill Barsut, then I become everything, a man who exists, a man who generations of legal experts have prepared punishments, gaols, and theories for. ... That's so strange! And yet it is only thanks to crime that I can affirm my existence, just as it is only evil which affirms man's presence on earth. ... All this is very strange. And yet despite everything, darkness does exist, and man's soul is full of sorrow. Infinite sorrow. But that cannot be all there is to life. Something inside me tells me life cannot be like that. If I could only discover the precise reason why life cannot be that way, I could stick a pin in myself, and all this hot air of lies would be deflated like a balloon.


Roberto Bolaño (the poor Chilean) supplied a back cover blurb and afterword to the 2015 UK edition. The latter was the infamous essay, or speech, from Between Parentheses where Bolaño described three strains of doom-virus infecting the Argentinean literary canon. The essay was hardly a flattering portrait of Arlt's novelistic enterprise. Read properly (i.e., literally), Bolaño was saying Arlt could not be a basis for an Argentinean literary school or movement because of his pure fatalism. For him, Arlt's art was infected. He compared Arlt to Onetti. Both "[opted] for the parched and silent abyss." Arlt's writing represented a desertification of literature that guaranteed the destruction of literature. That may or may not be exactly a damning judgement, but it was an ambivalent assessment of Arlt's fiction. And yet he considered Arlt one of the "exceptional writers and literary giants" in Argentina. It was a love-hate judgement.

I think Bolaño was more irked by Ricardo Piglia's championing of Arlt's flavor of fiction than by Arlt himself, whom he called blameless. In fact, he was wary of (false) prophets or literary apostles or disciples. He could not bear César Aira trumpeting Osvaldo Lamborghini's legacy. The literature of doom as represented by the two Osvaldos (Soriano and Lamborghini) and Arlt (to some extent) is a self-destructive enterprise. The language of novels in this mold devours itself.

Bolaño delivered the speech "The Vagaries of the Literature of Doom" in December 2002 in Barcelona at the Kósmopolis International Festival of Literature. He prefaced his reading as follows:


The self-contradictions in those opening statements were glaring. Who needs a self-help book if one is sick of the literature of doom?

1. The 1984 Lindstrom translation. Talk about literalism in depicting seven mad persons. Almost cool, if only for the rapacious swimmers in the background. 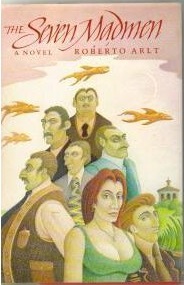 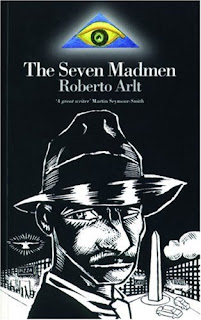 3. The 2015 edition of Serpent's Tail. Nothing remarkable here. 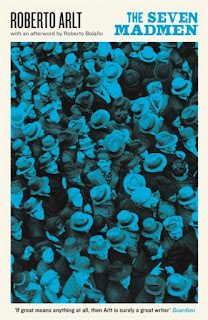 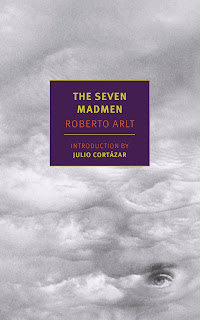 Passages from Naomi Lindstrom's translation of The Seven Madmen quoted above are taken from Never Stop Reading. All Bolaño quotes are from Between Parentheses, translated by Natasha Wimmer.

Caravana de recuerdos hosts The 2015 Argentinean (& Algerian) Literature(s) of Doom until the end of the month.