Diary of the War of the Pig


Diary of the War of the Pig by Adolfo Bioy Casares, translated by Gregory Woodruff and Donald A. Yates (E. P. Dutton, 1988) 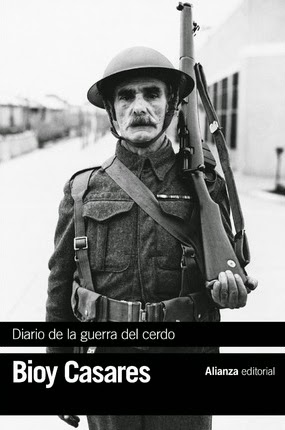 "A proper doomsday spectacle," said one character in this apocalyptic novel by Adolfo Bioy Casares (1914-1999). He was aptly named Dante. "These crazy, abominable things going on everywhere—if they aren't a sign that the end of the world is near, then what do they mean?" Indeed, what could these heinous events mean?

In an Argentinean neighborhood—or nation (the scope of the epidemic was suddenly broadened)—old men and women were singled out and harmed. They were hunted, mauled, even killed. The war on the old people, perpetrated by the youth (who else), began without warning. They were derogatorily branded as "pigs," "real hogs," on account of the people supposedly being "greedy, selfish, materialistic, and eternally grumbling." Talk about a deep generation gap. The mania against old people went out of hand. It was as if the young people were infected by hate for the old.

From out of the confusion of noises, distinct sounds began to emerge: curses, blows, groans, the rattle of iron and sheet metal, someone panting for breath. Out of the shadows and into the ashen light surged a gang of boys, yelling at the top of their lungs, brandishing clubs and iron bars, pounding frantically at a shapeless mass lying huddled amid garbage cans and piles of refuse. Vidal caught a glimpse of the enraged faces—obviously young, drunk with arrogance. Under his breath Arévalo said, "That—on the ground—it's the newspaper vendor, don Manuel."


Don Manuel was the very first victim. Everything went awry from then on. Don Isidro Vidal, the main subject of this diary of the war, was too naive to initially detect the brutal nature of the war. He seemed to deny at first that such an inexplicable thing was possible at all. He was in denial, perhaps also smitten by a kind of mass delusion that gripped the nation and galvanized the young to weed out the old.

Originally published in Buenos Aires in 1969, the paperback's blurb did not forget to remind readers that the novel was "written almost a decade before the death squads disrupted Argentina." Bioy (or his translators) used the term "repression squad" in the novel. Diario de la guerra del cerdo certainly predated the Guerra Sucia (Dirty War) of Argentina, 1974-1983, which would make Bioy a remarkable writer of prescience. Except that the age group for the novel seemed to have been the opposite. The average age group for the desaparecidos or the forcibly disappeared was between the teens and mid-thirties. Bioy could not possibly have anticipated this dirty business.

The only way to sustain this prescient, allegorical aspect of the novel was to consider the old as a metaphor, or synecdoche, for the young. The old, that is, as stand-in for the youth. The band of old men in which Don Isidro Vidal was a member often referred to themselves playfully as "boys", although the expression "did not indicate ... any complex and unconscious need to pass for young men; it is explained rather by the fact that once they were young and had then justifiably used the term with one another." Vidal was, strictly speaking, not as old as his comrades; he (and his old friends too) was called "young in heart" and "in the prime of life" by young acquaintances. And yet he really felt his age. He and his aged friends were wont to relive their younger days. And yet Vidal would reflect that "at heart every man is a boy disguised as a grownup."

The allegory—if we can use this unfortunate term for these extreme novels—was further compounded by the dream-like logic governing the strange events of the war. The mess was becoming more and more universal in scope. As one of Vidal's old friends mentioned: "We used to read in the papers about things like this happening to persons we didn't know. Now it's happening to people right in the neighborhood."

There were many reasons put forward for the liquidation of the old. They were supposedly more and more "a burden to the family." A Marxist reading of the encroachment of capitalism perhaps. (Contrast this unkind situation with the treatment of the elderly in Inoue Yasushi's memoirs of his mother.)

And then there's senicide. One character pointed out how the Eskimo and the Lapps take their old away and leave them for dead in the cold. It might be cultural, the antipathy for the old, or there might be no reason at all. People simply "have gone mad ... filled with hatred."

Whatever the reason for madness and hatred, what elevated this novel or fable—let's totally drop the unfortunate term "allegory"—was the way it gradually developed its premise and succeeding events in a realist manner. It was all too tragically feasible. Like Blindness by Senhor Saramago and La Peste by Monsieur Camus, Bioy's story was grounded in the reality of an extreme situation. He followed a logical sequence of events. He had seen his story through. Right to its painful conclusion. And that was enough for the stifling scent of doomsday to trouble us.

If symbols are any good at all, according to W. G. Sebald, then they have to have multiple meanings behind them. This statement was as much political as literary. Not to have anticipated any political events but to have avoided the obvious. This was the democracy of genius. As in Saramago's Blindness, Bioy encapsulated the nature of evil in an indirect way.

People say that a number of explanations are less convincing than a single one, but the fact is that there is more than one reason for almost everything. And it might be that there is always something to be gained by avoiding the truth.

For The 2014 Argentinean (& Uruguayan) Literature of Doom.

Email ThisBlogThis!Share to TwitterShare to FacebookShare to Pinterest
Labels: Adolfo Bioy Casares, Diary of the War of the Pig, Donald A. Yates, Gregory Woodruff