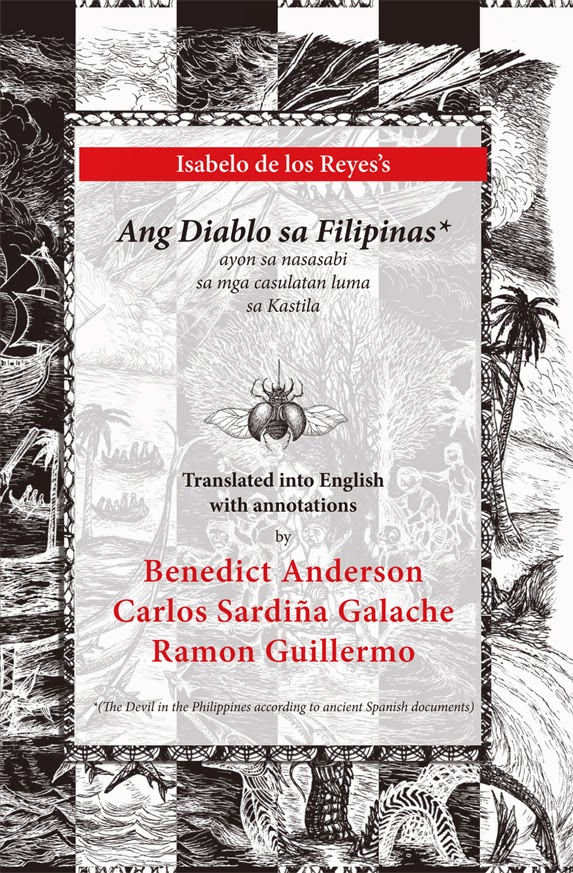 In 1886, when Isabelo de los Reyes was 23 years old, he published a story in Spanish in La Oceania Española, a Manila newspaper. In 1889 it was serialized in four parts in the bilingual La España Oriental, appearing in Spanish and in Tagalog translation. El Diablo en Filipinas is a horror story dealing with supernatural occurrences of a legion of devils in the Philippine islands. It also happens to be a comedy. In fact, this is a horror story of colonialism, based on 15th and 16th century documents produced by four members of the Spanish clergy based on their stay in the country: Diego Aduarte (1566-1636), Francisco Colín, SJ (c. 1625-60), Gaspar de San Agustin (1650-1724), and Juan Francisco de San Antonio (1682-1744).

The horror story arose from the methodical ways with which the four friars collectively inventoried various demonic encounters and their interpretations of them according to the Catholic doctrine. The devilish manifestations in the Spanish chronicles were recounted through the conversation between the first person narrator and his bookish friend Gatmaitan. Like spin doctors, the priests appropriated or retold the native stories of the "devil" and supplanted them with stories consistent to their own dogmatic faith of good and evil, God and Satan (Diablo). The real horror story appeared to be the systematic erasure or recasting of native beliefs, the "exorcism" of folk stories and their replacement by new Spanish versions.

The story takes place in Bulacan where the narrator and Gatmaitan, upon learning of the death of a directorcillo, visited the house of the dead man's widow. They were ushered into the dead man's library where they found copies of the friars' chronicles mentioning stories about the Devil, local seers, sorcerers, and witches. The bulk of the narrative was the exchange between the two friends, with the narrator playing the part of the skeptic and Gatmaitan the impressionable believer. By the end of the story, they were so steeped with the fearsome contents of the books that when a rat crossed the library floor Gatmaitan was so frightened he thought it was the devil ghost of the departed official. As he ran out of the room, he banged his head on the door. When the narrator hastily tried to help him, the latter tripped over and crashed on top of him.

The comedy was apparent from the credulous reactions of the characters to the passages they were reading. The lengthy quotations and paraphrases from extant documents lent a historic and deadpan air into the conversation. It was surreal fiction when the source stories were documentary sources and there were historical contexts expanded in the copious annotations by the translators. Certainly there was a touch of (evil) fun to be derived in this diabolic treatise of the Devil in the Philippines.

According to Anderson, Isabelo de los Reyes wrote this comedy to show how the "medievally superstitious friars were still wailing about the paganism, animism, and supersitions of the 'natives.'"

The Spaniards brought with them Catholic fantasies, which gradually entered into local languages—e.g. demonio (demonito too), Diablo, Duende, Sirena, Kapre and so on. Thus Satan arrived with the colonial conquest. But more importantly Isabelo wanted to put Catholic conceptions under the microscope of secular science, especially Folk-lore Studies. Legends and myths are well worth studying from the outside as mere passing cultural phenomena. Filipinos should learn to see Catholicism's imaginary in the same category as paganism's—pure Folklore.


Satan arrived with the colonial conquest. Even if the friars considered themselves the 'savior' of a 'heathen' people, Satan himself, it could be argued, is the colonial master, the one who supplanted old superstitions with new ones. Take for example a passage from Historia (1640)  by the Dominican Friar Diego de Aduarte:

The chronicler added that in this manner the witches, with the help of the Devil [el Diablo], made themselves owners 'of the haciendas, food and personages among all the Indios.' It looks like these wicked women are quite unlike the mangcuculam [sorcerers], and these old ladies say that they know how to get revenge in any way they wish.'

Seeing that I looked at him with great admiration, Gatmaitan added: "Yes, that's right. You should believe in the Devil [Diablo]. After all, he presented himself to many of the Saints and even Jesus Christ. And since you have done justice to the reputation of Señor Aduarte, and since we have encountered his ghost in this library, let us amuse ourselves by reading what he had to say about the craziness of demons in the Philippines. What we find on page 70 is curious. There Aduarte notes that a group of Pangasinenses, wandering about in their homeland—before the arrival of the Dominicans, i.e before 1587—heard a powerful and frightening voice. It was the voice of Apolaqui, their God of War, who said to them: I weep to see the completion of what I expected for many years, namely that you would welcome some foreigners with white teeth and hooded heads, who would implant amidst your houses crossed poles (crosses) to torment me all the more. I am leaving you to seek people who will follow me, for you have abandoned me, your ancient lord, for foreigners.


The abandonment of old gods (or devils) was indeed the triumph of colonialism. The chroniclers reinforced the stories of the anguish of the old devils who tried all they could, fancy that, to dispel the new god. To prevent the baptism and conversion of the people into a new faith.