The five authors of PseudoAbsurdoKapritsoUlo would have us believe that what we are about to read are stories of the rawest form, like sashimi. That what we have in our hands are stories almost as good as plotless, or half-baked, being far from "overcooked" tales with "overkill" plot. The preface was entitled "Babala: Bakit Hindi Mo Dapat Basahin ang Dyornal na Ito" (Warning: Why You Shouldn't Read This Journal), parts of which were reproduced at the back of the book. It didn't mince any words.

(All stories here surely disobey the king's wishes, spit on the face of your feudal pops, slap your pretentious teacher, and all are the stories of children of god out of wedlock. You will not root for any protagonist or super characters here because the stories themselves are the protagonists and all characters are full of angst.
...
And to the critics of traditional literature, don't try reading this because you don't need to. What for? eh, the only ones you know how to slam are the style and manner of telling stories. We are not required to read a lot of books before we could write. Our short experience, as well as what we see in the roads and waysides, is enough. Indeed that's where you could find all shit. As what they say, practice first before theory. so don't you dare read this shit if you're not a complete nitwit!)

Forewarned is forearmed. That acrimonious tone was already set by the book's cover showing a fetus sucking its left thumb and displaying a dirty finger on its right. The back cover showed two dogs having sex. And the title was deliberately worded to spell PAK U in contraction. As if these weren't enough, there's a blurb by one Jack Alvarez and an introduction by the activist poet Mark Angeles. Their very tones will offend any wide-eyed Bible reader.

The "Ungaz boys" would have us believe then that what we have is something like a swearword, something obscene, taboo, a transgressive work. Something that pushed the boundaries of fiction to something the devil (and god) may care. In short, something that went against the grain of traditional Filipino literature because its very source materials were the things hidden from the civilized smiles of political correctness.

I couldn't help but dig the attitude. The deep-seated antagonism. But did the Ungaz boys actually deliver the goods on Third World deep shit?

Well, yes and no. It turned out the authors are one hell of a bunch of tricksters and jesters. They were most unreliable, inconsistent, and in total deep (literary) shit. For one, they really could write strings of sentences and end them with punctuation marks. Some stories were so good I wonder if all that marketing and packaging were necessary. What we have are stories premised on shock value but nonetheless are stories that do respect the dignity of a person, that captures the seedy reality of existence. That's reality with a lowercase "r" for they were mostly the lives of lowlifes, drug addicts, frustrated individuals, drunks, and sentimental lovers. All that the escapism of science fiction and urban fantasy wanted to escape from. The sorrows of young Werthers, Oedipus complexes, and portraits of the hunger artists as young men.

The stories in PAK U were conceptualized as works that upend existing modes of expression set by the canons and high priests of Filipino literature. They posed themselves as anti-establishment. And for the most part they were. Some stories were riddled by typos and misspellings one wouldn't dare contest the fact that they are of the rawest sushi form. In fact, the typos were like honorable badges gained after a long night of fighting the demons in the head. The visible scratches and wounds of frustrated writing. Some proper names were not capitalized, as if their lowercase status grant them the right to look the reader in the eye and say, I defy you. I am not sic (sic).

The four sections "Pseudo", "Absurdo", "Kapritso" (Caprice), and "Ulo" (Head) were each introduced by an epigraph and tattoo-like drawing. The very epigraphs belied the fact that the writers were not big readers or were not influenced by some philosopher (Freud! Nietzsche!) or rock band (Pink Floyd).

Stories ranged from flash fiction fillers to send-ups of social realist stories in the mold of Mga Agos sa Disyerto (Streams of the Desert), the 1960s counter-movement in Tagalog writing which sought to oppose the perceived desertification of the local literary landscape. The pieces were rife with wordplays and puns, not to mention the rich vocabulary of a pottymouth, and often punctuated with a punchline so strong it knocked the hell out of the counterpuncher (as in Ronaldo Vivo Jr.'s "Catcher" which caught me off guard I wanted to howl through the long night in utter despair).

The Ungaz boys were right. The stories were the main characters. They attracted attention to themselves. As with the very first story "Iglesia ng Red Horse ng mga Disipulo ng Emperador: Ang gabi ng pagsamba ni Kristal Magdalena" (Iglesia of Red Horse of the Disciples of Emperador: The night of worship of Kristal Magdalena) wherein the holy mass was taken as a template for something like an all night drinking session. Or perhaps a creative writing workshop over the holy spirit of bottles. One thing was sure. There was something close to a consecration (or desecration) to this congress of the faithful.

My favorite writer in the anthology is Ronaldo Vivo Jr. who displayed a mature handling of narrative structure, as in the anticlimactic yet still moving ending of "Room Six-O-Three". The narrator of this story reminded me of Murakami Ryū's in Sixty-Nine. In fact, I was also reminded of "the Other Murakami" in the unadulterated thrill and the sick atmosphere of most stories here. But the most obvious literary model had to be Norman Wilwayco, the leading Filipino writer of transgression.

Perhaps what made PAK U an exciting collection was its satirical bite and versatility. We have, for example, "A Complex E[soterik]rotik Reality", about well, that complex unnameable and titillating reality, reminiscent of the transgressive movies of a master filmmaker like Peque Gallaga. We also have, for example, the commentaries of Manong Google (Big Brother Google) in Christian De Jesus' story "Hin-Dot Com" (a play on the word hindot, which is slang for fucking). Big Brother Google was the ubiquitous author of the artificial happiness in the ICT age.

(*Big Brother Google: People search hard for substitutes to their daily lives in a space of indefinite depth, width, distance and height, in what they call cyberspace and internet. They have created a virtual world where they themselves are demigods. And now that they succeeded in creating an artificial recourse, they did their best to make real and true its interior walls (3D). The people, trying their best to shun the real world and their natural ways, crafted an earth and people of imitation and artificial make, but they also tried hard to fashion out of these a real world and a breathing people. They complicated everything. The dimwits!)

Oh hail, zeitgest! The story was simply about a boy who was addicted to the pleasures of the Internet. I'm not going to romanticize the concept but here we have the cyberspace in the age of make-believe, the age of borrowed or second-hand reality. Cyberspace artificiality bred the addictive zombie state of attention deficit, the infinitesimal attention span of a mouse click exploding in the face of our Copy-Paste Generation. For me, the story typified PAK U's intended or unintended effect as a balm and antithesis to all the garbage wrought by shit-noise and shit-talk all around the hyperspace.

It was a science fiction world we live in, and PAK U was here to revive readers after waking up from this beautiful nightmare. Poverty and drug addition and teen angst were here depicted in all their loud realities.

Any publicity is still publicity and so I could appreciate how the PR machinery behind PAK U tried to project notoriety, if not infamy. The journal functioned as its own marketing device to test the reader's incredulity.

And of course, the journal did not live up to all the hype proclaimed by its marketing apparatus. Plotless? Half-baked stories? Uninfluenced writers? Who are we kidding? The journal (apparatus) knew it could never anticipate the reader's or critic's reaction. The apparatus was there to distract the reader from the complex esoteric/erotic reality, to jolt the literary critics of tradition out of their pastoral literary reverie, to inject dark comedy to light comedy. We've been had.

The medium is not the message. The work behind the medium is the essence, as what "Obrang Maestra" (Master Work) by Christian De Jesus (almost too good a name to be a pseudonym) would say:

("The schooling that you prescribe is the one teaching me to ride on the complicated culture of a well-off life. I am taught to be selfish and blind to the true color of society. I learn nothing because I am prevented from freely discussing ideas. Mom, I shall break free and draw my own destiny. Colorful, bright, free. A piece of work no one could erase. The art of living is the most efective teacher in this world. The obra is the maestra.")

So sincere, epigrammatic, word-playful. I dig the frivolous, offensive, and sincere wordplays in this book. They make the language richer and lustier. (The best wordplayer in PAK U was probably Erwin Dayrit. I mean, the crass words these guys came up with! Playing with words like Gollum playing with his precious thing.)

I will end with blurb-ready statements. (I've heard the UNGAZPress is collecting them as a marketing device for its "ikalawang putok"--second explosion, second issue.)

PAK U is a brave new collection for a braver new world, a visceral and scintillating cosplay of blood, semen, sweat, and gore, worthy of real conversation over hard drinking sessions and wasted nights. This debut offering of UNGAZPress is transgressive fiction at its fucked up best.

Five out of five dirty fingers. 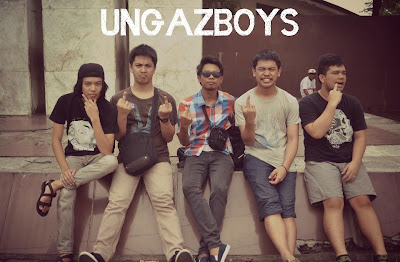 Thanks to K.D. and to UNGAZPress for the copy of PAK U.