Woman in the Dunes (directed by Teshigahara Hiroshi)

Woman in the Dunes (1964)
Directed by Teshigahara Hiroshi
Written by Abé Kobo based on his novel
2 hours, 27 minutes; with English subtitles 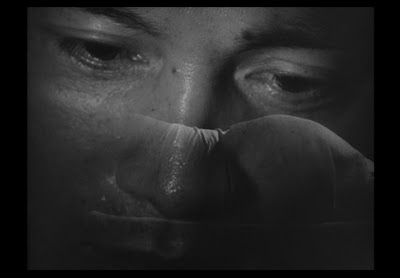 The story is about Niki Jumpei (played by Okada Eiji), a teacher who made a field trip to a desert near the sea. He collects insect specimens. As an amateur entomologist, he is determined to discover an unrecorded beetle that would make his name. Trying to find lodgings for the night, he is helped by men of the village to descend a sand pit leading to a hut using a rope ladder. A woman living below (the "woman in the dunes", Kishida Kyōko) will take him in for the night. When he wakes up in the morning, however, he finds the rope ladder is removed. He realizes that he is trapped. Against his will, he is held down there to help the woman clear away the accumulating sand that continually threatens to bury the village.

Sand is the element that propels the novelist Abé Kobo's story, and the film captures its tactile physicality. The sense of place is grainy, and the black and white photography enhances all the textures. Of sand on skin, sand on hair strand, sand mixed with beads of sweat, wind carving the face of sand cliffs, sand percolating in the air. The close ups of the two characters' perspiring faces and bodies show the gray grains of sand sticking on the open pores of their skin. Outside the hut, the landscape is suffused with flowing sand, falling sand, sliding sand. The very sand is alive. It gets in your eyes.

As opposed to Kafka's portrait of a man seeking employment under an unavailing power structure in The Castle, Abé and Teshigahara's depiction of a man's imprisonment into work itself, into slavery, for the sole purpose of daily shoveling away sand, is seen as an existentialist predicament of modern man. Both K. and Jumpei, however, do initially resist their fates and work toward changing their contrasting "employment status". If anything, Jumpei's extreme situation shares more with Josef K. in The Trial who one day finds himself guilty of an unknown and unknowable offense. This is apparent in a passage in the book where Jumpei reflected on his fate.

This entire nightmare could not be happening. It was too outlandish. Was it permissible to snare, exactly like a mouse or an insect, a man who had his certificate of medical insurance, someone who had paid his taxes, who was employed, and whose family records were in order? He could not believe it. Perhaps there was some mistake; it was bound to be a mistake. There was nothing to do but assume that it was a mistake.

As a Castle employee tells K. with ironic certainty: No errors occur, and even if an error does occur, ... who can finally say that it is an error. As with any fertile allegorical story, Woman in the Dunes dramatizes a situation that can be read in many ways. Jumpei's entrapment can be seen as a spiritual imprisonment. In context, the novel is published in 1962 and is set in 1955, ten years after the atomic bombings of the cities of Hiroshima and Nagasaki, the events that led to the surrender of Japan in the world war.

As works of this period, the novel and film are grounded in postwar anxiety. The threat of a destructive war and nuclear event still hangs in the air. This is not referenced verbally in the film, but in the novel it is directly alluded to. Apart from the titles of articles in a newspaper, such as "Ingredient in Onions Found Effective in Treatment of Radiation Injuries", a reference to the war is given in conversation between the two characters.

"But I have taken walks," she said abruptly in her monotonous, withdrawn voice. "Really, they used to make me walk a lot. Until I came here. I used to carry a baby around for a long time. I was really tired out with all the walking.
...
Yes, he remembered, when everything was in ruins some ten years ago [1945], everybody desperately wanted not to have to walk. And now, were they glutted with this freedom from walking? he wondered.

The woman here, who is unnamed throughout both film and novel, is presented as a victim of war. Homeless, she must have wandered around after escaping from air bombings until she finds this seaside community. When the character of the woman was introduced for the first time, she is called "old hag" by the village men (from the subtitles; in the book, translated by E. Dale Saunders, she was referred to as "Granny") but she is actually a young woman, about thirty years of age. Perhaps her wartime experiences has aged her. Maybe she has been living in the desert sand, still in the front lines of destruction, since time immemorial.

Sand, its oppression, can be thought of as symbol of time or eternity (as in sands of time). Its dynamic processes are powerful, destructive, and beautiful. In the book, Jumpei equates unsympathetic sand with death, the "beauty of death", "a rejection of the stationary state",

... a world where existence was a series of states. The beauty of sand ... belonged to death. It was the beauty of death that ran through the magnificence of its ruins and its great power of destruction.

The imagery of the natural destruction wrought by sand is not that different from the destruction wrought by wars. Both lead to peoples being left homeless and destitute. The sand pit, therefore, can also be seen as a bomb shelter where people take cover in order to survive the air raids. The apparent conflict is between the meaninglessness of resistance and the discovery of meaning out of an extreme environmental situation.

For all its stifling and suffocating set up, the hopeful ending of Woman in the Dunes can be seen as a response to Rousseau's proposition of a universal social contract. Man is born free, and everywhere finds himself enchained. Living in an inhospitable environment, under parched conditions, sentenced into a lifetime of manual labor, man's resilience is tested to its outer limits. Jumpei is in denial of his innate punishment. He is answerable to the general will of the people (the villagers) and his acknowledgement of it can lead to his redemption.

Though K., Josef K., and Jumpei shared the seeming futility of life experience, the latter's slow acceptance of his absurd condition through the repetition of activities and the discovery of new aspects of desert living that are robust for scientific investigation, his curiosity for knowledge signal a renewal of life in the face of perpetual destruction.

Teshigahara's film adaptation is faithful to Abé's science fiction. Human nature is presented with a savage precision, as with the scene where the masked villagers gathered round the sand pit to witness Jumpei's temptation and his consequent psychological undoing. The accompanying ritualistic beats of drum heighten the primitive voyeurism.

The technical aspect of Teshigahara's direction is excellent. But beyond the production values, the film is to be credited for bringing out through tactile images Abé's novelistic use of illusion and perspective. Perspective or point of view as a way of looking at the scheme of things, a way of recognizing one's place in the world. Illusion as the image we think we see. At the end of the film, after numerous failures to escape the sand pit, Jumpei has seen through the illusion and has gained a deeper perspective of his enchained state of being. This perspective is illustrated in the novel through the image of a Möbius strip, a continuous band of twisted paper where front and back is indistinguishable.

He was still in the hole, but it seemed as if he were already outside. Turning around, he could see the whole scene. You can't really judge a mosaic if you don't look at it from a distance. If you really get close to it you don't get away from one detail only to get caught in another. Perhaps what he had been seeing up until now was not the sand but grains of sand.

In the movie, the thinking and penetrating gaze of actor Okada Eiji, his fierce meditation on the immensity of the sand dunes, as if looking from a farther distance and within a bigger desert picture, gives him a novelistic perspective of his state of nature. He is both outside and inside the pit. He is both free and enslaved at the same time. His duty now is to live and rethink his own morbid diagnosis of his condition. He will study the emergent properties of sand. Sand is its own paradigm shift.

My viewing of this Japanese film, with popcorn, is due to two events: the World Cinema Series 2012 by Caroline and Foreign Film Festival by Richard.