The Wild Goose by Mori Ōgai, translated with an introduction by Burton Watson (Center for Japanese Studies - The University of Michigan, 1995) 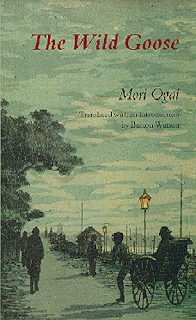 The events of my story took place some time ago—in 1880, the thirteenth year of the Meiji era, to be exact.


At the start of this short novel, the narrator described his friendship with a handsome student named Okada. Okada often walked the streets of Muenzaka in the evening and one time he happened upon a beautiful young woman living in a house in a silent neighborhood. Through his regular walks he had become acquainted with her, even if "the appearance of the house and the way the woman dressed strongly suggested that she was someone's mistress."


Even in ill health she would have been beautiful, but in fact she was young and healthy, and today her usual good looks had been heightened by careful makeup and grooming. To my eyes she seemed to possess a beauty wholly beyond anything I had noted earlier, and her face shone with a kind of radiance. The effect was dazzling.


The Wild Goose, also known as The Wild Geese, by Mori Ōgai (1862-1922) was a dazzling and iconic Japanese novel about Otama, the woman who agreed to become the mistress of Suezō, a shrewd moneylender, and her acquaintance with Okada, the young student she fell in love with. Through gentle prose, Ōgai presented their interlinked stories while illuminating the attitudes and mores of late nineteenth century Japan, at the cusp of its transition to a modernist society.

It was a time when men of means like Suezō could hire go-betweens to negotiate and procure for them a mistress. The practice was then taboo and mistresses were then, as now, strongly discriminated against. Otama's previous marriage to a policeman turned out to be a sham, leaving her completely discouraged about her future prospects. Her plight was to be poor and her acquiescence to become a rich man's mistress was driven by her need to secure material comforts for herself and her old father.

Part of the charm of the story was the narrator's close observations of Otama, Suezō, and Okada's motives and actions. Like the character of Suezō, the man despised by society for his occupation as moneylender, the narrator had "keen powers of observation", in the way he delineated not only three strong characters but believable secondary characters as well. Suezō's suspicious wife Otsune and Otama's father had their own complexities.

Ōgai's marked evocation of a distinct place and culture and the marginal status of women at the time revealed a "not-quite" vanished age, in the sense that his characters' desires, despair, and anguish were just as transparent as the present. In addition, Ōgai's use of animal symbols (a pair of caged birds, a fierce snake, a flock of geese) and references to classical Chinese and Japanese literature had such cunning and grace that they didn't feel like literary devices at all but the very essence of the story, like fire to the brazier.


In her mortification there was very little hatred for the world or for people. If one were to ask exactly what in fact she resented, one would have to answer that it was her own fate. Through no fault of her own she was made to suffer persecution, and this was what she found so painful. When she was deceived and abandoned by the police officer, she had felt this mortification, and recently, when she realized that she must become a mistress, she experienced it again. Now she learned that she was not only a mistress but the mistress of a despised moneylender, and her despair, which had been ground smooth between the teeth of time and washed of its color in the waters of resignation, assumed once more in her heart its stark outline.


The unnamed narrator was a voice of kindness. His large sympathy for the fates of Otama and his friend Okada was unmistakable, relating their stories with penetrating understanding, even affecting a degree of respect and love for the two characters. He later revealed his storytelling method as a play on two perspectives: "Just as two images combine in a stereoscope to form a single picture, so the events I observed earlier and those that were described to me later have been fitted together to make this story of mine."

With Natsume Sōseki, Tōson Shimazaki, Shiga Naoya, and Akutagawa Ryunosuke, Ōgai was an exemplary prewar Japanese writer of national stature, and The Wild Goose (Gan), published serially in 1911-13, was his most esteemed work. According to Murakami Haruki (if I remember him correctly), Gan had the same special status in Japan as Sōseki's I Am a Cat, Botchan, and Kokoro; Akutagawa's stories; and Shiga's A Dark Night's Passing.

Translator Burton Watson mentioned in his thorough introduction that the original title Gan could mean both the singular and plural words, hence the two distinct English titles. I have also read the earlier 1959 translation, The Wild Geese, by Kingo Ochiai and Sanford Goldstein, and in fact selected it as one of my favorite reads of 2010. I don't have that copy anymore and so I can't make a general comparison of the translations. But this full translation by Watson contains endorsements from Edwin McClellan and Edward Seidensticker, two powerhouse Japanese translators, so that should count for something. Indeed this version I find quite beautiful.