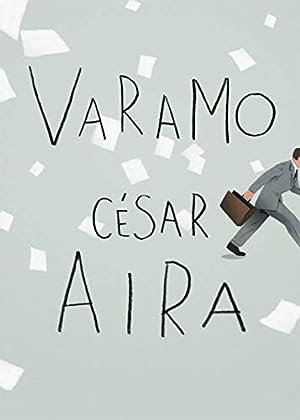 
The book delivered the goods. This was to be expected. It's a well written tale and also an often funny book. What else to expect from Chris Andrews's seemingly effortless version? "Slim, cerebral, witty, fanciful, and idiosyncratic", the front blurb from Aura Estrada's review of Aira's early translations. Varamo (orig. 2002) was indeed all of the above. The plot seesawed from the sublime to the grotesque (that embalmed piscine species was quite a character). Varamo, the titular character, was your average Panamanian government employee. But he was also the future author of a literary masterpiece. He was marked for greatness. At the beginning of the novella, he didn't know it. The reader knew, but the full scintillating details were kept in the dark. The story will trace the moment-by-moment events that led to the composition of his epic poem. That was the beautiful premise of reverse engineering. I did not like it, however, as much as I wanted to. César Aira has already been there. César Aira has done that. Varamo partly disappoints because it conformed very much to the template of an Aira book. That was almost a paradox. Okay, that's a paradox. I.e., if an Aira book is as unpredictable as the weather, then the book cannot, will not, follow a certain template. The formula lay in non-formulaic spontaneous reality. Let me put it this way: Varamo was another elegant, but not radical, variation of Aira's experiments. I am very much in awe of his spontaneity and clarity of prose, his anything-goes method which was deceptively simple, the elegant discipline governing his fictional inventions. This was evident in the psychopathic atmosphere of How I Became a Nun and the quincuncial (read: connect-the-dots) approach of The Hare (orig. 1991). Both works exhibited disconnections that for some reason clicked into their proper places, as if through mental leaps of faith. Varamo possessed the trademark digressions, witticisms, and anachronistic turns of plot. However, too much nudge-nudge, wink-wink can bring the strategy "constant flight forward" to a standstill. The use of "free indirect style", for example, was made too much a metafictional Big Deal. Ultimately, it lacked elements that would compensate for its messiness. The sonic velocity of, say, The Seamstress and the Wind, or the frenetic energy of, say, The Literary Conference. Freedom, free writing, is Aira's only constraint. But too much freedom in writing can backfire. Varamo wore its minor novella status all too proudly. And I expected a lot given that there are dozens of books to choose from Aira's backlist to translate. If Roberto Bolaño was asked, he would readily suggest two which are yet to be translated: his 1981 "breakthrough" novel Ema, la cautiva (Ema, the Captive) and El llanto (1992, The Crying). And if the critic Ignacio Echevarría (via Caravana de recuerdos) was asked, the single most essential Aira was La liebre, which fortunately has already been translated. A good choice, I must say. The Hare, at a fair novel length, has the heft and substance of a long sojourn. Its adventures hover perilously between high and low entertainments, hanging as if at an angle of repose, at any moment at risk from falling off a cliff.... A lightning charge striking with all its pent-up electrical energy.... A short circuit of brain synapse.... A numinous moment in time.... And I will have to say that the prose of translator Nick Caistor, which was slightly inelegant and unpolished and neutral and wry, lent a certain understatement to the statement. It was Aira without the airbrush of beautiful writing, not the superhero but his alter-ego. In other words, this reader was not after exercises of perfection or near-perfection in a novelita. Let's face it. The long novel was the true test of a writer's métier. Arguable point, of course. But the form of the long novel, where anything can go wrong and the trappings of didacticism were ever present, where the temptation to over-deliver was stronger, where the writer struggles much harder to avoid false moves than make the right ones, the long form could provide a breath of fresher Aira. Publishers, take note. Go for the longer Aira, they were bound to be more spontaneous and more driven. And go for the critics' favorites. It would not hurt to consider "translating" the opinions of Spanish writers and critics. For one, the prestigious Semana list, of the 100 greatest Spanish-language novels of the past 25 years, had two Aira titles still awaiting translation. Cumpleaños (2001, Birthdays) is #82 in the list, while Una novela china (1987, A Novel of China) was fairly high at #56. (#71 Los fantasmas, 1990, was already translated as Ghosts.) Then there were stories waiting to be collected and translated. The short story masterpiece "Cecil Taylor", also highly praised by Bolaño, was long overdue. (At least things are looking up with the forthcoming books in the horizon. The Miracle Cures of a certain doctor is bound to introduce some funny medicine or wacky concoction. Also, the novels-in-cardboard-boxes from Eloísa Cartonera, hope to see them boxed up, too.) There was never any dearth of César Aira. It was just a matter of bringing out those diamonds in the rough.