Rashōmon and Other Stories (Akutagawa Ryūnosuke)

Consider the first story. A Police Commissioner interviews seven individuals regarding an alleged crime of murder:


- The first witness is a woodcutter who discovered the body of the dead man;

- the second witness is a travelling Buddhist priest who met the man and his wife prior to the incident;

- the third witness is a policeman who arrested the only suspect to the alleged crime;

- the fourth, an old woman, the dead man’s mother-in-law;

- the fifth is the bandit who confessed to the crime;

- the sixth is the wife of the dead man; and

- the final witness, the dead man himself speaking through a medium.


That’s it. We have the sketch of the story told from several points of view. The depositions of the first four witnesses overlap with each other, telling of what appears at first as a crime of passion. The last three witnesses are directly involved in the man’s death.

The novelty of this story, “In a Grove,” lies in the inconsistencies between the testimonies of the persons involved. The actual circumstances of the man’s death, which initially appears to be an obvious case of murder, become more and more complex and murky as different versions are presented. The elements of a successful crime (motive, opportunity, and means) are turned upside down in every successive telling. We do not know who is telling the truth. Everyone is complicit.

Akutagawa Ryūnosuke, the author of this short story, is a Japanese master of the form. In his hands, a short story is a short story. That is to say, it is quick. His words are efficient without sacrificing the complexity of a plot. His tales are suffused with nuance and concrete details. His themes are large themes. His main concerns are basic. He is interested in the ambiguities of human choice, the uncontrollable passions suddenly flaring, the travails of the outcast, and the futility of moral justifications.

My copy of Rashōmon and Other Stories is a reprint of the second edition of the book first published in 1952. It contains six pieces, all translated by Takashi Kojima, and with an introduction by Tanizaki Jun'ichirō translator Howard Hibbett.

In the book's preface, Takashi Kojima said that the six stories are selected with the aim of collecting the “finest and most representative writings” of Akutagawa. For a prolific writer such as Akutagawa, a mere representation of his best works in six servings, out of the more than a hundred stories he completed, appears to be non-representative at all. But there can be no doubt that the six pieces – six master pieces – are among his finest. Any collection that contains the first two in this book, “In a Grove” and “Rashōmon,” is a book to be treasured. Though it does not contain his other famous stories (“Hell-Screen” and “The Nose”), the book is a perfect sampler of Akutagawa’s literary output.

The “most comprehensive” collection of Akutagawa’s stories is said to be the Penguin compilation Rashōmon and Seventeen Other Stories (2006), translated by Jay Rubin and introduced by no less than Murakami Haruki. Murakami mentions in his introduction that Akutagawa is his third personal favorite among “Japanese national writers,” after Sōseki Natsume and Tanizaki. Three of the collected stories here – “Yam Gruel”, “The Martyr”, and “Kesa and Morito” – are not included in the Penguin edition. Maybe that’s a loss for that edition because these three are real gems. 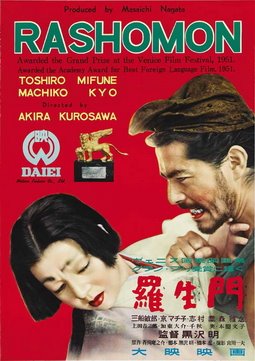 When I watched the 1950 film Rashōmon, directed by Akira Kurosawa, in the UP Film Center more than ten years ago, during a retrospective of films by two Asian directors (Kurosawa and Satyajit Ray), I was not aware that it was based on two short stories by Akutagawa. The film was incontestably one of the finest produced in history. This six-story edition perhaps appeared as a kind of a movie tie-in edition of the film that was fast gaining critical and mass acclaim at that time.

I was dumbstruck during the screening of the film. Even now, I could still visualize the husband’s fiery eyes and stone-hard gaze on his wife after the bandit pursued and tricked the couple. Reading the source story was like reading a natural script of the film. It’s like watching again the entire film, a déjà vu experience.

The plot of the film was essentially that of “In a Grove,” while its landscape of waste and despair was borrowed from the story “Rashōmon”. Both “In a Grove” and “Rashōmon” deal with human selfishness: the manipulation of truth to justify oneself and the subjectivity of good at the behest of human avarice.

In the first story, the characters are consumed by the need to explain or justify their behavior before the High Police Commissioner, to bear witness to something they have “seen.” The film masterfully assigns the role of the High Police Commissioner to the audience, in the same way that the reader "acts" as the Commissioner who listens to all the versions of the story. Each version is tailored in such a way that it casts its teller in the role of the underdog or the wronged.

The “Rashōmon” story, like the first, is also about the relational value of truth and goodness. It's about a servant laid off from his job and left to wander around the gates of Rashōmon, an area notorious as hideout for thieves and dumping ground of corpses. In the face of this abject situation, the former servant is driven to do an “evil” thing in order to survive.

There lies the paradox of “Rashōmon”. When people are reduced to living at the margins, they are forced to do things that are considered to be taboo. They will die if they don’t. When life contracts into uselessness, subjectivity becomes a precondition of existence, “good” and “evil” following the theory of relativity.

Akutagawa’s stories (at least in the Kojima translation) are deceptive because of their sketchy quality. They are not what you might call polished writing. Here and there are awkward sentence constructions. I don’t know if it is due to the translation, but a certain clunky quality of the prose is consistently displayed throughout. As if these are just rough drafts of a master who cannot be bothered to perfect his trade? And yet behind the rough outlines of the plotting are universal truths.

The pieces contain truths that most other forms took very long to develop. Akutagawa’s mastery is for a compression of details and a compacted intensity of feelings. Their power and impact are derived not from the flashes of technique but from a rhythm borne out of hurried recognitions. The fragility of life's convictions and principles dawn on us when the temple of the familiar was not found dwelling where it is supposed to. Is it in the inner sanctum of men? There is in fact no temple for Akutagawa, only a harsh condition of living, a bleak view of humanity, a state of nature characterized only by uncertainty.

Greed, hate, covetousness, pride, lust – these are the vices pictured in several stories in this collection. One can even add gluttony (to exaggerate a character’s craving in “Yam Gruel”) and get the picture of Akutagawa’s apparent subject matter – the seven deadly sins. His source of conflict is often perversion (e.g., “lust for lust’s sake” in "Kesa and Morito").

Characters pander to their base instincts. They tenaciously hold on to their own needs and wants, pursuing their wishes come what may. They are driven to it, their nature drove them to it. The environment entraps their soul.

Akutagawa’s is the kind of writing that makes your heartbeat race fast as you read it. And the kind that stops the heartbeat by some lately introduced complication. His stories, almost always period pieces, do not lose their contemporary feel. They are timeless and alive. They are like "the sublimity of life", which culminates, as one of the stories proclaims, “in the most precious moment of inspiration.”