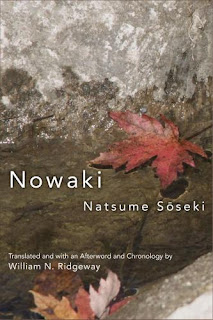 Nowaki was an early Natsume Sōseki (1867-1916) short novel first published in 1907. It was the story about an aging writer's hard stance on the ethical and moral responsibility of the artist in society. Sōseki dramatized this stance through the ex-middle school teacher Dōya’s philosophy of education.

A teacher who is satisfied in teaching from the textbook and earning his living this way is no different in theory from a tightrope artist who earns his living twirling a baton. Education is different from tightrope crossing and baton twirling. The acquisition of knowledge is just the beginning of education; the true purpose is the building of human character. To size up the large and the small, to weigh the light and the heavy, to distinguish between good and evil, to always know right from wrong, wisdom from folly, truth from falsehood—that is the purpose of learning.


Despite the soundness of his philosophy, the rather didactic delivery of his ideas and his methods led to Dōya being discredited by the school authorities. He was vilified by his students and shunned by the educational establishment for his uncompromising adherence to his principles. The book's propagandistic writing style probably hewed closely to the way Dōya described his frustrations of his "failed" generation and his prescriptions for regeneration by the youth.

A good contrast to Dōya’s worldview were those provided by two young men in the story. Inexperienced and impulsive and yet with strong artistic and literary inclinations, Takayanagi and Nakano were close friends who were newly graduated from the university. Nakano was from a well-off family, while his friend, the sickly Takayanagi, was dirt poor. The stark contrast in their backgrounds provided Sōseki an opportunity to explore the ways in which class status determines the dominant preoccupations of a writer. Nakano was concerned about the "anguish of love", while Takayanagi was bent on surviving the present world he described as "full of cynicism" and "an open competition of cold-heartedness":

“What I wish to write is not such a dreamy stuff as yours. Mine may not be pretty, but on the contrary it may be painful, stinging to read, yet I shall be satisfied if it should reveal my innermost feelings. Whether it is poetical or not, I do not care. I will have written well if I stab myself hard enough for the pain to make me jump and I am able to convey that pain to the reader, to make him say, ‘That hurt!’ I wish to enlighten the comfortable and complacent to the reality that can find no expression in their deepest dreams. I want to open the eyes of the debauchee to the essence of man, so that he may confess with bowed head that he had never entertained such a thought before but now acknowledges it to be undeniably true.—A different direction entirely from yours [Nakano's].”


The confessions of the characters, full of passion and intensity, were writ large in the book. A lot more of these ‘insights’ of the heart and mind made for a didactic novel, but the ideas must be welcomed for their honesty and the forthcoming way they were blurted out and shared. It was inevitable that, of the two friends, it was Takayanagi (who happened to be one of the students who harassed Dōya while still a teacher) who will be attracted to the singular philosophy of Dōya. His were also the inner conflicts of a person of seeming duality or contradiction which Sōseki was delineating in his other books.

“There is something strange about your face. The right side in the sunlight looks very ruddy, whereas the left side in the shadows looks unhealthy. Strange. As if your face appears as a conjoining of half a mask of tragedy and half a mask of comedy,” declared Nakano without taking a breath.


The two masks of comedy and tragedy were evident in many scenes, making it hard whether to categorize them as serious or satire. The delicate balance of the two weights always threatened to tilt on one side or the other, a constant juggling that required novelistic skill—proof that this early work was important on its own in the Sōsekian oeuvre. Nowaki was not only an epigrammatic novel, with every other page containing the kind of insane quotes worth underlining, but also a key work closely tethered to the novelist's themes. It explicitly identified and discussed the abstractions that beset the protagonists of later novels. It could be Sōseki's most 'preachy' novel, surprisingly political in parts, and was a definite throwback to the subtle feelings and subdued atmospheres generated by works such as Kokoro and Mon. Nevertheless it illuminated the undercurrent of cynicism running through his mature novels. The unnamed 'disease' of his protagonists in the late novels was here already identified and prefigured: the physical and psychological sickness arising from living a hard and poor life. The characters of Nowaki were likewise bent on attaining a form of salvation even as they wrote or continued living under the shadow of death.

What partly saved the novel from the ruts of sentimentality, and it seemed ever close to doing so, was its writing style, specifically, the unique sensibility of the omniscient point of view and free indirect style. The ubiquitous narrator's intrusion was distracting as it was instructive.

"What kind of associations?" she asked gently, placing one hand over the other. About two inches above her wrists were exposed, while the rest of her arms were hidden in the soft sleeves. Her kimono was of pink silk with a design of silver rain in intervals of heavy lines and light lines.
It was pleasant to see the fine fingers of the hand on top, each of which tapered off in a rounded shape to a gleaming nail. To be fine, fingers must be long and slender and yet provided with flesh soft enough to keep their delicate shape. Each finger must differ slightly from another, yet there must be harmony between them as a whole. There are fewer people with beautiful fingers than people with beautiful faces. A person with beautiful fingers must be in want of a precious ornament.
On a long slender finger the woman wore a brilliant object.


The uncalled-for intrusions and side comments in the text (To be fine, fingers must be long and slender ... There are fewer people with beautiful fingers than people with beautiful faces.) signaled the presence of an intelligent storyteller not answerable to the characters' actions. They also lightened the narrative and questioned its otherwise serious tone. There were indications that the "intrusive" omniscient narrator was pulling the reader's, and the characters', legs, telling more than what the characters needed to or cared to know. The characters were often wholly ignorant of the facts that the intrusive narrator was sharing:

An old haiku says, "One by one thoughts come to mind only to disintegrate like charcoal burned to ash." The wife probably did not know it. She went to the brazier in Dōya's room and began leveling the ashes with the tongs, drawing a circle because the brazier was round in shape.


The wife probably did not know it. But someone did. Elsewhere, Sōseki would sumptuously describe a well-decorated ornate living room visited by Dōya, only to let the reader know that Dōya himself was not a party to its appreciation: "The fireplace was still in disuse, concealed behind a small two-leaf folding screen placed one foot in front of it. Maroon damask curtains clashed with the general color scheme of the decoration, but this fact escaped Dōya's notice. Sensei had never in his life been in such as fine room as this." At one point the narrative contrasted the differences between Dōya's and Takayanagi's worldviews, only to point out the latter's lack of knowledge of these differences: "Such is the difference between one who exists for others [Dōya-sensei] and one who exists for himself [Takayanagi]. Such is the difference between one who leads others and one who relies on others. Such is the difference, even when both are solitary individuals. Takayanagi was not aware of these differences."

The adopted narrative style could get away with it. The seeming offense to the characters' ignorance of their surroundings, circumstances, and merits, only served to highlight their fallibility and humanness. Even with passages that seemed to offer a clue to the writer's credo, a strong hint of the funny could not be divorced from the unusual formulations.

Host and guest are one. There is no guest without a host and no host without a guest. It is only for the sake of convenience in our lives that we make a distinction between the two. We think of color and form as separate entities, though neither form nor color can exist independently. We think of technique and concept as separate entities, though in fact they are closely correlated. Once we understand this, we have allowed ourselves to enter a maze; and since life is most important to us, we find it more and more difficult to get out of the labyrinth, created for the sake of convenience in our lives, the deeper we proceed into it. Only when one is emancipated from the desires of life can this bewilderment be overcome. Takayanagi was a man who could not liberate himself from this desire. Consequently, he could not conceive of host and guest separately, obstinately attached to the idea that host is host and guest is guest. Whenever he met a superior guest, he felt attacked by invisible swords on every side. At this garden party Takayanagi felt as if he had taken a lone position against enemy troops.


All the blabber about "host and guest" in the first three sentences was too weird to take seriously. And then the following statements (We think of color and form ...) could almost be taken out of context and offered to represent the ideal artist's credo. And then, bang, there goes again the "host and guest" at the tail-end. All of which only emphasized the fact of poor Takayanagi lounging in his destitute clothes and clearly out of place in the party attended by the upper class.

In the translator's afteword, William N. Ridgeway mentioned that, with this latest translation, only Sōseki's novel Gubijinsō remains to be translated. (The Gate, for me his masterpiece so far, will appear in a retranslation from New York Review Books at the end of the year.) Also, according to Ridgeway, the word nowaki referred to the autumn wind blowing between September 1 and September 11, a time of "violent winds and typhoons, and of potential crises." The same wind blew at the culmination of the novel, a tour de force scene where Dōya was set to deliver his lecture to a hostile crowd, a speech which was oddly stirring for all its obtuse demagogic arguments. His speech underlined the crux of his hardline ideas on the necessity for artists and writers to embrace anti-materialism and on the limitations of freedom. For Dōya, and arguably for Sōseki himself, freedom is not a totally free commodity. It is subject to the exercise of morality: "Those born into a society without precedent ought to create their own precedent. Those who enjoy unlimited freedom are already limited by freedom itself. How to make use of this freedom is your responsibility, as well as your privilege. Gentlemen! If you do not maintain high ideals, your freedom is only depravity."

Nowaki contained the usual Sosekian pleasures and nuances. The characters, although sharply drawn, also functioned as abstract concepts or emblems of their self-expressions. More than a novel, it was an "essay on character", the very title of the manuscript Dōya was working on. Ridgeway compared this novel to Thomas Mann's Death in Venice. I think it's not a bad comparison.