Voyage Along the Horizon (Javier Marías) 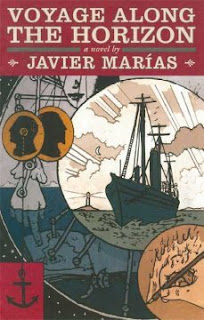 The day that witnessed the departure of the Tallahassee—a sailboat with a metal hull, three masts, and a steam engine, classified by Lloyds Register of Shipping as a mixed vessel, property of the Cunard White Star, built by Newport News Shipbuilding and Dry Dock Company in the United States, purchased by Great Britain (where it was newly registered in 1896, though its original name, that of the city where it was baptized, remained the same), capable of reaching a velocity of 11.5 knots, with capacity for seventy passengers, and operating under the command of Ship's Captain Eustace Seebohm, Englishman, and First Officer J. D. Kerrigan, American—there was a great celebration at the port of Marseilles. The ship was fêted and festooned with balloons, confetti, and streamers that dappled the surrounding waters with their dazzling colors. As they boarded the vessel one by one, the passengers were cheered by the onlookers. Finally, at ten in the morning, after all the obligatory ceremonies had finally come to a close, the boat pushed away from the coast with forty-two prominent society figures, fifteen men of science, and an inevitably furious, resentful crew.

—Voyage Along the Horizon by Javier Marías, translated by Kristina Cordero (McSweeney's, 2006)

This is a sophomore effort by Javier Marías, started when he was 19 years old and published two years later, in 1972. I'm still eagerly waiting for when his first book, Los dominios del lobo (1971, Domains of the Wolf), will appear in translation. That's that book, along with La asesina ilustrada (The Enlightened Assassin) by Enrique Vila-Matas, that for Roberto Bolaño, "marks a departure point for our generation."

Voyage Along the Horizon is, by Marías standards, a minor novel that I'm still glad to have read. One gets to see similarities and contrasts with the novelist's late style. In this, the young novelist already displayed a tendency for playful tinkering with plot. I can see why Bolaño, fed up with the imitations of magical realist novels of Boom writers, would prefer a novel by a young Marías. The form, structure, and diction of Voyage Along the Horizon eschewed the magical and folkloric reference; it did not anchor itself on "nationalist" literature. Instead it pays homage to the English adventure novels, openly acknowledging the influences of Joseph Conrad, Henry James, and Arthur Conan Doyle.

The time of the "novel within the novel" was 1904. A trip to Antarctica was organized by the charismatic and gloomy Captain Kerrigan, who invited men and women of prestige aboard the Tallahassee: writers, artists, and scientists. The idea for this kind of journey must be bold and vain at the time, but it is prophetic too. A similar trip was recently undertaken by "a mix of scientists, academics, students and journalists" to raise awareness about climate change (news link here, provided by a friend).

This journey is a background story framed by the present story where the unnamed narrator learns about a novelist named Victor Arledge who retreated from society and who died abjectly. A guest in the narrator's party mentions that he had with him a certain manuscript of a novel entrusted to him by a late friend. The novel is entitled Voyage Along the Horizon. (In true Marías mannerism, the name of the novelist behind this "inner" novel will not be revealed until well after halfway through the book.) The manuscript recounts the journey of the Tallahassee where Arledge was one of the passengers. Arledge's experiences aboard the ship may or may not have contributed to his mysterious decline in old age.

A young woman who studied the works of Arledge is very interested in the contents of the manuscript, so she asks the literary executor (Mr. Holden Branshaw or Hordern Bragshawe, the narrator "hadn't quite caught" the name) permission to read the novel which, once published, Branshaw (let's assume) strongly believes, would catapult his friend to literary limelight and would pave the way for him to be considered "one of the great novelists of his time". Later on, this assessment will change, and Branshaw will pass a definitively harsh judgement on the novel. The winking self-reference in this book must be one of its enjoyable aspects.

Instead of letting the lady borrow the novel, Mr. Branshaw invites the lady and the narrator to his house where he would read from his friend's story. From this unpublished manuscript of Voyage Along the Horizon, within this novel of the same title, Marías produces other branching stories in the form of letters, confessions, and investigations. The novelist luxuriates in the same storytelling tics and antics that characterize his later books. The safekeeping of secrets, the confession of unpleasant deeds, shady or morally corrupt characters, ever so lengthy digressions—these are all here, surprisingly anticipating the elements swirling in his literary cosmogony. In addition, the scenes in its pages are as unlikely as assembled: kidnapping, duel on a ship, smuggling on the shores of Formosa and Southeast Asia, pirate attack, journey in search of a habitable island.

For a writer who was always concerned with the act and art of storytelling, this novel is a kind of variation of his literary maneuvers. Marías may have hardened in his dense prose style, as in the "difficult" and extremely long Your Face Tomorrow, but his stance as a "secret sharer" and "secret withholder" has always been intact.

"One must learn how to cultivate the art of ambiguity", someone said in the novel. A principle that the novel seems to have taken to heart. The novel resists resolution that would tie up everything neatly together. Readers are instead treated to nontraditional murder and mystery stories, wide open to interpretation, and whose ultimate ending provides only cold comfort.

The book contained an appendix—an interview called "Eight Questions for Javier Marías" where he discussed the novel's style and influences, its metafictional elements and open ending, and the quality of his fiction that predisposes it to translation. Asked what he wanted to tell readers who were mystified by the ending, he answered: "Conclusions and final explanations are often the most irrelevant—and disappointing—parts of a novel. What counts the most—and what we remember the most—is the atmosphere, the style, the path, the journey, and the world in which we have immersed ourselves for a few hours or a few days, while reading a novel or watching a movie. What matters, then, is the journey along the horizon—in other words, the journey that never ends."