"An American reader must learn Portuguese, too, if he is to experience fully Rosa's poetic power and wit", said Barbara Shelby in her preface to her translation of Primeiras Estórias (1962) as The Third Bank of the River and Other Stories (1968). The statement was obviously meant for readers of other nationalities. It's just that Shelby's American perspective was more pronounced in her presentation of the Brazilian master, evident in her comparison of João Guimarães Rosa to American masters. If Alison Entrekin's translation (or "reconstruction") of Grande Sertão: Veredas would ever see the light of day, then that could be another glimpse at the poetic power and wit of JGR. Meanwhile, the short stories and sketches in The Third Bank of the River could also reveal flashes of linguistic genius and panache. It could possibly tide over the infinite patience of a fan waiting for three to five years for a more reckless and disruptive translation of the masterpiece.

I was only just four stories in to the collection and already I could say that Shelby tried her best to render in English JGR's supposedly pyrotechnical prose full of notorious neologisms and word plays. It had the same confidence as the more recent Englishing of JGR's stories in The Jaguar (2001) by David Treece. I counted a half dozen overlapping stories between The Jaguar and The Third Bank. Perhaps I would make a side by side reading of them; that would make for a more enriching reading. In any case, an encounter with the first four stories in this collection already validated for me JGR's abiding interest in the dark and quirky sides of men and women and how they could be represented in complex and surreal and madcap words and formulations. The epiphanies and revelations of human nature and deep feelings were as sublime as Joyce's.

When they got home he no longer wanted to go outside. The yard held a lost nostalgia, a vague remorse; he hardly knew what. The childish thoughts in his little head were still in the hieroglyphic stage. Nevertheless he went out after supper. And saw it—the unostentatious, sweetly unexpected surprise. The turkey was there! Oh, no, it wasn't. Not the same one. It was smaller, much less turkey. It had the coral color, the sumptuous train, the ruff, and the gurgling gobble, but its painful elegance lacked the hauteur, the rotundity, the taut, globular beauty of the other. Even so, its coming and its presence were some consolation.

Everything was softened by melancholy, even the day; that is, the coming of twilight. Nightfall is sorrowful everywhere. The stillness stole out from where it was kept. The boy was soothed in a half-frightened way by his own despair; some inner force was working in him, putting down roots to strengthen his soul.

The turkey advanced to the edge of the forest. There it caught sight of—what was it? He could hardly make it out, it was getting so dark. Well, if it wasn't the other turkey's cut-off head, thrown on the trash heap! The boy felt pity and ecstasy. [from "The Thin Edge of Happiness"]


"O, there’s a . . . fib!" Imagine a child's disappointment after witnessing a live turkey and a beheaded one.

Quirkiness and innocence were the order of the day: the characters were either innocent children with exploratory or adventurous consciousness (as in "The Thin Edge of Happiness") or adults suddenly let loose or unhinged ("Tantarum, My Boss"; "Much Ado"). And there was still JGR's snappy folk dialogues and aphoristic tendencies:

All eternity, all certainty, was lost; in a breath, in the glimmer of a sigh, that which is most precious is taken from us. ["The Thin Edge of Happiness"]

I did just what he said, as there wasn't any help for it; to handle a lunatic it takes a lunatic and a half. The blue of those big eyes of his went right through me; he may have been crazy, but he knew how to give orders. His beard was pointing up in the air—that crisscross tangled beard of his without a single white hair lying straight. He waved his arms around like a windmill. He was better than a free sample. ["Tantarum, My Boss"]


Like Quixote confronting windmills, JGR's old man, Tantarum, was prone to actions hard to explain for evident madness or semi-madness. They just went up and about and did things out of logic or hard to fathom.


João Guimarães Rosa was one of the literary heroes of this blog. I first encountered his novel The Devil to Pay in the Backlands in the university library, drawn to the novel's kick-ass title. Needless to say, my life of reading was never the same again, and this after reading a supposedly flawed and unfaithful translation.

In the 10 years of this blog's existence, I have written more than 10 blog posts on him, one of which was an investigation of the supposed deletion of "The Slaughter of the Ponies" section in The Devil to Pay in the Backlands (this post). After reading Gregory Rabassa's memoirs, If This Be Treason, which I acquired in 2010 via Bookmooch, I became interested in this section of Grande Sertão that Rabassa said was excluded in the translation. I had to order The Borzoi Anthology of Latin American Literature, Volume II from a bookseller-friend in the U.S. just to verify Gregory Rabassa's claim in his memoirs. 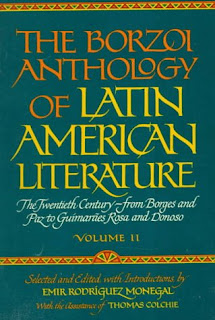 There was a reference to this section in "'Too Many Cooks Spoil the Broth': Mistranslating Grande Sertao: Veredas into Oblivion", a journal article by James Remington Krause (Chasqui, November 2015). The article could be found at this link (see footnote 9). Krause did not cite my 2010 blog post as a source of his 2015 article. Does referencing blog posts—examples of so-called "gray literature", write-ups that were not peer-reviewed—undermine the scholarship and rigor of academic articles? Book blogging is "dead", indeed.

A Goodreads reviewer, Nathan "N.R." Gaddis, also made the same serendipitous discovery in his review of The Devil to Pay in the Backlands, mentioning the Borzoi Anthology, Rabassa, and "the slaughter of the ponies" section. He was even inspired to type in the whole extract from the novel, in the two English versions. Found here.

My next post: João Guimarães Rosa as a master aphorist.