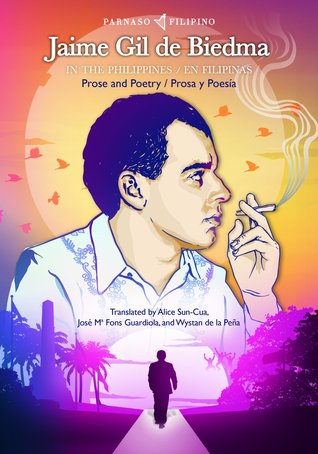 Presumably an important but neglected Spanish poet of the second half of the past century, Jaime Gil de Biedma (1929-1990) remained largely inaccessible to English. That was until the publication of this collection in the Philippines. The only other book of his that appeared in translation was a selection of his well-known poems in Longing: Selected Poems (City Lights Books, 2001), translated by James Nolan.

I must say at the outset that this volume, a hefty bilingual edition, was a tome at 644 pages, plus 25 prefatory pages, plus 16 pages of photographs in the midsection. It was obvious that the publisher was a big fan. The end product was groaning with supplementary and scholarly materials, including two forewords, a page dedicated to the memory of Carmen Balcells, beautifully printed endpapers/separators for every major section of the book, a 47-page introduction by publisher Gaspar Vibal, an Autobiographical Note to the poems (1982), author’s note to the first (1975) and second (1981) editions of the poems, notes to the poems by Gaspar Vibal again. And these were only up to the end of the poesía part, which consists of three complete poetry collections: Las Personas del Verbo, Moralidades, and Poemas Póstumos.

The prosa part is Retrato del Artista en 1956, translated and annotated by Wystan de la Peña, which was also divided into three sections: Las islas de Circe, Informe sobre la administración general en Filipinas, and De regreso en Ítaca, each section terminating with translator's notes, for a total of 581 endnotes. I just managed to read up to the first section of the artist's "Portrait". The first and third parts were diary entries sandwiching a management report on Tabacalera, a well-known tobacco industry in the Philippines, for which JGB travelled all the way from Spain to oversee in the mid-1950s.

Rounding up the texts was a particularly informative annotated bibliography grouped by genre and theme, a chronology, an index, an about the translators page, and a final page with two longish blurbs. In the paperback edition that I bought from last year’s Manila International Book Fair, there was a front flyleaf containing JGB’s capsule biography, and end flyleaf with more blurbs. For a beautifully bound book, it was disappointing that the texts and the accompanying scholarly materials were not perfectly proofread. Nonetheless, the materials were well researched and certainly offered a welcome surfeit of information on the life and times of a unique, marginalized (non-mainstream) writer.

A reader interested only with a superficial introduction to JGB would surely complain about the extra pages. But one was afforded the option to immerse oneself into the depths and heights of a poet. JGB was apparently a slow writer and this was obvious from the slow cadence of his lines. Sometimes the poems were impervious. They occupied literal space yet seemingly told nothing particularly earth-shaking at first. But in the simplicity of openly declared feelings they sometimes revealed something close to an epiphany. Perhaps the inwardness of the poems was a subterfuge to JGB’s sexual identity and repressed expressions. Yet the political and sexual were interleaved in subtle wording, emanating from “el gran boquete abriéndose hacia dentro del alma”, as signaled in the poem “Ars Poetica”.

The nostalgia for the sun on the roof terraces,
against the dove-colored concrete wall
—nevertheless so vivid—and the sudden cold
that almost startles.

The sweetness, the warmth of the lips by oneself
amid the familiar street
as in a grand salon, where distant multitudes
would have arrived like beloved family.

Above all, the vertigo of time,
the enormous nothingness that opens towards the depths of the soul
while promises that fall in a faint
as if they were froth, float above.

It is surely the moment to ponder
that simply being alive demands something,
perhaps heroic deeds—or just
some humble common thing

whose earthly skin
is to be handled between the fingers, with a little faith?
Words, for example.
Familiar words, halfheartedly worn-out.

JGB could sound tender and forthright and conversational. But his frustrations were concealed between the lines. He wanted to rebel at being part of the bourgeoisie, and his poems were his attempts (futile, perhaps, but heroic attempts) to inclusivity. With the background of civil war and poverty in Spain and his reckoning with his homosexuality, JGB’s poetry was shaped by a conflation of private and public concerns. The idyllic Pagsanjan Falls—a tourist spot in Luzon Island which unfortunately became infamous for being a sex tourism haven for foreign child molesters and pedophiles in the 80s—as a backdrop of "Days in Pagsanjan" could sometimes evoke a Cavafy-like sensuality.

Like dreams, beyond
the idea of time,
dreams made of dreams I carry you,
days in Pagsanjan.

In the heat, after the denseness,
the river throbs again,
speckled like a reptile.
And in the dark atmosphere

under the flowering trees
—gleaming, humid,
when at night, we bathed—
each other’s bodies.

JGB, who died of AIDS complications in 1990, was an intermittent celebrant of love and romance. His impermeable poems sometimes gave way to open declarations, as in these lines from “Pandemic and Celeste”, which contained an epigraph from Catullus:

JGB's “Posthumous Poems”, published when the poet was still very much alive, was a distillation of his idea of moralities closely haunting mortalities. In this final anti-poetic sequence, somewhat in the tradition of Nicanor Parra, self-questioning, anti-self rants embodied the unself-conscious, fullest expression of one’s own devil’s advocate. One poem was called “Against Jaime Gil de Biedma”, another, “After the Death of Jaime Gil de Biedma”. The persona called "Jaime Gil de Biedma" in the poems could safely indulge in self-pity. It was a perfect way to put distance between the self and the Self.

What's the point, I'd like to know, in moving house,
leaving behind a basement darker
than my reputation—and that says a lot—
hanging small white lacy curtains
and taking a maidservant,
renouncing my bohemian days,
if you come later, you bore,
embarrassing boarder, an idiot wearing my suits,
loafer, good for nothing, shithead,
with your clean hands,
eating from my plate and dirtying the house?

The late night bars, the pimps,
the florists, the dead streets at dawn,
and the dimly lit elevators follow you
when you arrive drunk,
as you pause to look
at your ruined face in the mirror,
with eyes still raging
which you don't want to close.
And if I scold you,
you laugh at me, and remind me of the past
and say that I am getting old.

I could remind you that you are no longer charming.
Your casual style and your disdain
become ridiculous
when you are more than thirty years old,
and your enchanting smile
of a day-dreaming boy
—who feels sure to please—is a sad remnant,
a pathetic attempt,
While you look at me with pleading eyes
and cry and promise me
not to do it anymore.

If only you weren't such a whore!
And if I didn't know, so long ago,
that you're strong when I'm weak,
and that you're weak when I rage ...
Of your homecomings I keep a confused impression
of panic, of sadness, of unease,
and of hopelessness
and impatience and resentment
of suffering again once more,
the unforgivable humiliation
of excessive intimacy.

With a heavy heart I'll put you to bed,
like one who goes to hell
to sleep with you.
With each step dying of impotence,
stumbling over furniture
in the dark, we'll stagger our way through the flat,
clumsily embracing, wobbling
from alcohol and repressed sobs.
Oh, vile servitude of loving human beings,
and the vilest
is to be in love with oneself.

"A Body Is a Man's Best Friend" was almost reminiscent of Auden's "Lullaby". While Auden's rhythmic poem was essentially a tribute to a night of tryst, sleeping heads, faithless arms, and human love, one would reinterpret Gil de Biedma's (posthumous) intent considering its inclusion in a cycle of posthumous poems.

A Body is a Man's Best Friend

Time is not yet over,
and tomorrow is as far as a reef
that I can scarcely make out.

You don't feel
how time drips slowly in this room
with the light on, how the cold outside
laves the window panes... How fast
you fell asleep in my bed tonight, little animal,
with the simple nobility of necessity,
little creature, while I watched you.

Well, then, good night.
That quiet country
whose borders are those of your body
makes me feel like dying
while remembering life, or staying up
—tired and excited—waiting for dawn.

Alone with age, while you sleep
like someone who has never read a book,
little tiny creature: to be a human being
—more honest than in my arms—
therefore, a stranger.

If JGB was tucking his own "little" self to sleep, wasn't it a shocker that the self is none other than "The Other"? After all, he wrote in another antipoem, that "I saved myself writing / after the death of Jaime Gil de Biedma".


For Stu and Richard's Spanish and Portuguese Lit Months 2018.