The Cloak of God


The novels of Rosario de Guzman Lingat (1924-1997) were finally available locally in English thanks in large part to translator Soledad S. Reyes's championing of her literary outputs. Except for young adult novelist Ceres S.C. Alabado, Lingat happened to be the only female novelist with works translated from a Philippine language.

The production of local novels in the Philippines was rather poor in showing. In the 20th century, only 637 novels were published in the country: 365 novels written in Filipino, 95 translated to Filipino, and 177 saw print in English. The list was compiled in Bibliography of Filipino Novels, 1901-2000 (2011) by Patricia May B. Jurilla. I do not know the male to female novel production ratio, but the discrepancy could easily be assumed.

So far, from the 365 Filipino novels of the last century, only five were translated into English, mostly very recently, three of them Reyes's translations of Lingat's novels. This was a measly 1.4% of Filipino-to-English translation rate. In a nation of non-readers and readers-who-would-rather-read-English-bestsellers, this of course was not surprising. The market for translations was minuscule. 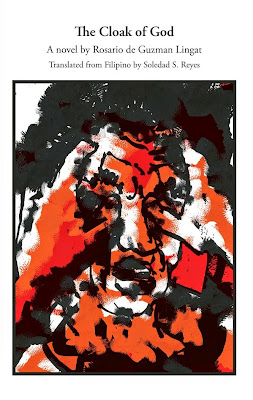 Lingat's novels, published in the 1960s and '70s, offered a historical glimpse into the social, political, and economic forces before and during the Martial Law years. Of her three novels translated in English – Kung Wala na ang Tag-araw (1969), Ano Ngayon, Ricky? (1971), and Ang Balabal ng Diyos (1975) – the latter perhaps provided the most oblique and powerful diagnosis of social chaos and confusion of the times, the artful culmination of the personal struggles of the anti-hero in The Death of Summer and the political activist in What Now, Ricky? It brought a tragicomical representation of mass uncertainty and delusion through the adventures of a failed theater actor (Felino Paras) who suddenly found himself revered, then venerated, as a religious prophet. It was all the more notable for being a novel of self-consciousness artistry, teeming with conscious character-actors "acting out roles created by a writer".

Felino was a reluctant prophet, at first. He acted out the part of a prophet of doom in order to avoid being found out as a criminal. He cribbed his lines from a play he was auditioning for and that he failed to get. He transformed his handsome features into that of a man of extreme piety and instantly realized he stumbled upon a mine when goods and donations from believers started pouring in.

But at what cost? His freedom and privacy were invaded. He could no longer keep to himself and freely go to bars and womanize.

Those vampires! There was no way they would leave him alone! They would not stop pursuing him! ...

He was being observed by all these people. They kept watch of his every move; they were waiting for that salvation they mistakenly believed he was praying for. These fanatics gripped by irrational terror!


Despite the stress and hassle his newfound calling gave him, he kept at it for purely material reasons. He acted out the part and continued to amass wealth from gullible people. He accidentally started a religious cult, with mostly agreeable ramifications.

As the days passed, the news spread fast. It reached the whole city and spread to the provinces. The end of the world was at hand! Darkness would engulf the earth and there would be rains of fire...


Felino's ministry grew, spilling over into the countryside. Churches were constructed to honor the True Faith. His charismatic presence, "a man standing erect, with eyes that radiated power, a role he had now learned to play to perfection, each opportunity for the faithful to listen to the full baritone voice", became most sought after. "He evoked fear and diffidence and inspired admiration and respect. Most of all, he was loved."

The novelist played the prophet's character to perfection. The salient role of religion in life was explored with irony and spontaneous comedy. The scenes were to the point; the dialogues were crisply delivered; the comedy of manners, of situations, of an anti-hero was inextricably linked to his accidental fate, and faith.

The Cloak of God was a very possible inspiration or influence to Himala (Miracle), a 1982 popular and critically acclaimed hit (cult) movie about a faith healer in a barrio. There were obvious parallelisms in how religious life took center stage in a needful society, and how the cult of art was manifest in the cult of religion and celebrity.

"But, is it true? Is it true that the end is near? That darkness will engulf the earth and there will be rains of fire?"

"You heard what I said last night."

The old man was gasping for breath; his knees were getting weaker.

"What do those people want from me, Mang Asyas?"

Felino was smiling inwardly, extremely pleased with himself. He raised his eyes and examined the ceiling so as not to let the old man get an inkling of this wave of pleasure coursing through his veins. Words plucked out of Gonzalo's [the playwright's] drama, which was never staged, raced through his mind.

And he said, "Compassion is shown to those who truly believe. Salvation is found only in True Faith."

Felino's eyes were glued to the dark corner of his room. How? The script of that mean-spirited Gonzalo did not say how!

The question was repeated. "How, sir?"

Felino lowered his eyes and looked grief-stricken. "I do not know how." It was an honest answer. "Leave me, Mang Asyas. I am preoccupied with my personal problems."


Since Felino played his role to perfection, providing the precise modulation of voice, dignity, and bearing as befits a preacher, who really could say he was a false prophet? In his seamlessly improvised speeches and sermons, in his sincere posture and imposture, who really could judge him?

One is tempted to ask, what kind of society breeds a perfect prophet in their midst? What hidden social arrangements and mores could allow new faith to take root, could compel a passionate and devoted following? Pertinent questions, the answers to which provide strong indicators of social imbalances in unjust, post-colonial regimes.

The final act of the novel was a shocker. The matter of fact comedy suddenly switched genre, into mind-bender speculative fiction or high-strung science fiction. Lingat manufactured values and meanings using the art of modern, self-parodying novel, as if to rattle and shake the devoutness of one's faith in fiction, to measure the depths of satire. She took to a higher level the implications of what it really meant to wear the mantle of God. Her outrageous plot lines would test the capacity of fiction to stupefy, to enact miracles that willingly defy mannered, realist fiction.