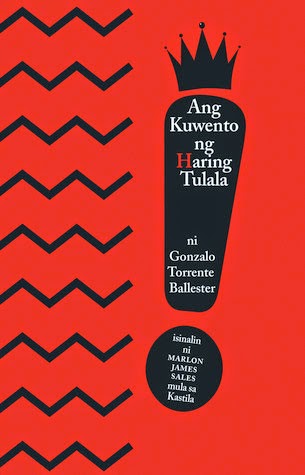 Crónica del rey pasmado (1989) was a comic novel set in the midst of 17th century Spanish Inquisition. Its writer, Gonzalo Torrente Ballester (1910-1999), was dead serious. Realism was one thing he would not let go of. Never mind if his story combined elements of the fantastical, the nonsensical, and the supernatural.

[Where have you seen a man who, in order to be with his wife alone, needs priests and protocols to interfere?

– In this part of the world where you find yourself, this as well as other sorcery is commonplace. Don't let go of reality.]


When it was learned the king slept the night before with a whore and later requested to see his own wife the queen naked, the news spread like wildfire in the kingdom of the religious. The die hard conservatives were scandalized and would have the king pay for his impure thoughts. Seeing his queen naked! Surely that was uncalled for.

In no time at all, the unforgivable offense became the agenda of an emergency meeting of the Holy Tribunal presided over by the Grand Inquisitor. The excellencies were hell bent to impose their doctrines. To add to the provocation, the country was raging a war against two territories and the king's indiscretion was seen as prelude to certain defeat. God would certainly punish the people for the sins of the king. And to add further to the devious turn of events, the Devil himself was seen roaming around in monstrous get up.

This period novel was a surprisingly sobering mirror of current times. Given the Church's penchant for intruding into secular affairs, the contemporary quality of its subject matter would not fade for a long time. Must leaders be put to a stricter set of moral standards than their subjects? Morality as a class issue, anyone?

Ang Kuwento ng Haring Tulala (The Tale of the Bewitched King) was translation into Filipino of Torrente Ballester's loud-funny novel of a sexually repressed young king and his kingdom under the clutches of clerical bigotry. The translator, Marlon James Sales, earlier produced his version of Gabriel Miró's Oleza novels, proving himself a proficient translator of satirical novels dealing with hypocrisy and religious conservatism. The two works were both concerned with what happens when dogmatism runs counter not so much against common sense (though it does that) but against human nature. As one character would have it: Magkaminsa'y maraming suliraning dulot ang matibay na pananampalataya sa kaayusan ng sambayanan. (There are times when resolute faith brings its fair share of problems to national peace and order.)

Miró's double novel had a more realistic bent. In terms of prose style it was a bit more dense, and the scope was broader. But the saucy topic and playful bent of Torrente Ballester compensated for its slim (186 pages in translation) and streamlined treatment of good and evil (or shall we say, sense and senselessness). Torrente Ballester's novel was faster paced, more spontaneous in giving a succession of hilarious set pieces. The awesome conversation between pragmatic Satan and a priest was one highlight of the novel, not to mention the long debate during the Holy Tribunal, the climactic picaresque scene involving the queen being spirited away to finally consort with the king, and cameo appearance by the poet Luis de Góngora. Did I mention it was funny and exciting? How it managed to be so in a novel where there are constant reminders of auto-da-fé was crazy. The erotic part was a bonus.

This Spanish novel also appeared earlier in English as The King Amaz'd: A Chronicle (1996, trans. Colin Smith) and was adapted into film. Readers in English and Filipino would have to content themselves with this lone translation of Torrente Ballester's fiction so far. The knowledge that more major works from the same novelist await translation was enough to give us hope. La saga/fuga de J.B. (The Epic/Escape of J.B., 1972), for instance, was said to be the master work, the 800-pager to loose oneself in. I wonder who would be the intrepid translator and publisher for the task.... Miguel of St. Orberose had the scoop on Torrente Ballester's must-translate texts. As it is, Ang Kuwento ng Haring Tulala was already a comic marvel in miniature.

For the Spanish Lit Month by Stu and Richard.

Correction (21 Sept. 2014): As obooki commented in a review in seraillon, Torrente Ballester has actually been previously translated into English with Don Juan, tr. Bernard Molloy (Iberia, 1986).