Adventures of a Child of War (Lin Acacio-Flores)


Adventures of a Child of War by Lin Acacio-Flores (Cacho Publishing House, 2002)


A novel for young readers, Adventures of a Child of War has as its historical backdrop the Second World War in the Philippines from 1941-45. The child of the title is Eduardo Aguilar who was from a middle class family in San Juan, Manila, and who in the course of the novel was exposed to brutal acts and circumstances of war – aerial bombings, hunger, ground fighting.

In 1942, after succumbing to the Japanese forces which ran over the strategic American military bases in the Philippines, General Douglas MacArthur of the American Army fled the country, with a promise to come back soon to liberate the Philippines. His return took all of three years – tatlong taong walang diyos (three godless years), as a Filipino film about the period portrayed it. During all that time, Eduardo came of age and graduated from playing child's games to war adventures no child should participate in at all.

The novelist Lin Acacio-Flores steered the narrative away from sentimentality and managed to depict a realistic war-torn community trying to surviving the reign of the Japanese Imperial Army. Eduardo's childhood adventures took on a new turn when he befriended Captain Abe, a Japanese officer, who took a liking to the boy and taught him to ride the captain's horse. The unlikely friendship of the two was one of the many ethical dilemmas of wartime life that troubled Eduardo's young mind. Is friendship with the enemy ever appropriate? Is that not a manifestation of "collaboration" with the conquerors?

The book's tone is often whimsical, derived as it is from young Eduardo's point of view. The serious episodes are sometimes tinged with comic relief. There was a scene for example when, faced by the threat of dying from hunger, Eduardo and his father had to steal sacks of rice which the Japanese confiscated from people and hoarded in a warehouse. One sack of rice had a hole in it and left a trail of rice grains in the road leading to Eduardo's house.

Must erase it! I thought. I looked around wildly for something like a giant blackboard eraser. None. Then I saw Mama's walis tingting [bamboo broom] leaning against the fence where she had left it.

I grabbed it, raced out into the street, swept the line from side to side up to where it wandered into the middle where people's feet had erased it. Mama followed me with another broom, a walis tingting fastened to a long stick. She swept away the rice other people had spilled in front of our house.

Back into the house we ran, she like a bony witch in her loose dark nightgown, dragging her broom. I had this crazy thought that if the Japanese came after her, she'd fly away on that broom. Gasping, she shut the door after the three of us. Papa locked it and leaned against it for a moment.


There is pathos in the fact that Eduardo's mother had become a "bony witch" in his eyes. People at that time had to eat less and less as the scarce food had to be rationed in small amounts.

One other noteworthy aspect of the book is it is one of those fiction embedded with real photographs. The photographs are taken from Shin Seiki (Bagong Araw ~ New Era), a wartime propaganda magazine published by the Japanese. The author explained her use of this device in a preface.

The decision to use photographs, instead of illustrations, came from a belief that more and more, the younger generations have forgotten the last great world war to reach our own shores, changing the history of our country – for good or ill – forever.


Indeed as time passes, the collective memory of the war becomes fainter and fainter in the consciousness of a new generation of Filipinos. I myself do not remember studying about the Japanese episode in my secondary schooling in the 1990s. My impression is that, save for some sporadic period movies, the second world war is seldom a topic of popular culture, let alone children's literature.

Actual photographs may lead young readers to ask questions about the truth behind fictional events. It can contribute to an understanding of historical situations they can hardly visualize. Photographs and diagrams such as the ones reproduced in the book – "Common Types of Air-Raid Shelters" and "Recommended Layouts of Open-Trench Air-Raid Shelters" – can facilitate understanding and critical perception of young readers.

The 1945 Battle of Manila (not directly presented in the novel), for example, is a significant event whose magnitude is now lost in the minds of the people. Texts and photographs (like the ones pictured at this link) may serve to add to the narratives of war and to national memory.

The novel ended with a climactic episode perpetuating a famous myth associated with the end of the war: the lost Yamashita treasure (popularized in the 2001 movie Yamashita: The Tiger's Treasure). True or not, the myth has come to exemplify the nature of war as built on the fortunes and tears of people. The discovery of the treasure, together with the possibility of owning riches beyond one's imagination, becomes another essential aspect of the story concerned about ethical choices in times of war, in a young readers' novel at that. 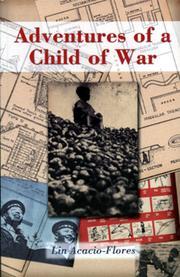 Email ThisBlogThis!Share to TwitterShare to FacebookShare to Pinterest
Labels: Adventures of a Child of War, Lin Acacio-Flores