All happy stories are alike 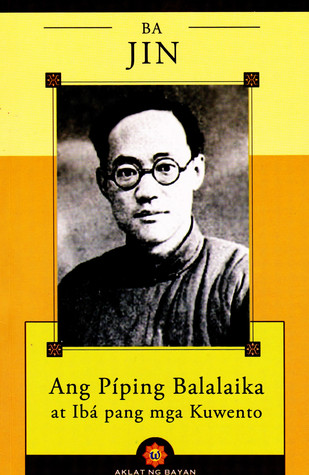 Thus ended "Gabí sa Marseille" (Night in Marseille), the seventh of eight stories of Bajin (1904-2005) collected in Ang Píping Balalaika at Ibá pang mga Kuwento (The Mute Balalaika and Other Stories), translated from Chinese to Filipino by Joaquin Sy. There was however nothing particularly beautiful about the Marseille night in question. Only the irony of the statement was beautiful, leaving a bitter aftertaste for the reader who witnessed hair-raising squalor and poverty in the French port city where the narrator found himself stranded for an indefinite period of time due to a strike of the shipping crew in the docks. While walking at nights in the city, he was propositioned by a thin and wrinkled prostitute, covered in garish make-up and almost his mother in age, who implored to be her customer for the night, constantly mouthing the words "in the name of charity, in the name of mercy, in the name of saving a life" (alang-alang sa kawanggawa, alang-alang sa awa, alang-alang sa pagsagip sa buhay). Devastated with pity, his young educated self could not process the situation that the night in Marseille offered him.

Without exception, Ba Jin's stories in the collection, which were originally published in Chinese from 1930 to 1936, were not happy ones at all. His were sad and frustrating stories, devastating even. The themes were the same as the subject of movies shown in the final story "Paglubog" (Sinking): eksena ng karalitaan, pag-ibig, digmaan, kamatayan (scenes of destitution, love, war, death). That last story directly referenced Chekhov, the writer in whom Ba Jin created a precursor.

The Chinese writer wore his Chekhovian heart in his sleeve. From the opening title story that featured a Russian musical instrument, Chekhov haunted the pages in the cold atmosphere and setting (wintertime China and Russia; other European cities) and the pallor of characters (Chinese, French, Russian immigrants and expatriates). A moral, spiritual, and intellectual malaise seemed to haunt the characters in these pages which, in Filipino translation, must have conveyed the same timbre of loneliness and poetry of the original. Characters could be driven to utter despondency and degradation and poverty. The unlucky end awaiting each was almost a given, pointing to the elusiveness of happiness and the inevitability of misfortune awaiting everyone like death in the door. But there was poetry in the telling, and the collection was coated in the beautiful language of grief and modern varnish of storytelling.

There was no poverty of imagination in situations of poverty and imprisonment. Prisoners all: the characters—literal or figurative prisoners starved of food or freedom and of meaningful existence. They might stoop so low, they might fight to the teeth, they might give up, but their all too human condition was on display.

In "Heneral" (General), the impoverished, disgraced, and alcoholic Russian soldier—forced to live in China because of war and whose wife was driven to prostitution so that the family can survive—uttered his final cry after an accident in Russian language. Of course, nobody around him understood him. Except for the reader, maybe, because we know he said the words in the language we read them.

In "Paghihiganti" (Revenge), with the shadow of indescribable war crimes, revenge was believed to be the pure source of happiness for a character yearning for it against someone called "Nutenberg". After assassinating his target, he realized that the long desired revenge was, after all, a fleeting source of happiness. Now that his enemy was gone, his strength and his reason for living had disappeared as well.

The intellectual writer in the last story "Paglubog" (Sinking) was representative of the spiritual despondency and poverty of 1930s China and Europe that Ba Jin was mapping in his stories. The intellectual was a scholar of ancient Chinese documents and admirer of old porcelain vases who always unashamedly ordered his followers and students to read all kinds of learned books all the time. While holding a book of Chekhov's stories in English translation, the intellectual was unmasked by his former follower and protégé as a pretender and lacking in substance. When the intellectual recommended that his former student read Chekhov's works because they are truly relevant (totoong makabuluhan), the student confronted him and asked his teacher if he doesn't realize that he was like a character in Chekhov's stories (alam mo ba na gaya mo ang mga tauhan sa mga akda ni Chekhov?). The intellectual denied the accusation. His student was persistent: "In bed the whole day, discussing events that happened hundreds of years ago, believing there is a reason for things as they are, letting fate do its own trick on them, without any desire to change themselves ... Aren't these how the characters in Chekhov's stories behave?" (Maghapong nakahiga sa kuwarto, nag-uusap tungkol sa mga pangyayari ilang daang taon ang nakaraan, naniniwalang may dahilan ang pananatili ng lahat ng bagay, hinahayaang paglaruan ng tadhana, walang paghahangad na baguhin ang buhay ... Hindi ba't ganiyan ang mga tauhan sa mga kuwento ni Chekhov?) After this, the professor became silent. Then with pain in his demeanor, he finally admitted to his student that he might be right, that he might be finished already, that people like him are finally done (Maaaring tama ka. Tapós na nga ako, tapós na ang mga táong gaya ko). Looking in pain at his former professor, the student was as if standing in front of a newly covered coffin (Waring nakatayô ako sa harap ng isang kabaong na katatakip pa lámang). The professor's intellectual pursuits and scholarly output were a foil to his inner spiritual decline.

Ba Jin's poor and pitiful characters marched ahead following the template of universal characters in the short stories of a Russian master. In a society hostile to world peace and stability, they led deplorable lives in demoralizing conditions, in a cold, harsh, and savaged landscape of war and days preceding the war, materially deprived and spiritually disconsolate days, days when the inertia of existence is itself unbearable and sad.

All happy stories are alike, each unhappy Ba Jin story is unhappy in its own way.