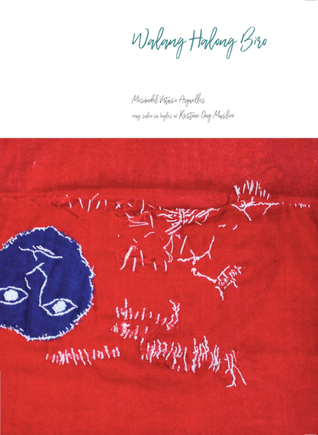 No one was laughing at the expense of the poet. His smirk did not translate into mirth. The poetry book began with an unrecognized joke, signal of the writer's descent into insecurity and obsolescence.
the dead seriousness of me as a failure
[...] long before the fun had begun
But who is laughing now? "Walang Halong Biro" literally means "without a tinge of humor". The comic potential was suppressed even before the reader breaks into laughter, let alone an uncomfortable smile.
The translator was not laughing either. She was stretching her skill set to accommodate the punning technique and find equivalents to run-on words spilling into the next line. She will have to settle and compromise for a word to push the meaning across the waves, as in "Baybayin" (Shore).
Walang inaalong
Damdamin ang mga alon
"No comfort / can be had from waves". Her rendition of lines that sacrifices the Filipino word for "being carried by the wave" (inaalong, with the root word alon or wave) for its homonym, comforting (inaalong, with the root word alo or to comfort). To translate this collection must be more uncomfortable than rewarding.
The Filipino formulation was often double-edged. Mesándel Virtusio Arguelles was a master of subtraction. Cases in point: Pesoa, Gera. In "Anonimo" (Anonymous), the first word was subtracted from the first line, and it formed an entirely new paradigm.
Anonimo
Walang mukha
akong hindi maghihintay
Mukha akong
hindi maghihintay
The translator had to deal with the about face and produce an interpretation of subtraction that totally subverted meaning and differentiation.
Anonymous
No look
of mine says unwillingness to wait
I resemble someone
who will not wait
The poet was capitalizing on the double meaning of mukha ("face", "to look like"). In the first meaning of mukha ("face") in the first stanza, the poet was literally saying "I have not the face / to not wait". In the second meaning of mukha ("to look like") in the second stanza, the poet was saying "It looks like / I will not wait".
I appreciated the translator's mirroring of face from the first to the second stanza and her particular care in contrasting the metaphor (or simile) of face itself as looking like something. The original meaning was slippery enough to cause a frustrating amount of sussing and head scratching. At the level of a word and phrase, the poet was luxuriating in (to borrow the Pessoan concept) the heteronymic power of words (and phrase) to jolt meanings out of lyric rearrangement and (re)configuration of lines and spaces.
gayong hindi naman estranghero
ang mga titik ang bawat
pagitan ang mga guwang
Ako ang mahuhulog pagtawid
sa kabilang kanal ng dila
This could be phrased as:
while the letters are
no strangers, and every
space made up of space
I will fall crossing to
the other edge of the tongue
The translator, meanwhile, surprised me with her bold choice:
although they do not seem that unfamiliar
those letters each of those
spaces in between those loopholes
I am the one lost in translation
at the tongue's other conduit
I liked how the final couplet celebrated the dirty (dead serious) work of translation. It was time to take revenge against the wordsmith's vacillations and ambiguous wordery. It was time to stick to a decision and make explicit the humor between the spaces that separate one stanza from another.
Kristine Ong Muslim did not take the poems in Walang Halong Biro seriously. That was perhaps the reason her translations stood out not only as linguistic counterparts but as counterpoints to an otherwise comical, self-indulgent lines.
The translator put the person/persona into the poem. As when how she ended "Nuit Blanche" with an inspired flourish: " ... the startled gasp of a teary-eyed discoverer of that underwater cave" contra the drier original. She held fast to an individual position, a singular and provocative reading, which is honestly what we can only hope for in a translation, not a literal rendition but a subjective transposition or translocation of meaning from the depths of feelings. A startled gasp.
Virtusio Arguelles's poems derived their vitality from variant meanings of words, from double, sometimes triple, entendres. Words are his "units of meaning", as the translator observed in her afterword. They were also his units of feeling. An accomplished poet like Muslim had the built-in gut feel to slay the original poetics (and idiom) and liberate it from the obvious and literal. Her stance was the spirit of play, and she supplied rhythm to the poet's tragic "Philosophy".
I could not, I said
to myself in the same language
tread
twice
So she made solutions out of seeming poetic confabulations, treading the narrow path of linguistic compromise to compensate for the distorted meaning of a poet high-strung and drunk with comic possibilities. She navigated the lines using auditory cues, as in "On How Silence Can Be Shrill":
Research shows that plugging
the ear of a bat
can make it go "blind"—
The bat had to shriek for the sound to reverberate across the walls of the cave. Without this active remote sensing technique, the bat could never map out its pathway and find its voice. It might as well be tone deaf or shrill. Or it might as well die from the dead seriousness of its intention.
Posted by Rise at 9:50 PM