Footnote to the angel of history


How could Walter Benjamin impute so much interpretation to what the angel in Paul Klee’s painting was contemplating? Was that what the caricature-like drawing actually thinking? As it turned out, there was an alternative image for the "melancholically beautiful" image of the angel of history. In a footnote to thesis IX of his Filipino translation of Benjamin's work, Ramon Guillermo mentioned another fascinating image, the one that was also used as cover page of the translation:

“Angelus Novus”: A painting by Klee (1920) that was for a time owned by Benjamin. But Bolívar Echeverría's [2] conjecture may have a basis: that Benjamin's main inspiration for thesis IX was the drawing called “L’histoire” (History) from Iconologie by H.F. Gravelot and Ch. N. Cochin (1791) (Echeverría 2005, 25y). [my translation]


In "L'histoire", the angel's head was turned to the right. Faced with a specter of destruction around her, the angel of history had chosen not to be a mere spectator. With vigor and passion, she transcribed what was happening in real time. Her right hand held the pen; her left supported the book.

And what of the figure of death in front of her? The old man's back functioned as the writing table, inclined at just the appropriate angle for the angel to write at ease. Like the angel, death was concentrating on his task, very intent to not make the slightest move, full in his support for the angel's role as historian.

And what was she writing about? Presumably something important, so urgent it needed to be put on paper. It had to do with a conflagration, an event that needed an angel to witness and record. We could somehow recognize a man and a woman fleeing a burning city in the background. Where were the rest of city dwellers? It appeared as if they were casualties of some kind of war. The magnitude of destruction was discernible from the smoke covering almost the entire horizon.

Death was assisting our angel historian, but his long scythe was almost leaning toward her left wing. Is writing history akin to a brush with death? Was the angel all too willing to sacrifice her wing just to be able to get a snapshot of war?

And what was that book beneath her? Tucidide on top of a trumpet, muffling the music of the instrument? What was the Athenian historian doing in this apocalyptic setting? Was he providing the framework of history for the angel to pattern her own historical narrative?

And that pointed, pyramid-like structure on the left? It was the one image that corresponded well to the perpetual accumulation of rubble in thesis IX. It was the structure of wreckage that could reach up to heaven, being driven by the storm called Progress (Fortschritt).

The drawing in Gravelot and Cochin's Iconologie certainly was a more illustrative and dramatic representation of the angel of history than Klee's. The reason for Benjamin's indirection, if it was that, may be moot at this point. In any case, the latter's cartoon sketch of an angel, as interpreted by Benjamin, was a helpless historian in the face of storm: his wings were pathetically frozen when struck by the force of the wind. L'histoire, on the other hand, was a more militant angel. She was unfazed by the events unfolding around her, and not even bothered by the sharp scythe of death. Faithful and objective was her transcription of human catastrophe so that the readers would be able to decipher the pattern of folly. Her purpose was clear: to be the conscience and the counsel of history. So that we never repeat it over and over and over again. 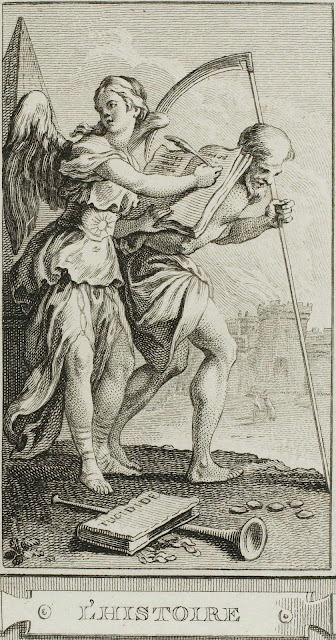 [1] From "Tesis IX", in Hinggil sa Konsepto ng Kasaysayan by Walter Benjamin, trans. Ramon Guillermo. Translation: Where we see the appearance of a chain of events, [the angel] sees one single catastrophe, which unceasingly piles rubble on top of rubble and hurls it before his feet. (from Thesis IX, trans. Dennis Redmond)

Image of L'histoire from: Materialist Theology