"No, thank you," Vince says, looking past her at the mourners, who've turned a somber occasion into a fiesta with nonstop eating, drinking, socializing, and praying the novena, which is held for nine days, starting from the day the person expired. Another mass is said on the fortieth day, when the soul of the deceased leaves the earth for the afterlife. Throughout the novena, sweeping is forbidden because it's thought to chase away good luck.
The yard, lined with potted bougainvilleas, has been converted to a gambling den for mahjong and pusoy—thirteen-card poker. At the end of the night, a percentage of the proceeds goes to the family of the deceased.


The "somber occasion"-slash-fiesta was a wake where Vince, the gay protagonist of Leche, accidentally finds himself while looking for the seedy Leche bar—sex club by night, museum by day. It was an opportunity for Vince to share some beliefs, superstitions, and customs in the Philippines.  Like a culture-shocked tour guide, Vince dished out all manner of things strange or odd about the country. The novel was flooded with facts and factoids, Filipino mannerisms, and all manner of Filipino stereotypes. (And here I insert my own touristic usage guide: Philippines (with an "s") is the country; Filipino is the citizen; Philippine (without an "s") and Filipino and Pinoy are descriptors/adjectives (e.g., Filipino food, Philippine president, Pinoy balut); no such thing as Philippino.)

I chose to highlight here the short scene of the wake because it reminded me of the nine-day custom of pasiám (or pasiyam) that was the narrative structure of Nínay by Pedro Paterno. Nínay was the first Filipino novel, published in 1885. Between Nínay and Leche was one and a quarter century—126 years—of novel writing in/about the Philippines. I called the former a "cultural guidebook or tourist brochure". In Leche, R. Zamora Linmark also offered a "tourist [guidebook] and brochure" [p. 165] prepared by his confused protagonist. Filipino-born, American-raised, Vince was a quintessential Filipino novel character in that his identity crisis while visiting his "home country" was palpable. Whereas Paterno reveled in and celebrated the Spanish cultural influences in Nínay, Linmark could not get past the Spanish and American confluences in Filipino culture. But like Paterno, Linmark could not get past the didactic tradition of the Filipino novel. Didactic as opposed to, say, the revolutionary tradition of José Rizal's landmark novels or the novels by Wilfrido D. Nolledo and Carlos Bulosan. 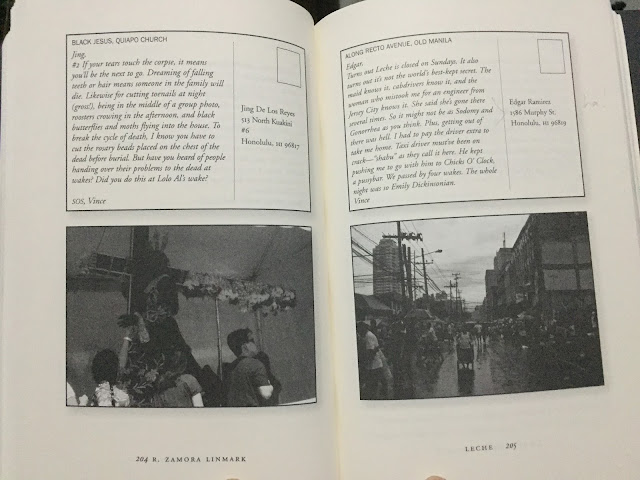 In Leche, the narrative was interleaved with postcard letters and "Tourist Tips". What Vince saw from the frontlines of Manila, he reported back to his siblings, mother, and friend in Hawaii: the quirks of the people and the quirks of "Philippine English" that for him was English language that still needed English subtitles (e.g., "restrooms" are called "comfort rooms" in the Philippines). His confusion and cultural disorientation were boundless. Vince's default register was rant, rage, endless complaints, and extended lectures. Subtlety and restraint were thrown out. Satire and exaggeration were his literary tools. The "Tourist Tips", for instance, reinforced many stereotypes and generalizations about Manila and its people.

Red light means "Gas it!"
One way equals four-way.
Motorcycles speeding on sidewalks.
People living off garbage.
People living in garbage.
Komiks vendor gives birth to mudfish.
Brownout is blackout.
Diarrhea is an acronym.
Where are all these metropolitan hyperrealities exploding from? Where else, but in the Metro Malignant mind of Vince; Vicente; Vincere. El Conquistador. Constantino to the nation's First Daughter. First-class passenger to the city of contrasts and blackouts. The capital of collapsing metaphors and memories.


Vince could not reconcile his childhood memories of the country with the current chaos and disorientation he experiences as a visiting adult. Linmark was so steeped in Pinoy pop culture circa 1991, he could easily deploy satire to defamiliarize current events, celebrities, and political personalities. He was an astute observer of Filipino tics. Fancy channeling all of Kris Aquino's complex antics. He made 1991 a flashpoint in Philippine history: the death of film auteur Lino Brocka, the eruption of Mount Pinatubo, the rise of Pinoy massacre films, the expiration of the Visiting Forces Agreement between US and the Philippines.

In Paterno's Nínay, the ghost of Nínay haunted the Ilustrado-ish narrator as he listens to her story told by the second narrator over the course of the nine-day vigil at her wake. In Leche, Vince was haunted by his memories of living in the country with his grandfather before moving out overseas. In "The Spirit of Nínay", Eugenio Matibag, a professor and scholar of nineteenth century Filipino nationalism, considered Paterno's novel as a kind of "spectral allegory", where flashes of nationalism and nation-formation are implicit in the costumbrismo (local color) storytelling of the "outsider" or returning-from-abroad commentator. Leche's costrumbismo was of a hybrid kind. While oftentimes informative, Vince's commentaries on Philippine life and (pop) culture were often infuriating and patronizing. What gave poignancy to his satire, or what served as its foil, was his unacknowledged longing for family roots and the recollection (haunting) of his dead grandfather.

Manila. The sprawling metropolis that, after being back in it for only four days, is becoming more and more the capital city of Vince's frustrations, daydreams, nightmares, reflections, and wonderment. It overloads his senses, wakes up tastebuds he thought he never had, or had lost, guides him from one darkness to the next, from one window of sadness to the next, from one reverie to the next. It shocks hims with what was once familiar. It assaults him with memories that pull him, break him. It floods him with dreams, his grandfather appearing in all of them, first as apparition then as cameo, with face, body, voice.


Vince's spectral nationalism was rooted in his identification as a Filipino (as he confessed in a riotous TV talk show scene with Kris Aquino) even if he does not speak the language, has spent most of his life abroad, and noticed a lot of negative things around him. He felt offended when people around him do not consider him Filipino. His otherness, his prejudices, his endless tirades against the way of life in Manila—the traffic, the air pollution, the language barrier—these were not a façade. He had a love-hate relationship for a nation and a people he barely knew and yet strove to discover and report back to his relatives in Hawaii. There were some three dozen postcard letters Vince sent from Manila to Honolulu. Each was a spontaneous response to his immediate surroundings, and perhaps spectral instances of his mourning, intimations of mortality, and desire for life.