A Lion in the House


I don't like to write in books with ink. Books heavily underlined and annotated scandalize me. The blank pages and margins of books are not meant to be defaced like a temple. Yet I like to mark them myself with occasional notes. For that I use a pencil, which I like to think makes for a lesser violence, a temporary violation an eraser will set right. So I write on books very lightly. I do not stretch out the books and open them fully flat when I read. I open them at an angle so as not to break the spine of the book. I always read acutely, at an angle less than ninety degrees. If it is a new book I bought I would never settle down for more than the right angle. I dare not open books at an obtuse angle. That is an obtuse thing to do. It is depressing to look at books with heavily curved or broken spines. Or any book with physical flaws for that matter.

I was flipping the pages of A Lion in the House, a novel by Lina Espina-Moore about adultery. Published in 1980, it feels outdated now. Outdated not for being a period novel set in 1980 but for its heavy use of colloquial language of Manila of its time. It has its moments, like the scene of the wife rushing to get his husband from the apartment of his mistress, an apartment the husband was renting out. This section of the novel was recently included in Querida: An Anthology (2013). But overall the novel sounds false to me in 2016. The dialogues do not crackle. It relies too much on the slang, colloquialisms, and high society details of its period. Novels must be felt as if it is new. Its language must sound fresh for all time.

When I started the book I already flipped through its pages and saw the last page and I was vexed at an offending drawing, in ink. I never minded the musty smell and the browning, crispy pages of the old book. I never minded that the book was apparently read by someone else before it was sent to me. But that someone had the luxury of time to make doodles and lettering of a character's name. I was mad at the publisher (I ordered the book from the publisher, from their old stocks) for allowing this to happen and for sending me this vandalized book. I was mad at the vandal-reader for the indiscretion. However ambivalent I felt about the book, I did not like that it was tampered. 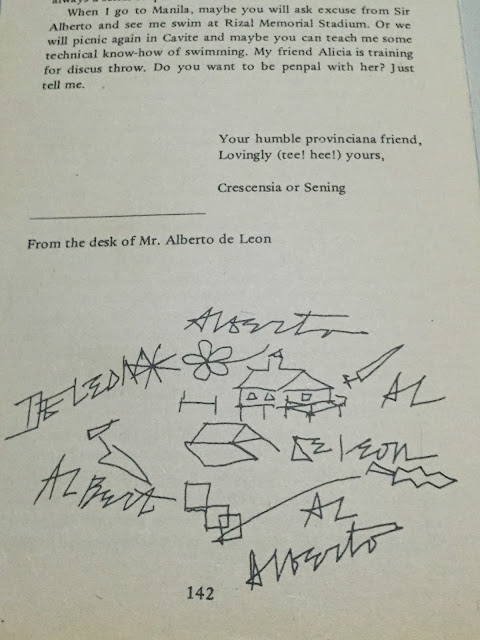 But I would not let this affect my reading. I continued reading and soldiered on to the last pages. The final, epistolary chapter was titled "Q.E.D." I finished the book. Then I discovered the "flaw" was not a flaw at all but part of the "text." But of course. This literary device was not new. I was amused.

Then everything fell into place. The philandering husband, Mr. Alberto de Leon, the "lion in the house", wrote in doodles. Of course. The stoic character whose thoughts were not always accessible in the book. A paper with nonsensical writing in it, from his "desk" illuminated something about his character. A thought balloon appeared, a thought bubble burst. The drawing expressed it all. His inflated ego, his narcissism, his vanity. Therein lay all his psychological complexity. Or his utter simplicity. Flawed as a person, as a lion, as a character. The book and its flaws. Quod erat demonstrandum.