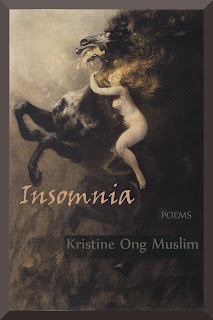 Sleep is an eel coiled
around itself. Tail

in its tail. And judging by
its lack of teeth,

it will not last
the night.


Terse beauty. That just about sums up this poetry collection for me. As with Night Fish, Kristine Ong Muslim's whimsical voice is profoundly wedded to her arresting images. She is a poet who sees miracles in the mundane and whose way with language is unobstructed. The lines often start in a conversational tone, drawing the reader in to every conceivable possibility.

Sleep is an eel coiled / around itself.... The first couplet of "Try Again" is a laconic statement of the state of insomnia, pining for the onset of sluggish nightmare. It is one of the most trenchant variations of Ouroboros. Sleep as an eel, from tail to mouth, tongue in hole, toothlessness. The unobstructed passageway assures the sleeping form that sleep, closure, termination, is a process of infinite regress. The metaphor metamorphoses into itself.

Nothing like the malice of objects: the dank mouths of a sponge, the bent posture of a desk lamp, the sickness of a rickety chair. On the shelf are those books of eyelids, how the cracks between their pages let the light slip in all the wrong places.
[from "The Eater of Saturday Nights"]

A legless ballerina performs her last pirouette. We would have applauded if only we have hands.
[from "No Possibility of Waking Up"]


The lines deliver the punch that is felt hard in the gut. “You wonder whether you are the landscape or the one taking in the scenery. You wonder why the shadows of curved things remain straight.”, she wrote at one point in "The Eater of Saturday Nights".

Whereas Night Fish was concerned with an alternate future reality, in Insomnia the reality is grounded in the secrets of suburbia that spill from an open can of worms. The poems here stare the reader hard in the face until he is inured to the final image. The worms squirm and take root in the mind.

There is a hint of feminism in the collection. Women are represented as limbless objects—"whoever looks into the window and sees the girl-torso looking through it will never notice her lack of limbs, the absence of life, the impossibility of the house housing the girl by the window" ("Impossible House")—living a loveless marriage, the objects of pornography, the victims of hate/crime, or the subjects of an autopsy in a cold morgue.

The perspectives of the wife or husband on the dissolution of marriage, the portrait of a recent divorce, deep cracks in relationships, these are explored through a pile of cutting irony.

Nobody became a widow here; some-
one just turned out to be a frozen head
of a bee after abandoning its stinger
somewhere. One could not hold the dark
long enough to fix it in place. It was like
flicking a feather caught on the maple syrup.
[from "That Portrait of the Missing Socks"]


From the bee voluntarily losing its sting (like giving up its life force, its drive, its appetite) to the feather on a maple syrup (a wonderful image of desperation and futility), the mixed metaphors create an enjambment of sense-impressions. They nudge toward a diagnosis of a suffocating relationship that is slowly and then suddenly entering a quicksand.

Insomnia exposes "the bedrooms we only see in our minds" (as in "Preface to a Pornographer's Dirty Book") through lines that stun and mystify. Muslim's themes cut through the surface of ordinary, sleepy life and stitch new threads of alertness to existence.

My thanks to the author for a copy of her book.