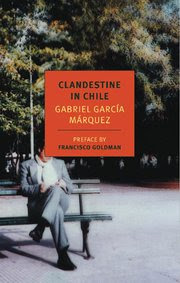 The plan was to film an underground documentary on the increasingly desperate situation in Chile after twelve years of General Augusto Pinochet's dictatorship. I had been unable to get the idea of making this film out of my mind. I had lost the image of my country in a fog of nostalgia. The Chile I remembered no longer existed, and for a filmmaker there could be no surer way of rediscovering a lost country than by going back to it and filming it from the inside.


Gabriel García Márquez faithfully transcribed Miguel Littín's voice in Clandestine in Chile (trans. Asa Zatz), a book of reportage. Littín is a Chilean filmmaker living in exile, homesick and determined to come back to shoot his documentary. To do this he was forced to impersonate a new identity, as a Uruguayan businessman. The transformation was complete: his physical appearance, his accent, and his family history and emotions were calibrated to another person's. This book turned out to be dedicated not only to exposing life under dictatorship but to describing a voluntary "identity crisis" and the large amount of risks a person is willing to undertake in order to practice his art (filmmaking) for purposes he believed were noble. Was it all worth it?

Santiago has always had street vendors but I cannot remember ever having seen as many as now. There is hardly a spot anywhere in the business center where they are not standing in long, silent ranks, selling everything imaginable. They are so many and so diverse that their presence alone reveals the social drama. Side by side with a physician who is not permitted to practice, a destitute engineer, a woman with the air of a duchess who is trying to dispose of her wardrobe from better days at any price, there were orphaned children peddling stolen goods and housewives offering homemade bread. Most of these once successful professionals have lost everything but their dignity. Standing behind their wares, they continue to dress as though they were in their former offices. A taxi driver, once a wealthy textile merchant, took me on a tour of half the city that lasted several hours, and at the end he refused to charge me.


The social drama that Littín witnessed was the drama of ordinary people coping with a changed political and economic circumstances. Daily life under the Pinochet regime was, at surface, a veneer of good times, perhaps just as good as life outside Chile. But deep inside was raging silent protest. There was a persistence for ordinary people to continue existing, always hopeful that a better living condition awaited them, because they remember the benevolent past, and it was enough for them to go on. Littín's account of his clandestine shooting was permeated with feelings of nostalgia. Surprisingly, the main pathos of the story derived not from the filmmaker's film rushes but from his living a double life in disguise. While pretending to be someone of different profession and nationality, Littín was unwittingly recapturing his own identity in the pictures of the country he was taking. The documentary which was ostensibly meant to bring to light the injustices of military dictatorship became the same document that eulogized the country of a man dreaming, of the past and the lost possibilities.

In the book's preface, Francisco Goldman said that the book had acquired an extra-literary life after publication, perhaps even eclipsing the actual film made of it. The author being no less than García Márquez who is no stranger to power, and the subject matter being the strongman Pinochet, the conception of the book was far from neutral. Fifteen thousand copies of the book were burned in Chile to stanch any possible damage it may bring to the regime.

Goldman also mentioned that the book never really produced a memorable scene or image that depicted the horrors of the military rule. This is debatable. It did seem that the narrative style of the book, which stuck to the individual voice of Littín, had filtered the horror to the extent that one reads a dry recounting of socio-political and historical events, not an anguished litany of abuses. García Márquez's nonfiction was consciously written in that style, as he explained in his introduction. In a way, the novelist acted as film editor to Littín's director, cutting out extraneous scenes from a very long interview, trying to work with what footage was available, and producing a whole picture out of the whole intrepid project of an exiled man – filmmaker, citizen, son – going home. The editor constrained himself with faithfulness to the vision of the filmmaker. His stylistic decision certainly did not give full dramatic mileage to the horrors of history which were somehow dampened by the nostalgic voice of his subject. Goldman added that one only need read Roberto Bolaño's novels Distant Star and By Night in Chile, in order to come face to face with evil perpetrated under Pinochet's rule. I agree. These two novels about Chile provide a richer canvas for understanding the uses and misuses of art for political ends.

Bolaño's immediate concerns in Distant Star and By Night in Chile are the heinous crimes perpetrated by writers in the name of literature and the collaboration of the Chilean literary establishment with the totalitarian regime. He employed in his fiction the registers of both the journalistic and the poetic. Like García Márquez, the journalistic was used to report objectively on unspeakable crimes. But Bolaño's treatment argued for an ethical dimension of literature, hence a more powerful discourse of evil was essayed. The merger of the journalistic with the poetic allowed Bolaño to dramatize his scenes and represent evil and its relationship to literature and politics as both palpable and paradoxical. His passionate engagement approached that of Littín's belief in his artistic enterprise.

Clandestine in Chile did contain some unforgettable stories. At least two incidents in the book illuminated how the Chileans reacted to violent abuses committed under the regime. A few months before Littín entered Chile, an opposition militant and sociologist named José Manuel Parada, along with two other activists, was kidnapped by military. Parada was an officer of Vicariate of Solidarity, which was critical of the government and was working for human rights. A few days after the kidnapping the bodies of the three men were found bearing the signs of torture; their throats were cut. Public outrage led to the resignation of the police commander believed to be the mastermind of the murders. At the end of this recollection, it was mentioned that the name of one of the streets leading to Plaza de Armas, the location of the vicariate, "was erased by an unknown hand and replaced with that of José Manuel Parada, the name by which it is now known."

The second incident told of a man named Sebastián Acevedo who set fire to himself after failing to find help in stopping the torture of his two children. His son and daughter were arrested by the authorities. As a result of this sacrificial act, the public was outraged and his children were eventually released from the torture chambers. Acevedo was able to speak to his daughter before he died. "Since that time," the story concluded, "the people of Concepción have had a secret name for the place of sacrifice: Plaza Sebastián Acevedo."

These stories showed that the laying down of life under the cloud of injustice is a sacred act that people do not take for granted. More importantly, it showed that people under the iron rule are not prevented to commemorate in order to honor those who were killed in the name of freedom and justice. In loud protest lies liberty and in the record of memory lies salvation. This was true for Chile then, and perhaps will be true for countries where dictatorships still prevail and where freedoms and rights are curtailed.

Here is one more passage where the novelist was able to capture Littín's speaking voice, where both filmmaker and editor were closely listening to the travails of another artist singing her soul – the whisper of a sweet song – bitter, tender. The speech evoked the blood of history as being perpetrated by the audience's disregard. We only finally listen when we recognize what we've lost.

I sat down on a bench to read the newspaper but my eyes ran over the lines without seeing them. What I felt just sitting there on that bright autumn morning was so intense that I couldn't concentrate. All at once, the twelve-o'clock cannon went off, the pigeons scattered in fright, and the notes of Violeta Parra's most moving song, "Gracias a la Vida," floated from the cathedral carillon. It was almost too much to bear. I thought of Violeta, of how often she had gone hungry and homeless in Paris, of her unfaltering dignity. The system had always rejected her, ignored her songs, and mocked her rebelliousness. A president had to die, gun in hand, Chile had to go through the bloodiest martyrdom of its history, and Violeta Parra had to die by her own hand before her country discovered the profound human truth and the beauty of her songs.

Clandestine in Chile is the December 2010 book selection of The Wolves (Richard, Emily, Sarah, Frances, E. L. Fay, and Claire). Also read by Stu and Lizzy. Check out The Wolves' lineup for 2011.