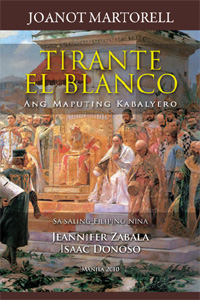 Something Cervantean-slash-Borgesian was detectable in the dedication page of Tirante el Blanco (1490), offered to Don Fernando of Portugal. Here I inverted the sense of literary influence—as in "Kafka and His Precursors" by Borges—with Joanot Martorell (c.1405-1465) creating his own precursors, through his posthumous novel, in Don Quixote and Pierre Menard. It turned out that Tirante el Blanco was a (fictional) translation.

Since the aforesaid tale was written in English, and Your Illustrious Highness has been pleased to beseech me to translate it into Portuguese, believing that as I spent some time in England, I must know the language of that isle better than others do—which request I consider a most acceptable order, for my chivalric vows oblige me to make known the valor of former knights, and even more so because the book's main theme is the code and order of chivalry ... [A]nd trusting that Your Highness will excuse any failings in style or presentation that may have entered this book through carelessness or ignorance, I shall dare to translate it not only from English into Portuguese but also from Portuguese into Valencian vernacular, that my native land may receive joy and instruction from the many worthy deeds recounted. Therefore, I pray Your Highness to accept the present work of his affectionate servant, for should it contain any faults, the blame lies with the English language, some words of which are impossible to translate. Be mindful of my affection and constant desire to serve you, and excuse my clumsy rendering of the various thoughts. Impart them to your servants and others, that they may extract the kernels of wisdom hidden therein, urging on their valor never to shrink from harsh deeds of arms but to champion noble causes, upholding the common good for which the knightly order was founded. [trans. David H. Rosenthal]


In the same manner that Don Quixote was presented as a translation (from Cide Hamete's Arabic into Castilian), so was Tirante a product of linguistic transfer (first from English to Portuguese, and then from Portuguese to Valencian). And it was just like the fictional author (Joanot Martorell the knight) to blame the original English language for any error that may be contained in his narrative.

Tirant lo Blanch was first published in Valencian (Catalan) language, the language being spoken in the province of Valencia. That this book existed in Filipino translation was almost an anomaly. Translators Jeannifer Zabala and Isaac Donoso explained in the introduction the affinity of this work with the Philippine literature during Spanish colonial period, particularly in its thematic links with texts like Florante at Laura by Francisco Balagtas (1788-1862). In 1511, the first Spanish translation of Tirant was produced by Vicent Escartí. An English version was made in 1984 by David H. Rosenthal, and a supposedly more complete translation by Ray La Fontaine appeared in 1993.

Part of the literary value and prestige accorded to Tirante could be traced to an oft-quoted short passage from Don Quixote I, Chapter VI. This was the scene where a copy of the Tirante book was almost fed to the fire during the great book purging of the knight errant's library. If it were not for the priest recognizing the title ...

"God bless me!" said the curate with a shout, "'Tirante el Blanco' here! Hand it over, gossip, for in it I reckon I have found a treasury of enjoyment and a mine of recreation. ... [I]n truth, gossip, by right of its style it is the best book in the world. Here knights eat and sleep, and die in their beds, and make their wills before dying, and a great deal more of which there is nothing in all the other books. Nevertheless, I say he who wrote it, for deliberately composing such fooleries, deserves to be sent to the galleys for life. Take it home with you and read it, and you will see that what I have said is true." [trans. John Ormsby]


"The best book in the world", Tirante el Blanco could very well be in the eyes of a well read priest. Yet this book contained such "fooleries" that Joanot Martorell well deserved to be incarcerated for writing this realistic account of knights eating and sleeping, and dying in their beds, and drafting their last wills and testaments prior to dying. Do we trust enough of a character's (much more so that of a priest's) outburst to believe the author's (Cervantes's) literary judgement of the book? Do we sense sarcasm and double talk in the priest's arguments with the barber? Whatever. Tirante's influence on the quixotic brand of chivalry was enough to ascribe importance to the value of the book.

Running for 972 pages, it was not light reading. With the incessant battles, pageantry, adventures, and violence in it, it truly live up to its reputation as an authentic chivalry romance. Themes of the honor and sanctity of knighthood and military service, the defense of Christian faith at all costs, the villains represented by the Moors, the awe accorded to the monarchy, slapdash of patriarchy. There was a manual here: a code for knights in honor, from a thousand pages of chivalry and cavalry and knighthood occupation being extolled and elevated to the highest pantheon and with knighthood being almost equated with sainthood and priesthood, the highest sacrifice. It was now understandable how the old man Quixote was driven to the brink of wayward knighthood.

The book was divided into seven parts. The first part detailed the colorful life of a count, Guillem de Veroych (William of Warwick), who was a veteran knight prior to becoming a hermit—the horseman becoming a veritable saint. Near the end of this first part, we finally encountered the titular character, who actually derived his name from his father's dominion (Tirania, fronting England) and his mother's name (Blanca).

What made this particular translation an anomaly, or a flawed one, was the preponderance of spelling errors, mistranslations, punctuation errors, grammatical slips, and other mistakes. Each page contained no less than five errors, which was surprising given that the book was supposedly vetted by language experts. The prefatory pages contained endorsements from Komisyon sa Wilang Filipino and The National Society of Filipino Translators.

These errors made the entire publication sloppy. I detected errors prevalent in software with auto-correct function. For example, the word dito (here) replaced by ditto. There was also the repetitive mistake in the use of  ng versus nang.

Fortunately, I still understood the general story being told. From what I have read so far in the book—some 100 pages—Tirante was a revealing work from the 15th century that could still inform the art of the novel and the critical appreciation of the Cervantean and chivalric romances. In its own right this translation was already an accomplishment, but it could have been more. I could only hope that there would be a second edition with all the errors cleaned out by a competent proofreader and the translation thoroughly reviewed by an editor for consistency to the original.