On The Trilogy of Saint Lazarus 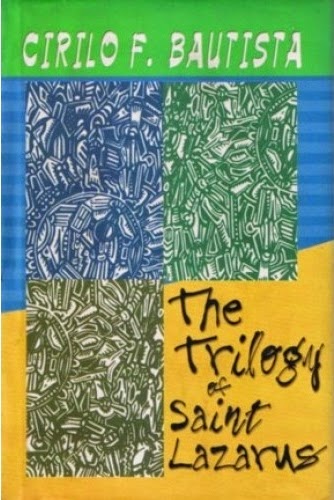 In his foreword to the three collected volumes of his poetic trilogy, Cirilo F. Bautista, recently elected as National Artist of the Philippines, explained his motivation for his undertaking the writing of an epic poem.

In 1967, I realized that I could not be writing poetry all my life. Not only was it impractical for me to engage in a profession patronized by a negligible sector of society but I also had other interests in mind. But before I ceased writing poetry, I had to finish a project that would justify such a stoppage.... I decided I would write an epic trilogy about the development of the Filipino soul from the very start of Philippine history to the twentieth century. I would call it The Trilogy of Saint Lazarus, Saint Lazarus being the original name the Spanish colonizers gave our country in honor of the worker-saint. For it was on March 16, [1521] the feastday of the saint, that they sighted the Archipelago.

The story in the trilogy builds upon the discourses of various [historical] personas—their cogitations, explications, justifications, and interpretations of the significant realities that affected their time and milieu in connection with the nation's struggle for selfhood and freedom. The events and circumstances that connect them are told not in chronological sequence ... but in psychological sequence, the focus being the passionate retrieval of national memories. Each of the voices in the plot relates a story or several stories, and these stories merge and submerge with each other in interrogative and confirmative moods.

Of Malacca, the Portuguese wine bowl in Ior,
Cramped with cloves and nutmegs kings bent maps for, moving
The sun by Papal error higher and lower
Than the fish, amongst waterlilies and metals,
How shall I sing the blood? Ruyfarelo lost in
His islands which like chesspieces lynched their mover.
Serrano gone. Caño, Loaysa, Saavedra:
Gone. If it is a virtue polishes the sword and
Denies its teeth, I am rock who this dark island
Coveted, and am weeping. The ship we rode, the ship
We cut the whales with when powder and prayer would
Not blind their nose—to know how much my foreparents
Stamped their limbs in the vineyard, crushing the olives
And the light to put as by magic chocolated
Bread on a square of table, to hear the clang of ax
That broke butter, will show how lumber rules the high seas,
How salt is the price of sceptre. Gone. Olive. Onion.


The first part of Cirilo F. Bautista's famous lyrical epic is called The Archipelago. It contains some very good lines of poetry. In terms of scope, theme, and stylistic flourishes, the trilogy is a truly national epic. The entire work is obviously a labor of love, having been constructed over a period of years: over three decades! Bautista clearly wanted to display his talent through the use of different poetic registers (sometimes narrative, sometimes dialectical like dialogues in a play), various line lengths and divisions (long lines, short and clipped lines, lines cut at various indentations), and various points of view. The use of lines of various lengths creates a kind of symphonic diversity and makes for a dynamic rhythm and cadence. Like all the good poems, I think this was meant to be recited. It could certainly be adapted as a musical or play. I would have liked to listen to the varied sounds of this poem and see how it will be interpreted on stage, complete with costumes by Spanish conquistadors and native peoples. Some of the speakers are easily identified and recognizable. The voices are dominated by historical figures like Ferdinand Magellan, Miguel López de Legazpi, Limahon, and Rizal. The quotations from historians Antonio de Morga and Pigafetta, etc., in the epigraphs provide a clue as to which historical sources were consulted in the writing of the poem.

The middle part of the trilogy is a departure from the first part's diverse form. In place of variable lengths of the lines, varied indentations, and varying stanza lengths is a strict sequence of quintains (stanzas of five lines) all throughout this second book.

The multiple voices in the first part give way to the single voice of the national hero. The epic shifts from many perspectives and places to one quiet and intimate sojourn in Dapitan, right before Rizal's death in Luneta. Rizal meditates on religion, on love, on armed revolution versus pacifism, on the "house of memory", on life in the city.

The internal rhymes and alliterations are sustained for long stretches. Brilliant really. But rather than staid, straight lines, the rhythm is often broken by punctuations—e.g., by a series of em dashes, or long passages in "quotations"—and sometimes lines within poetic lines are signified by slashes ("/").

The image of the telex is elaborate and complex, but it is playfully introduced.

The sex of telex brings the grex an ax,
tells exactly the factly lack of lex
though in electric stockrooms it is rex;
its shocky hair that shakes the air mirific

connects the coin machines to the dreamers
in the stars, twenty-one ladders to Mars
with no crossroad in the main, and every brain
pulsing to the monetary tune....


I don't completely understand the image of the telex moon but it is quite curious.

once embossed in cornfields and banana groves—
chiselled in emblazonry—coaxes now
to bloom the telex moon! The rooty galax—
the rootless galaxy—the telstar legion

all flow magically to coax the telex
moon! And out of the escutcheon jumps
the telex moon! The fecund—the fictive—
the florid! Telex moon! Pollex moon! For

the City drags its bones by/


Bautista luxuriates in wordplay and fancy word combinations here. Telex is the prototype of mobile phone. It can represent the modern city, its technology and its evils. It can represent modern progress through faster communication. It is an instrument that can bridge the past and present. Sort of like telepathy through time, or time travel. The past and present can coincide through memory. In this section, the story of Rizal still has relevance to the present and still communicates something to us.

The moon's classical meaning is death. And death is constant in the same way that the moon is always out there, a satellite orbiting the earth. Telex moon is the enduring witness to Rizal's despair while in exile in Dapitan and also the same witness to his death in Bagumbayan. Right now, above us is the telex moon, beaming a silent message through light: time is eternal, history is a cycle.

With Sunlight on Broken Stones, it becomes obvious that Bautista is concerned with the political trajectory of Philippine history. This final volume is an ethical poetic sequence describing the challenges faced by the country in instituting good governance. It describes the "broken" condition of the country in the aftermath of colonialism (Spain, America, Japan) and neocolonialism characterized by endemic corruption in government (at all levels!), endless hunger and poverty, oligarchy, and military abuses.

The epic has become a little closer to current events, spanning the period of Martial Law right up to People Power Revolution and the years under Cory. For the Marcos babies, the references to Marcos, Imelda, Cory, and Cardinal Sin are recognizable.

... Why then should I hide
anything when I have nothing to hide? Look
at the medals that fill my chests, and the bright
citations embracing my walls—are they not

the categorical imprimatur on
my legitimacy?


We also hear the first person monologues of national heroes Bonifacio and Rizal and, also from beyond the grave, the dead Marcos despairing over Cory's refusal to allow his corpse to return home from Hawaii.

... "Revenge is mine," says one, and will not
permit homecoming for a corpse. "Must I mourn
till the close of doom?" says the other, and oils
the gearsprings that feed her money. How many
times must memory mock their bright peacock pride?

Tarmac-hero? Christ-like tyrant? Their husbands
are dead weights now though the cardinal with some
crazy name would canonize the first, condemn
the second, as if Virtue resided in
his fingertips.


An interesting passage is one attributed to Tolstoy, from a section which contains one epigraph after another. It perpetuates the cliche (especially among our national writers) about the "collective" imaginings of a race, contained in so-called "national literatures":

However important a political
literature may be, a literature
that reflects society's passing problems, and
however necessary to national

progress, there is however, still another
type of literature that reflects the true
eternal necessities of all mankind,
the dearest and deepest imaginings of
a whole race, one that is accessible to

all and to every age, one without which no
people has been able to grow powerful
and fertile.—L. Tolstoy, 1859.


As to the title, the "sunlight" signifies hope after a long period of shadows and darkness hovering over the "broken" spirit of the Filipino people.

"And what language must rise out of broken stones
that serve as landscapes for a people's desire
to relight the fire of harmony and strength?
Where are they now, the words Jaena splattered
at Barcelona and Madrid in splendid

"subversiveness? Where are the contracts for death,
or for life, that rich men and poor men inscribed
with the blood of their faith in reckless pursuit
of a common rule?"


In terms of geography, the Philippines is a pile of "broken stones" because of its archipelagic nature. In historical terms, the country is broken by colonization of three imperial powers and later (up to the turn of the twenty-first century) by the rule of the oligarchs and the elite, the often corrupt leaders who, with impunity, plundered the country of its resources. Notwithstanding the reign of these modern-day conquistadors, Bautista's elegy ends with an unqualified hope derived, in part, from embracing the lessons of history.