Music of fire in the forest of darkness 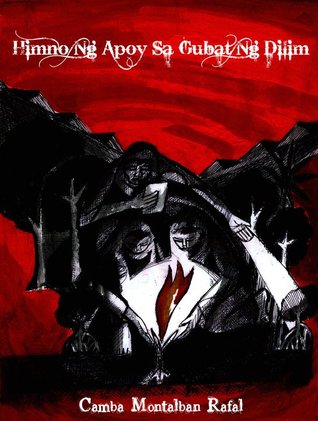 Three young poets met in a book launch and gradually became close friends. They found common grounds on political issues, proletarian causes, and advocacy for social justice. They eventually decided to collect their poems and publish them independently. They called it Himno ng Apoy sa Gubat ng Dilim (Music of Fire in the Forest of Darkness).

The music of the poets' lines were indeed set on fire. They were so intense they glowed, creating a wall of forest fire keeping out the wild animals of the night. Their voices were raised loud from deep within the tangle of vegetation, making readers feel not only the heat but the light of day.

I spent the better part of the first of May listening to the music of these poems. The occasion couldn't be more auspicious. The book is dedicated to "the tillers and toilers of our land" ("para sa mga magbubukid at manggagawa ng aming bayan").

The selection of poems here displayed an uncompromising stance against those in power who perpetuate oppression and human rights abuses. It essayed not only the harrowing condition of marginalized farm workers and ordinary people in a cruel capitalist society. More importantly, it boldly called for immediate action and social reforms to resist that untenable condition.

Some pages of the book were like downsized placards containing the sentiments and exclamations of protestors and demonstrators in the streets. Yet the raging voices were often tempered by compassion for human struggles.

Arlan Camba opened the book with an invitation to the collection's rhythmic, fiery singing. His poems usually began with lines and chants heard in street demonstrations. Some of these may already be familiar gripes, tired and overused, but at the end of his poems, the final lines realigned the familiar protestations into a literal call to arms. The poet was crafting his novel protest through the fortification of his previous litanies of disenfranchisement. By reconstructing the street protest in a poem, it enacted its own galvanizing protest. The electric atmosphere of his protest poems secured empowerment through the power of words.

Here's the final stanza of "Gusto Kong Tumula" (I Want to Recite a Poem). It consolidated the poet's plan of a violent revenge on the bourgeoisie:

And here is the final stanza of Camba's "Saan Patungo ang mga Alitaptap?" (Where Are the Fireflies Going?):

The direct target of the poems was the the ruling class who erected a "forest of darkness" to strangle the poor "weeds", robbing them of sustenance, depriving them of air and the light of sun. The images were necessarily violent as they explicitly dramatized an all out war against the oligarchs.

Pia Montalban, the second poet, continued to fan the flames of the fire that will guide the way for those languishing in the dark prisons of poverty and powerlessness. She did not shy away from depicting contemporary issues that bedevil the present national administration. Issues like agrarian reform and the displacement of the poor were explored through the introduction of female personae, perhaps the poet's own. Her identification with the national body politic, as "Pi(lipin)a" for instance, was an inventive way of communicating a personalized vision/version of reality at the mercy of capitalism. The latter was a threat to sustaining the things that make humans human, like love.


The poet argued for simple art, grounded in reality and abhorring the fireworks of obscurity. If resistance art is to speak, then it has to speak with the legibility of black letters on white paper. It has to be meaningful to the large segment of society, those who are many but vulnerable.

MJ Rafal, the final featured poet, was the most experimental of the three. His poems were diverse narratives of playful forms and subjects. He showed a gift for storytelling and a mastery in the deployment of particularized details, as with the daily struggles of low income workers. If I make him sound like a writer of fiction, that was only because his poems here had an engrossing plot and action.

Below is one poem by Rafal, a sample of the anthemic output of this talented poet. It was dedicated to the memory of Alexander Martin Remollino (1977-2010): the poet, journalist, and activist who was an acknowledged influence and inspiration to many poems in the collection.


The three poets of Himno ng Apoy are rock stars in their own right. One after the other, one catharsis after another, the poems were building into a concert for an important cause: the fight for a just moral order. The music was enough to see us through the night. Hardcore.


Thanks to K.D. for the book. Translations above are mine.