The Jesus trilogy by J. M. Coetzee had a tenuous connection to the Old and New Testaments. It's up to the reader to imbue the text with evangelical significance, if at all. The novelist did borrow stray phrases from the testaments with playful panache ('And who do you think you are?' / 'I am who I am!'). Still, the work was written in the philosophical register rather than the religious. By philosophical I meant the Socratic method with which the dialogues proceeded to elaborate on the weighty meaning of existence. And the prose was as spare as a skeleton: the late Coetzee style, one without any excess fluff or fat in its flesh.

Time passes. Then, early one morning, there is a knock on his door. It is Inés. 'I have had a call from the orphanage. Something has happened to David. He is in the infirmary. They want us to fetch him. Do you want to come? If not, I will go by myself?'

So began David's visible descent into illness and death. It was a story already spoiled by the title. So what remained for the reader to ponder in this novel of foregone conclusion? What payoff awaited the reader in the death of David? I wanted to borrow again Walter Benjamin's words in "The Storyteller":

The nature of the character in a novel cannot be presented any better than is done in this statement, which says that the "meaning" of his life is revealed only in his death. But the reader of a novel actually does look for human beings from whom he derives the “meaning of life.” Therefore he must, no matter what, know in advance that he will share their experience of death: if need be their figurative death—the end of the novel—but preferably their actual one. How do the characters make him understand that death is already waiting for them—a very definite death and at a very definite place? That is the question which feeds the reader’s consuming interest in the events of the novel.

Again, it was up to the reader to imbue the proceedings with import depending on whatever "meaning of life" or of death or expired existence could be derived from the reader's experience of David's actual death in the novel.

In a novel such as this then, devoted to death's unfolding, the premonition of death, the inkling of mortality, was but a part of its philosophical design to investigate the meaning of life and death. But for poor David, being nipped in the bud at an early age, unable to experience the "fullness of life", unable to fulfill his destiny, he will forever be remembered as dead at such a young unripe age.

A man—so says the truth that was meant here—who died at thirty-five will appear to remembrance at every point in his life as a man who dies at the age of thirty-five. In other words, the statement that makes no sense for real life becomes indisputable for remembered life.

It was thus well and good for the novelist Coetzee to kill David not at the end of the third book of the trilogy but by the middle of the book for his parents—Simón and Inés—to remember him for some time and provide a counterpoint for his meaningless life. By meaningless, I meant the meaninglessness of dying at an early age, as compared to the age of dying in the Old Testament days when people lived for such a long time—Noah at 950 years, Abraham at 175 years. Must be the lack of plastics and the nature-based food diet without the artificial seasonings.

In any case, Max Weber's contrast between Abraham's dying at "a good old age ... and full of years" in Genesis and a person's premature death at a young age in our own (contemporary) information overload culture was illuminating. Weber (maybe Coetzee too) was saying that dying at present times was pointless and meaningless because, unlike in the biblical past when there's no more riddle left to solve after living a life full of years, the present was a beehive of conundrums given the intellectual drought each of us will encounter in the face of a mountain of ideas and information. By our inability to make sense of our own place in this information culture, we die "tired of life", in Weber's pessimistic assessment, unfulfilled by the deluge of ideas that are "merely provisional, never definitive".

While the singularity of David's character was fictionally established, his untimely death in the hands of the novelist Coetzee was no mere accident of history. He was representative of all human beings looking at the stars above and asking themselves '¿Pero por qué estoy aquí?' But why am I here? Always with emphasis on aquí, as David repeatedly questioned Simón.

To be fair, the story did present us with fictional conceits, if that was the right word at all, with which to examine the philosophical meaninglessness of a boy's life. It may be better to call these conceits the given givens. Or just premise, the first phrase already bordered on tautological.

The first premise was that the novel existed in or as a (fictional) translation. The locale was Spanish, with Spanish names for persons and places and things. Yet the very English of Coetzee always made a visible nudge to the internal translation from Spanish, sometimes even a direct translation after the Spanish.

'I thought Dr Ribeiro was going to test you for allergies. Has he changed his mind?'

'I've got neuropathy in my legs. The injection is going to kill the neuropathy.'

He speaks the word neuropatía confidently, as though he knows what it means. But what does it mean?

'What are you going to do? says Inés.

Querida. He has never called her that before.

This not-quite translation was the same label given to the favorite story of our dying boy David, the children's book version of Don Quixote which we know (in a sense) to be a translation of a translation. So the novel existed—or was here presented—in the language of Spanish, was actually called Spanish in the novel, and yet was here printed in actual English. In the first book of the trilogy, the boy David sang a song in actual German and his song was said to be in words of English. The reader could make of this whatever substitution between nominal words or language, just like the name Jesus can be substituted for David, or whatever transference from idea to fruition, just like Don Quixote substituted reality for fantasy. It has become almost a cliché to witness how the ghost of Don Quixote's fictiveness haunts novelists to death.

The second premise was the lack of memory of the characters Simón and David who, at the opening book of the trilogy, arrived in the Spanish town devoid of memory of their past lives. In fact, all the characters in the Spanish town were all refugees from places they no longer remember. All their previous lives were simply lacunae. With no origin stories to accompany them, they were forced to live from a blank slate. And this detail the reader had to accept at face value. I'm pretty sure if we interview Coetzee and ask him about this, he would say he could not remember why he began his story like this.

Without a priori knowledge of their past existence, the characters must rely on lived experience alone to give context to their current condition. Therein lay, perhaps, the raw creation or abstraction of meaning from the knowledge systems David was exposed to in his education. Much textual space had been given on how David construe meaning from understanding stars and numbers and dancing the patterns of stars in the book. The stars-and-numbers mumbo jumbo in the book was an instance where David's recognition of meaning from codes and symbols were put forward as articles of faith that one could learn and imbibe according to will. After all, one's encounter and comprehension of knowledge systems or belief systems, however grounded in science or rationality, requires a certain faith to be absorbed into the system.

The third premise was that names are said to be insignificant in the book. This was an idea subscribed to by Dmitri, the "passionate" murderer character in the book who was contrasted to Simón, a "reasonable" yet boring person. (Passion vs. reason was a running theme in the trilogy, particularly in the middle book, The Schooldays of Jesus.) In a postscript to his letter to Simón near the trilogy's end, Dmitri propounded this idea on names.

This was an attempt at misdirection of course. Who cares now why a trilogy starring David is named after a different boy? Jesus, the novelist was being obvious. I dare not say something about referent and reference, signifier and signified. From the rat-like Señor Daga in Book One (daga translates to "rat" in Filipino), we knew Coetzee was up to no good in naming his characters. How about this character on page 62 of Book Three?

Señora Devito is young and so tiny, so fine-boned, that she barely reaches to Inés's shoulder. Her curly blonde hair stands out in a nimbus around her head. She receives them eagerly in her cramped little office, no more than a cupboard really.

Why call a tiny person who can barely manage to fit into a cupboard-like office "Devito"? Seriously, Coetzee? 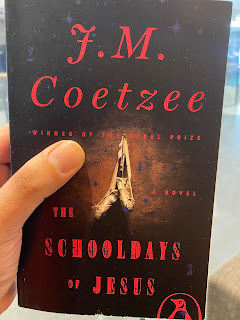