Joaquín and the angel of history 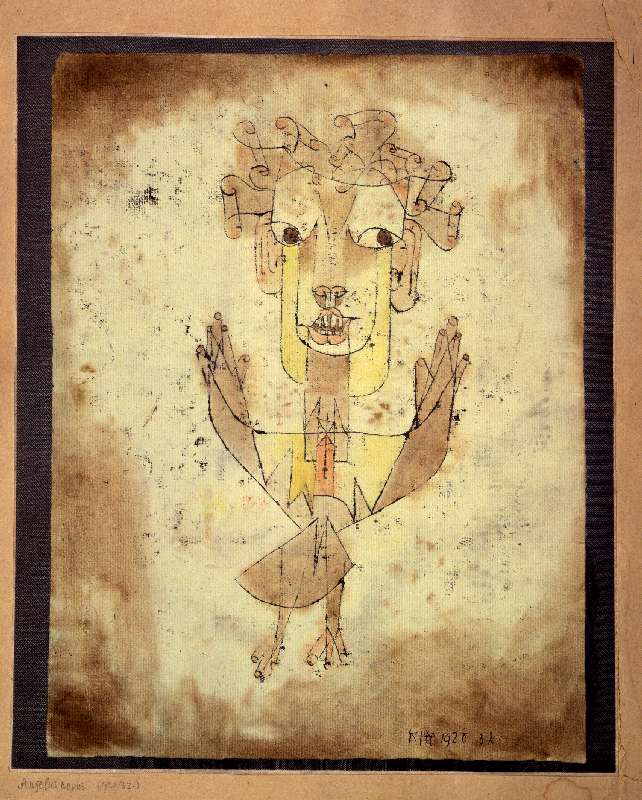 Last February 2017, I wrote the following in a blog post about the impending publication of Nick Joaquín's The Woman Who Had Two Navels and Tales of the Tropical Gothic:

The inclusion of his famous play A Portrait of the Artist as Filipino (1966) in the Penguin anthology was an inspired decision. The three-act "elegy", which the playwright also labeled as "a novel in the form of a play", was a distillation of his romantic ideas on Spanish Filipino culture, its struggle against modernity and war, symbolized by the protagonists—two spinster sisters—and their tenacious hold on a highly symbolic picture painted by their disillusioned father and inspired by Greek mythology. A Portrait was the writer's statement about art and its role in restoring ceremonial traditions, art and its fragility against the savage wars of peace. The writer was much concerned about the inability of culture (Spanish Filipino customs and ceremonies) to adapt to encroaching lawlessness and to reconcile the history of the past with the chaos of the present. Much like Walter Benjamin's "Angel of History" in On the Concept of History (Thesis IX), after Paul Klee's Angelus Novus (1920), Joaquín's elegiac source spring was looking back at the past with the foreknowledge that the future storm would bring ruin to memory.


Vicente L. Rafael, who introduced the book, was reading my mind, and I, his. The book was published in April 2017, and I did not recall reading an advance copy of Rafael's introduction prior to that. The final paragraph of his introduction reads:

Nick Joaquin's stories provide us with such counsel. Swept by the catastrophes of colonialism and war, Joaquin, like St. Sylvestre [in his 1946 story "The Mass of St. Sylvestre"], looked both ways. Lingering on the threshold of what had happened and what was yet to come, he found himself irresistibly drawn, like the Angel of History, to the debris of colonial catastrophes that just kept piling up around him. He sought to retrieve from the ruins of modernity the means for conveying experience—his own as well as others'—in stories about forgotten legends, repressed events, flawed fathers, two-naveled women, and the miracles of a merciful Virgin that continue to emerge from the ever-perplexing and vertigo-inducing history of a certain Philippines. We, whoever we are, receive his stories told from a ruined world, hearing and perhaps sharing them as we would the shards of our own lives.


Rafael provided an endnote to the penultimate sentence:

The image of the "Angel of History," suggested in this instance by the image of the myriad angels surrounding St. Sylvestre as he leads his procession, is of course drawn from Paul Klee's painting Angelus Novus and discussed by Benjamin, "Theses on the Philosophy of History," in Illuminations, 257-58. I borrow the term "vertigo-inducing" from the great historical comparativist Benedict Anderson, who uses it to describe the conjunctural strangeness of the Philippines in world history. See Anderson, "The First Filipino," London Review of Books 19(20) (Oct. 16, 1997): 22-23 [online]. He, too, was an admirer of Nick Joaquin and Walter Benjamin.


Anderson was of course an admirer of Benjamin. He wrote an introduction to the Filipino translation of Benjamin's treatise, Hinggil sa Konsepto ng Kasaysayan (High Chair, 2013), translated by Ramon Guillermo. To me, the image of the Angel of History, in relation to Joaquín's oeuvre, was suggested by Anderson himself, by Benjamin  himself, and by Joaquín himself.

I bought Guillermo's translation in the Manila International Book Fair 2016. According to my Goodreads account, I marked it as "to-read" in October and "shelved" it in the "2016" folder in December (i.e., read the book in the latter part of 2016). Anderson's striking description of the Angel of History was what particularly drew me to it. Here's the relevant passage; forgive the lengthy context at the start.

In the growing darkness of the 1920s and 1930s, Gramsci, the great Italian Marxist thinker and leader wrote, incarcerated in Mussolini's Fascist jails, that communists had to combine "pessimism of the intellect and optimism of the will." Kafka had written not long before his early death: "There is hope, but not for us." Benjamin, who had to flee to Paris when Hitler came to power in 1933, watched Franco bloodily win the Civil War in Spain, Tokyo's armies cruelly occupying a huge part of China, anti-Semitic dictatorships in Portugal and central, eastern and southeastern Europe, France defeated by Hitler and now led by Marshal Pétain's rightwing dictatorship, but only in its southern regions, and Stalin's compact with Hitler in 1939, whereby eastern Europe was divided between them. Benjamin's, [sic] "Theses on the Concept of History", never fully finished, was written in the doomed Paris of 1940. It is from this devastated last work which come some of the most unforgettable, despairing passages. "All documents of civilization are at the same time documents of barbarism" is the shortest, while the most melancholically beautiful is the image of the Angel of History, who has his back to the future and contemplates all human history as an accumulating, unending pile of wreckage, ruin, and disaster. Benjamin wrote that the Angel can not turn his back from the past because his wings are caught in an unstoppable storm coming from paradise, "the storm that we call progress."


Joaquín himself was that same angel of history, enacting the same gesture of looking squarely at the ruins of Manila after the Japanese bombed it in the Second World War. The anguish of the novelist was evident in his elegiac and edgy descriptions of postwar Manila in The Woman Who Had Two Navels (the novel version) as "flat and spiky, its bared ribs and twisted limbs a graph of pain in the air", "traffic brimming between the banks of rubble", "the ruins noisy with night clubs", "a glittering fashion show in the bullet-pocked ballroom of a gutted hotel".

In Nick: A Portrait of the Artist Nick Joaquin (2011)—a biography of the novelist co-written by his nephew Tony Joaquín—the angel of history was pained at the image of destruction and atrocity in the walled city in front of him. The book was quoted in Ruel S. De Vera's review article:

There are many memorable scenes in “Nick,” but probably the most heartbreaking was that of Nick surveying the ruins of Intramuros after it had been razed to the ground during the Second World War: “Intramuros was so familiar and close to Nick’s heart. He knew where each building had stood. As he gazed around him and took in the destruction and realized all that had been destroyed and lost, a deep loud groan escaped from him and his body began to shake all over as sobs rose from the very pit of his stomach.”


I saw Ang Larawan: The Musical in cinema early this year. This adaptation of Joaquín's famous play was full of intimations and prefigurations of war. The role of art, history, tradition, and culture was sustained amid the spreading tentacles of modernity, war, and progress. The controversial portrait at the center of the play, the one owned by two unmarried sisters, might as well be the same horrifying image the angel of history was witnessing: the image that could crush his wings and send him tumbling into the future.